WELLLL GOLLLLLLLLLLLLLLLLY. The Jaguars done won them a game! Join Big Cat Country as we celebrate this win and pray for another against THEM DEVIL CARDINALS.

Share All sharing options for: Cardinals vs. Jaguars: THE BCC PREVIEW EXTRAVAGANZA 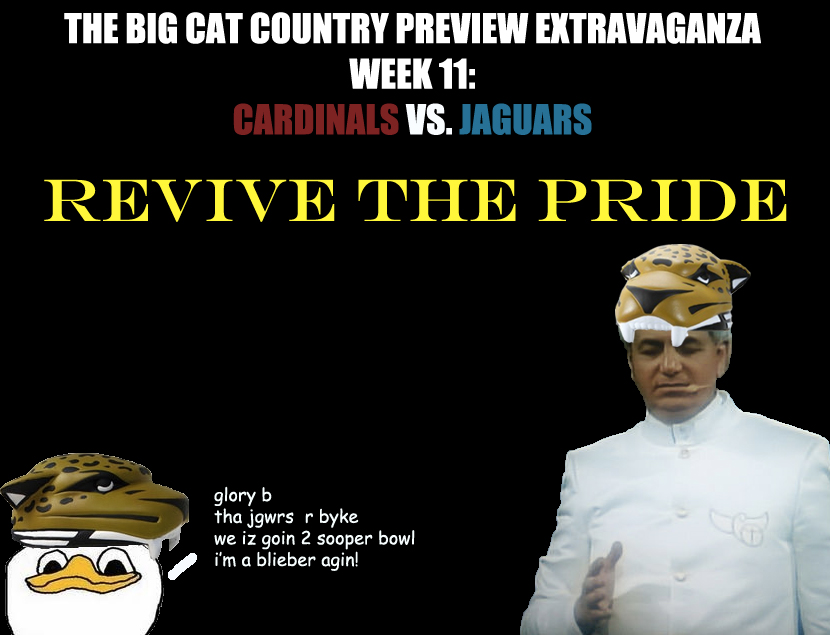 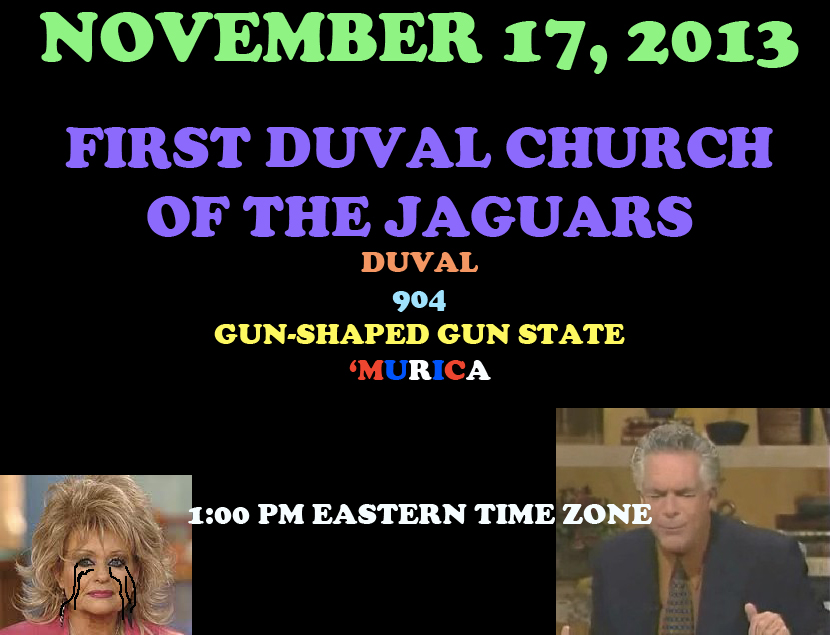 1. Thou shall have no other teams before Jaguars.

2. Thine breath shall smell of the finest beers in all of the land (unless thine ass is shot gunning thoust beers. In that' case, cheapeth shit will do.)

3. Stay away from thy friend zone. It's nothing like the Sea Best Zone.

4. Keep thy hopes low and your standards lower.

5. Covet not thy opponents quarterback nor his defensive end. The thirsty lookth desperate.

8. Do not @th thine players with negativity no matter how drunk, highth, PED ragedth, or drop proneth theyst might appear.

10. Fuckth everyone else and Go Jaguars

Nieces and nephews, we like to thank you for joining our church service today. If this is your first time attending BCCCCCCCC, please fill out the visitor information at the bottom of this bulletin and drop it in the offering plate. We'd love to see you again. If you need prayer, please see one of our pastors listed below and we'd love to spend some time with you. Thanks for attending and my Shad bless. ~ JagsTom

Shad Khan's building pools and scoreboards, y'all. Keith Olbermann's hating, but he still can't do anything about the fact that there's gonna be world-class stuff going on in Jacksonville next year. The Jaguars are going to have big scoreboards and a case for the 2016 or 2017 BCS Championship.

Shad Khan is a 61-year-old boss, and his 31-year-old son, Tony Khan, ain't too bad either. He completely understands the direction the team is headed as, not only a franchise, but a fanbase as well.

I mean...anyone who is excited to give my Uncle a hug is cool with me.

We gather here to lay to rest the memory of Mark Brunell. The best quarterback in franchise history had the opportunity to be remembered as exactly that, but decided to take on the role of "worst Jaguars ambassador ever."

Rest easy #8, it's a shame that Whataburger wasn't where it ended. Eh...whatever, the team needed new best quarterback ever anyway.

As y'all leave this house of worship, here are some inspirational words of wisdom from his Holiness The Marcedes:

Slicing bread off the loaf.

Inspirational word by which we ought to live by. Just as we slice a slice of bread off a loaf (which nobody does anymore because everyone knows if you ask the bakery person at Publix they'd gladly do it free of charge), we.... do something with a knife and it's tedious and time-consuming? Ehhh, let me look for another one...

Ok, so Marcedes is trying to tell us that just as you buy something with a larger denomination legal tender, the change that is left over from that transaction is important. Just like trading a player off for another player and receiving non-nonsensical 6th and 7th round picks. Those picks are change. They may turn out to be a diamond in the smooth, or they'll be a bust. Doesn't matter! They're change! You could be that diamond or that bust. Honestly, YOLO would have been shorter here, Marcedes.

Once upon another time.

Once upon another time, I wanted to be a doctor. Then I figured out being a doctor takes a stupid amount of work and you can't fake it. That's how I found myself in the hell that is law school for three years. Once upon another time you probably wanted to do or become something meaningful to society, but didn't and ended up paying the consequences, but hey you get to wear a suit to work everyday, am I right? I also thought Marcedes could have been quoting the opening lines to the Blues Traveler song everyone knows.

Don't run from where you come from.

Well this is absurd. Technically, this is impossible to do anyway because you're running from where you're coming from or else you're not running at all unless ARE YOU REALLY RUNNING, MAN?

Tissues for your issues.

Tissue paper is a poor substitute for a to-go container or tupperwear. Your grandmother probably took home dinner rolls from Ryan's (RIP) wrapped in tissue paper in the early 1990s, but it's 2013. They have plastic containers for that, son/daughter. Your issues are important. Put them in a to-go container.

Make sure you save a slice for me..

Seriously. No truer words have ever been tweeted. Don't be that asshole that hogs all the food. Like Steve. That asshole partner always takes more than 2 slices of pizza at the office and none of the secretaries can have any pizza. You know who is stuck consoling the secretaries i.e. paying for their lunch? Some young associate. ME. Thanks a lot, Steve. DICK. Wish Marcedes can take out some of that MMA knowledge on Steve. Tissues for his issues for real. Tissues for his face. Asshole. Don't be Steve.

Just as Marcedes believes in people like you, not you in particular, but people like you, we all should believe in something, but be rather nebulous in that particular belief so that we can shape that nebulous belief to fit whatever social construct is popular that day. Miley Cyrus does this.