ESPN's Gregg Easterbrook doesn't know which state the Jacksonville Jaguars are located in, or he's just too lazy to follow through with simple research.

Share All sharing options for: Gregg Easterbrook doesn't know where Jacksonville is

There haven't been as many articles nationally complaining about the new scoreboards being installed at EverBank Field as one would imagine, but I was alerted to a special one from ESPN today on Twitter. It's penned by Gregg Easterbrook, who doesn't have the best reputation as far as integrity goes, but it's also one of the laziest ones I've seen.

I've blockquoted the paragraph below, with their HTML in-tact in case they try to ninja edit the egregious errors.

The fleecing of taxpayers continues:Jacksonville just agreed to pay $43 million to spruce up the stadium where the Jaguars play. Owner Shad Khan, net worth estimated by Forbes at $3.8 billion, will contribute only $20 million. A new hotel tax will fund the giveaway: Ordinary people using hotels in the Jacksonville will pay more so that a billionaire can have a new toy. If the gigantic scoreboard to be funded by the tax sells more tickets, the billionaire will keep the gains. And will hotels in Jacksonville lose business owing to the new tax, or hotel workers face layoffs triggered by an NFL owner's subsidized toy?

Meanwhile a Jacksonville public school district needs $51 million in facility upgrades. The same month Jacksonville had no problem finding $43 million right away for a gift to the NFL, local politicians said the school money could only be supplied over several decades.

The first big error is Easterbrook's notion that this is a new tax that will put burden on local hotels, which could potentially cost people their jobs. The problem with that notion is, is it ignores that it's not a new tax. It's an existing tax that has been in place for a few years already, since oh... 1984. It was modified in 1994. It's not changing. It's not increasing. There is no new burden that wasn't already there.

It's not going to cost anyone their job Gregg. Don't worry.

If you click the "several decades" hyperlink, you'll notice something peculiar. When I initially clicked it, I was a bit confused. I'd never heard of the My Journal Courier in Jacksonville. That's probably because it doesn't exist in Jacksonville, Florida... but rather Jacksonville, Illinois.

In case their copy winds up fixed, it went to this article about the Jacksonville, IL school district.

There are certainly arguments on both sides regarding using public funds for sports arenas, but good God man. You didn't even get any of it right.

It appears Gregg Easterbrook tried to fix his mistake, but no where in the article does it acknowledge that an egregious error was made in the first place. 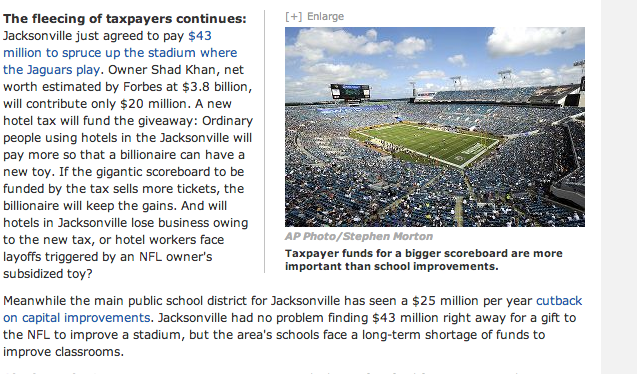 There's not a notation for a foot note, an asterisk, a note from the editor that an error was made. Nothing.

Not only did Easterbrook try to ninja-edit the lazy error away, but he still failed to acknowledge the fact that this isn't a new tax and it's not going to have any bearing on any hotel employee's jobs. Not only that, but I failed to mention the first time that it's not the NFL owner's toy, it's the city's toy, which will allow them more events at the municipally owned stadium that will in-turn pay for the scoreboards.

He tried to save his initial erroneous point by linking to the 2013-2014 Duval County school budget plan with zero context of what it means or where that money comes from or the fact that neither have anything to do with one another. One is being paid for with a revenue bond, which in-turn pays for itself. Though, again, a little research would have lead Mr. Easterbrook to that conclusion. It's clear he still hasn't done any outside of simple Google searching, while utterly failing at it the first time.

@BoldCityCap Use of word "new" corrected -- thank you for pointing out.

It appears Easterbrook once again attempted to correct his mistake, once again without any notation or acknowledgement of a mistake being made. In this correction, he literally just removed the word "new" when he called the bed tax a new tax. But, even his corrections are lazy because he didn't change the corresponding sentences which continue to infer that it's a new tax that will put a burden on hotel employees and businesses. 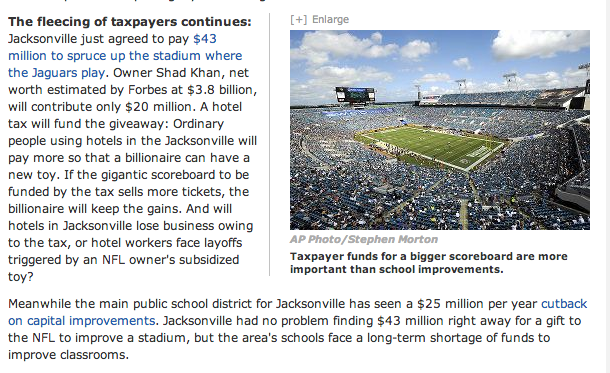 Through the whole ordeal, only one thing is clear:  Gregg Easterbrook doesn't like publicly funded stadiums, which is fine, but he also has absolutely no idea how the EverBank Field scoreboards are being paid for. He also doesn't have much of a grasp as to how Florida schools are funded, which is to say they cannot be funded by revenue bonds.

He also throws in a jab about how "if the team sells more tickets, the billionaire will keep the gains," which is also false. While the Jaguars will gain more money from more ticket sales, so will the city. The city will also attract more events, which are already in the works, that the Jaguars will see no money from.

Since I published this, Gregg Easterbrook has apparently blocked me on Twitter, as well as the Big Cat Country twitter handle. There have also been users who have reported that ESPN is actively deleting comments off the article noting the mistakes that Easterbrook made.

But hey, bloggers are the big danger to journalism. Not journalists, right?