You don't read this part anyway.

Share All sharing options for: Jaguars vs. Browns: THE BCC PREVIEW EXTRAVAGANZA 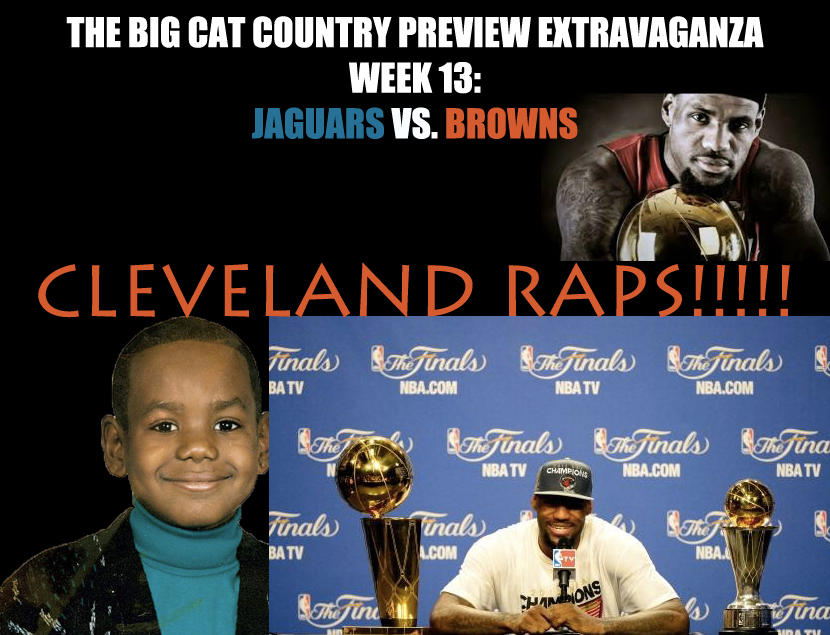 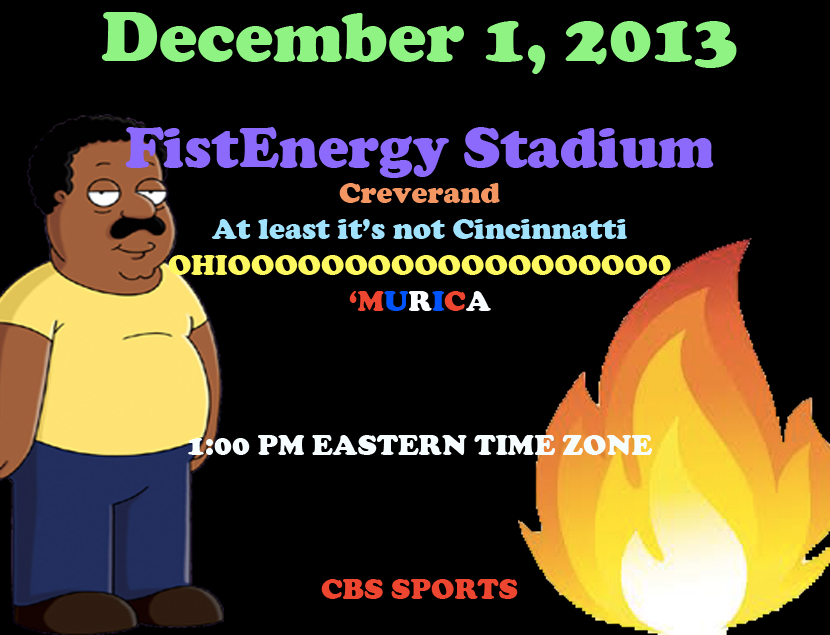 Cleveland: At Least It's Not Columbus

The history of the Cleveland Browns is a long and illustrious tale. From NFL greats like Jim Brown, who the team is named after, to uhh... well.... Michael Lombardi... the team has been flat out electric since its rebirth from the celebrations of Ray Lewis in Baltimore.

For reasons that no one really understands, Cleveland fans dress up like pigs. They wear dumb looking masks on their dumb looking faces and squeal like pigs for hours on end. The fans even squeal when the team isnt playing. If you walk around downtown Cleveland and much of Ohio for that matter, people just squeal. Some people have even been known to squawk. Horrid.

The Browns call their coach, "Chud." His original name was Chode but that was changed after the coach was told what the actual meaning of chode. We here at Big Cat Country decided to give you a breakdown of what a chode is but then we thought better of it. Just know that it is the area that lies between the happy place and bad spot. Sensitive to say the least.

The Jaguars will be going after their third win in 4 weeks. When is the last time that happened? I dont know. Research sucks. Look it up yourself.

Many fans dont want the Jaguars to win this week or for the remainder of the season. What kind of bizarro world is this? Just weeks ago we couldnt manage to put together a drive and now we need to break up the Jaguars so we can actually draft a QB. Unreal.

"But what is your desire, Uncle Chaps? What do you want to see?" Thanks for asking. I wanna see the guys wreck dicks on the field. I wanna see us get better every single week. I wanna see Gus Bradley giving speeches that make Ronald Reagan coo from his spacious and luxurious coffin. Reagan is dead right? If Reagan isnt dead than pick someone else who gave great speeches... someone like.... Bob Barker.

Bob Barker could give a great speech. He was up there spinning that wheel for little old ladies with the tiniest round microphone that you've ever seen. Barkers Beauties were drawn to the job because of the way that Barker held a room captive with his diction. It was non-regional.

To get down to the nuts and bolts of it, the Jaguars will have the Browns on the ropes early. The fans will go nuts. The Jaguars will win so many games that we will have about the 10th pick. Alfie will have to field questions every single day about the 30 possible picks that are rumored to be "the guy." Prisco will bloviate. We will draft Manziel and everyone in Duval will be doing the money sign screaming Duval for 10 years.

Some days (aka all days) I am in no mood to complete a full, independent thought. This takes effort and my effometer reads less than zero most work days (weekends register in the 2 range, depending on which food truck shows up at the bar).

So, how does one overcome? Simple. Take the ideas of one and resubmit them as your own. No repackaging needed.

In 1993, writer's block had a panacea: just take the glue stick out and scissors, find a better article, and cut and paste that bad boy on your page and turn it in. (If you were clever, which you were, you'd photocopy that so that it wasn't completely obvious that there's two pieces of paper glued together. But you were also lazy, so lazy outweighs cleverity).

In 2013, you couldn't commit murder without being caught by a snoop. Someone got caught lying this week. Imagine if Reddit were around when Nixon was president. Watergate would have never occurred because, a week after his inauguration, some Redditor would have discovered Nixon's secret love affair with Vice President Spiro Agnew and Nixon would have resigned out of embarrassment (and if you don't believe that Nixon and Agnew were secret lovers, 1) why did Agnew resign abruptly in 1996 and 2) prove to me that they didn't have an affair).

So I'm out of ideas. I have nothing to contribute, but would like to contribute. I could just repost Chap's section and call it my own and let the comment section try to cipher through the confusion, but that seems too obvious. There's got to be a better way.

When I root for a team, I like them to win. That's generally how rooting for a team works.

I'm a Jaguars fan and as a Jaguars fan, it's good to see the Jaguars win. Especially games where they make teams like the Titans and Texans lose. It's hilarious. The other players get offended that a team like the Jaguars could beat them. They're embarrassed, I'm entertained. Fun all around.

I really don't like rooting for a team that's losing. When a team loses, it's preferable that it's not the team I root for.

The Jaguars have lost a lot recently, and really it would be nice for it to end. But they just aren't very good. And sometimes losing can better set up a team to stop losing. Sometimes winning now can make winning later harder.

If the 2011 Colts did just a little bit more winning, the 2013 Colts probably wouldn't be doing much winning.

Will I be sad if the Jaguars lose on Sunday? Nah.

Will I be sad if the Jaguars win on Sunday? Definitely nah.

I like Teddy Bridgewater a lot, but I like the Jaguars more. So...I just watch. I root for the Jaguars and when it's over I usually just go ¯\_(ツ)_/¯.