This Sunday the Jaguars travel to Tennessee to take on the Volunteers. Let's see if the Jaguars can out-coach Lane Kiffin and Peyton Manning. Hell, I heard Coach Majors may make an appearance.

Share All sharing options for: Jaguars vs. Titans: THE BCC PREVIEW EXTRAVAGANZA 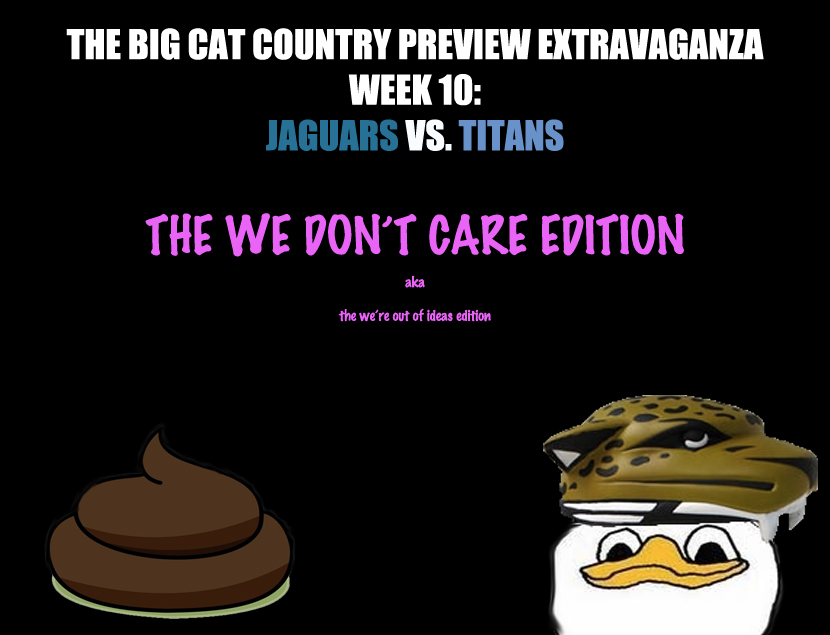 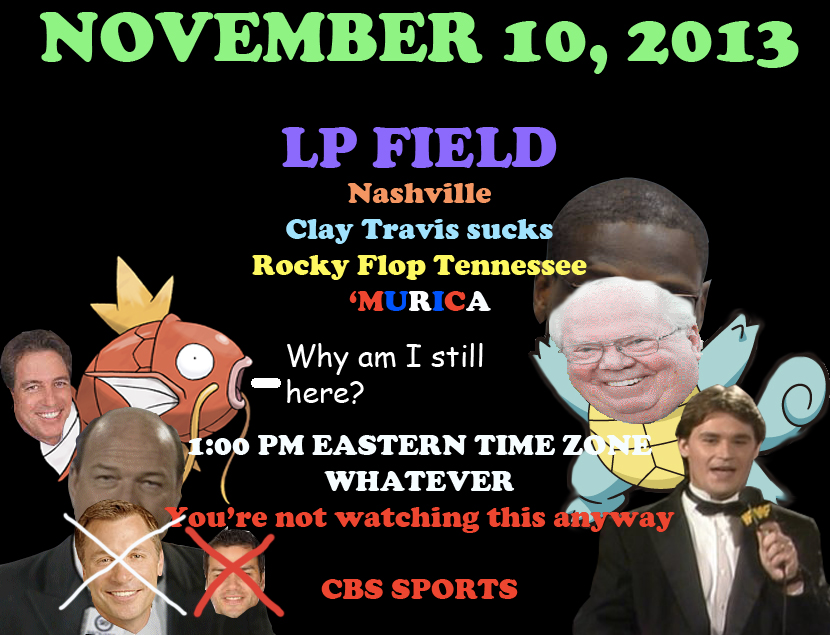 Elvis Died On That There Commode

In Tennessee, the rivers flow like wine. The Jacksonville Jaguars are in for a real treat as they travel to a top 3 tourist destination in the entire world, Nashville. Nashville, home to Motown Records, is the music capitol of the mid-south.

Cecil Shorts III spent a majority of the week blinking.

Dez Bryant's suspension from the Jaguars comes as a tough blow for the team coming off their disastrous loss to the Bye-week. Head Coach Gus Bradley commented to Vito "we feel like we held the bye week in check for the 1st quarter of the first week and then things kinda got away from us. We will have drastic changes to our lineups in that there will be absolutely no changes." That's refreshing to hear from the head coach.

Denard Robinson set a personal record of three straight off days without a fumble. He was seen holding his Gustafson's farm chocolate milk high and in the pocket of his shoulder. Everyone cheered. No update on his shoelaces.

The Jaguars will be the first team to try to play this game without a quarterback. Dave Caldwell explained the move "Some of our quarterbacks have had such bad QB rating that we believe that the defense will have a longer break if no one snaps the ball on offense. Right now, after going three and out everytime, the defense gets about 1 and half minute. If we keep taking the delay of game penalties for 25 minutes at a time, the defense will be rested. Bryon Anger can out kick the coverage from the one yard line nor can he make every kick a touchback so we feel that this greatly improves the team."

Safety Jonathon Cyprien continues to try and get "CypSquad" to stick. It doesnt look good. #ChapsSquad.

Sent from my iPad

Sing Your Own Damn Song

I heard there are Subway restaurants in Nashville.

There are Subway restaurants in other places too, but I'm not a fan. Why? Because they don't know how to make a sandwich and make me tell them how. But I don't know how.

I point at the sign that says "Chicken Bacon Ranch Melt" and they ask how big. That's fine. I can make that decision based on how hungry I am. But then they follow with a question about the type of bread I want.

I'm not a bread expert. There are some that taste good and some that taste bad, but I'm not a sandwich maker. Chicken, bacon and ranch dressing go together, but with what? I don't know...not my job. I usually just say white bread, but that could be a bad decision... ¯\_(ツ)_/¯

But nothing bothers me more than the question "toasted or untoasted." How am I supposed to know that one? See that sign above your head that has a picture of the sandwich I ordered? I can't tell if it's toasted or not. If it is, please toast that sandwich.

Oh and while you're at it, put the type of vegetables in it that are in the picture too.

I heard a report on 1010XL that 43 percent of Subway employees are Titans fans. The Bold City Football Show refuted the report, but they don't give away T-shirts for hitting 5,000 followers, so I believe them less. The Titans are only 3 percent of the NFL...making that a pretty crazy stat.

Everybody take a knee.

What passes for country music these days sucks. Go ahead, get offended. I don't care.

I'm tired of people that don't know the difference between a tractor and a backhoe singing nasally about how they love taking their stupid lifted truck out yonder to the lake to get muddy and have a little lovin'.

I'm tired of people sangin about how they done fell in love with tha luv ov thar lahf and how they is fixin to have a wonderful mehraje and they is so blest to be living in tha U Ess of Eh.

I don't need some suntanned tool telling me about how life is on the islands and how their margarita matches his cowboy boots. You think Merle Haggard ever stepped on a beach? Look at that guy. Helllllll no. I tell you what, country music back in the day was more gangster than gangster rap was in its heyday.

Country music is an attitude and the people that are supposedly country these days are plumb out of it. They are too busy trying to placate to Moms driving to Zumba and Dads driving to their shitty accounting job who think driving a pickup truck or SUV (when you know damn well you're never going to haul shit in that thing and just wasting gas like an idiot) is country and authentic.

There is nothing country about singing about lifted trucks and living in a small town and how much you love your life and how daiquiris are awesome and frat parties and falling in love and all that other bullshit. That's not country, that's trashy.

Stop listening to this bullshit and thinking that you deserve to wear boots and a hat like JBL on RAW. You're as country as chain-store BBQ. Y'all ought to be ashamed of yourselves. Bunch of jabronis.

Stop listening to this bullshit.

To hell with your country music, Nashville.