The Jacksonville Jaguars finished the 2013 season with a 4-12 record, but the feeling heading into the offseason is completely different than in 2012.

The Jacksonville Jaguars 2013 season ended about how many expected it to, winning more games than they did in 2012 and looking like a better team in the second half of the season. While just winning four games in his first season as the Jaguars head coach, Gus Bradley doubled the win total from the year prior with arguably a much worse roster. 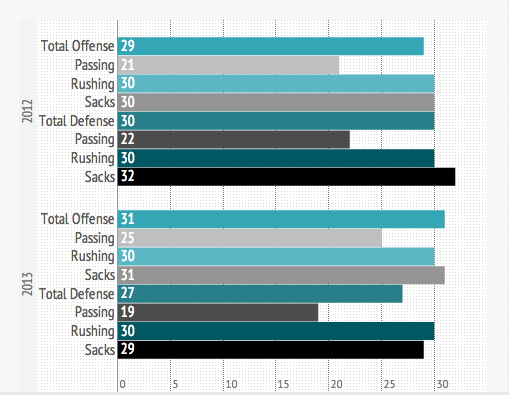 Not only did Bradley get quite a bit from quite a little, he also began to instill an obvious culture change at EverBank Field and improved in quite a few areas.

Many thought the Jaguars would end up winning only a handful of games, which they ended up doing at 4-12. In fact, we nearly nailed the Jaguars record in his preview for the 2013 season.

5-11. The Jaguars gutted a lot of their roster and improved in some areas, but big question marks at the quarterback position and at pass rusher on defense is going to have an impact on how they fare during the season. The team was close to winning five games last season and with an improved offensive line and playmakers they should be able to get there this go-round.

The two big keys noted in that however were still big areas the Jaguars struggled in 2013 and areas they're sure to address be it in free agency or the NFL Draft.

The team started the season with Blaine Gabbert, which was pretty much a disaster. He got hurt and Chad Henne came in and it wasn't much better. Eventually Henne took over as the full time starter and was good enough to let the Jaguars stick around in a few games and win four of them, albeit needing plenty of turnovers to get it done.

The offense was still really bad, struggling to run and pass the football. Not only that, but the Jaguars actually scored less points per game in 2013 (15.8) than they did in 2012 (15.9), but managed to double their win total, because magic I guess.

The biggest and most notable improvement through the 2013 season was on the defensive side of the ball, notably in the secondary and the pass rush.

The pass rush still wasn't very good, but through some smoke and mirrors the staff was able to get production out of someone like Andre Branch, who a lot of us thought wouldn't even make the Jaguars final roster. The Jaguars also found a few gems in free agency in Sen'Derrick Marks, who just signed a four-year extension, as well as Alan Ball and Will Blackmon.

The latter two were part of a secondary that was light years better than what the Jaguars have seen the past few seasons. With rookie safeties and a Seahawks castoff in Winston Guy, the Jaguars saw their play progress and improve week to week. It was capped off with second-round pick Jonathan Cyprien being all over the field and in nearly every play in the final game of the season against the Indianapolis Colts.

The 2013 season hammered home once again the Jaguars drastic need for a quarterback and a pass rusher that they don't need to scheme up to get sacks. Both of these could be attainable in the 2014 offseason, however.

The 2013 season was a foundation building one for the Jaguars. It showed their weakness, it showed them grow and it gave a lot of fans some hope for the future under Gus Bradley and Dave Caldwell.