The Jaguars will likely be looking for a mobile quarterback in the 2013 NFL Draft.

Share All sharing options for: 2013 NFL Draft: Matt Scott could be Jaguars target

The Jacksonville Jaguars will be looking to bring in competition at the quarterback position in potentially both free agency and the 2013 NFL Draft. One quarterback who's already been linked to the Jaguars is Arizona's Matt Scott, who's rumored to be a favorite of Jaguars quarterback coach Frank Scelfo.

It really puts a lot of stress on the defense and forces you to be more accountable with all your assignments. -Gus Bradley

The recent trend lately in the NFL is to have a quarterback who can pick up yards with his leg and run some read-option or pistol wrinkles on their offense. Multiple teams had success with it in the 2012 season, including the Seattle Seahawks while Gus Bradley was the defensive coordinator, with a rookie none-the-less. Bradley saw what Russell Wilson could do and also faced off against Colin Kaepernick and Robert Griffin III, so he has a bit of a unique perspective.

Bradley sees that ability to pick up yards with the quarterbacks legs as a desirable trait in a quarterback, to pair with his ability to pass the football, which is something Scott could bring to the table.

"What puts stress on a defense is even if a quarterback can get 40, 50 yards rushing and it can be like Aaron Rodgers," Bradley told the media at the NFL combine. "It doesn't have to be the read option, it can be with scrambling ability."

Scott played one season at Arizona, under head coach Rich Rodriquez in a read-option style spread offense. Scott finished his final season throwing for over 3,600 yards with 27 touchdowns and 14 interceptions, including over 500 rushing yards and 4 rushing touchdowns. While Scott has the ability to run, it wasn't something he relied on as a quarterback and wants to prove that prior to the draft. 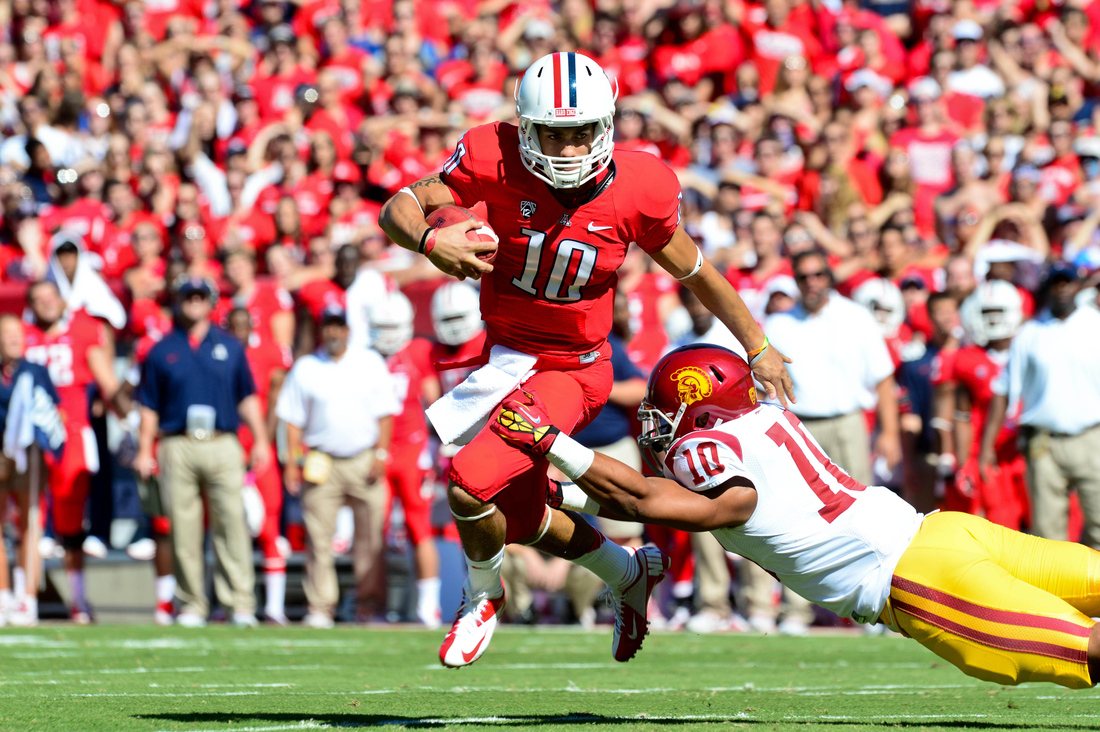 "I just want to show them I can be a quarterback in this league, an effective quarterback," Scott said at the NFL combine. "I think a lot of people have a notion that I'm a scrambler, not really much of a passer. I feel like I'm a pass-first, and then scramble if that's the case."

Scott was trying to fight the "running quarterback" label by attending the East-West Shrine Game and showing off some of his arm talent, which is there, but also showed off his inconsistent footwork and erratic accuracy that comes from it. Scott also showed off his athleticism at the NFL Combine, posting the third fastest 40-yard dash time coming in at 4.69 seconds. Where Scott really showed being quick on his feet were in the other agility drills however, posting the best 3-cone time (6.69) and the best short shuttle time (3.99) coming in significantly better than his counterparts.

The physical tools aren't what's going to limit Scott at the next level however, with his athleticism and at 6'2" and 213 pounds, he has what most teams look for in that regard. The biggest questions are his ability to consistently make accurate throws and read the field, which is something he wasn't asked to do a lot of for Rich Rodriguez. This isn't to say Scott doesn't have the ability to do it, but we haven't really seen it from him.

Typically in a Rich Rod offense, the quarterback is asked to make single or half field reads, then run with the football. It also will generally use a lot of quick short passes to eat up yardage as an extension of the running game. Scott has showed the ability to make the stick throws and passes down the field however, he just wasn't asked to do it a lot at Arizona.

"Scott's draft grade has been ascending since September, and he made another positive impression on scouts at the combine," wrote Tony Pauline of USA Today. "He looked comfortable and confident on the field Sunday and delivered his passes with speed and accuracy. His timing was a bit off, as receivers were waiting on throws, but general managers around the league are excited about Scott's potential after his workout."

Being as the Jaguars have Scott's former college coach on their staff, they should have a great idea of what he can bring to the table. Not only that, but if Scott is drafted by the Jaguars, he should have a smooth and comfortable transition into the offense.

Currently Scott is believed to be a mid-round pick.