The Jaguars have the NFL's 9th smallest video board right now.

Share All sharing options for: New Jaguars logo: Team has plans for NFL's largest video board

During a press conference on Tuesday that will be most remembered for its reveal of a new Jaguars logo, team president Mark Lamping revealed that the team is in the preliminary stages of plans to upgrade the video board over-looking the endzone.

In the presentation, Lamping showed an infographic that shows the Jaguars among the latter half of the league in terms of video board sizes, but said that a new potential video board for Everbank Field could rank as the NFL's largest: 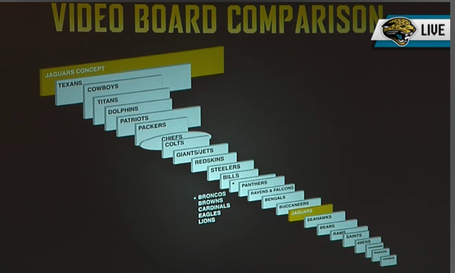 Seeing as a it's just a concept for now, the video board is not under construction or even set to be under construction, but is an idea that the Jaguars are looking into, although fans probably shouldn't expect to see it during the 2013 season. Lamping made clear, though, that a potential upgrade of the scoreboards "will finally give us something where we are the best" and that they are looking to "make Jacksonville a destination."