Share All sharing options for: Geno Hayes signed by Jaguars

The Jacksonville Jaguars have signed free agent linebacker Geno Hayes, according to a report by John Oehser. Hayes spent four seasons with the Tampa Bay Buccaneers, including one season with Gus Bradley as his linebackers coach, before joining the Chicago Bears in 2012. 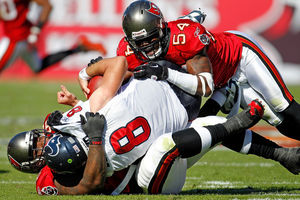 Geno Hayes is small, fast and ridiculously inconsistent. He will have plays and sometimes games where he looks great knifing into the backfield, but more often than not he'll run himself out of the play or get walled off. One upside: he's okay in pass coverage.

Hayes, 25, was a late round selection of the Buccaneers who played in a rotational role as a rookie before taking over as an outside linebacker in 2009. He steadily improved in the Tampa Bay defense, but struggled in his final season with the team and didn't garner much interest in free agency thereafter.

Hayes has played both strong side and weak side linebacker, but it sounds like he may play both. "They want me to move around, since I've played both of them, and see how either one goes - we'll go from there," Hayes told Oehser.

In the Jaguars defense however, Hayes will be reunited with his first NFL linebackers coach and has a lot of potential as a weakside linebacker that recorded seven sacks in two seasons in 2009 and 2010.