Share All sharing options for: Jaguars DT Roy Miller won't show up on the stat sheet

The Jacksonville Jaguars made one of the more savvy moves in the 2013 NFL free agency period by signing defensive tackle Roy Miller. Miller, 25, is a presence in the middle of the defensive line, especially against the run. 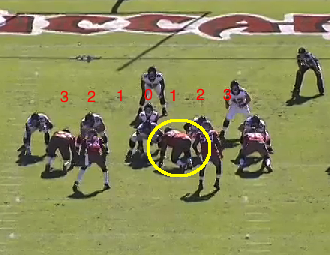 In Tampa Bay, Miller lined up as the "one-shade", which is the one-technique playing the gap between the center and the guard, but shaded more towards the center. It's similar to what Brandon Mebane did in Seattle's defense, which essentially allowed him to two-gap from that position and soak up blockers.

Miller offers virtually nothing from a pass rushing perspective, but really that doesn't matter given the defense he will now be playing in with the Jacksonville Jaguars. The Jaguars will be employing a 3-4/4-3 hybrid front, much like the Seattle Seahawks under Gus Bradley and it requires the use of a nose tackle to make everything work how it should.

"Well, essentially [the Bucs] play an underfront and McCoy is the three-technique and Miller is the nose-shade. And in that kind of defense, the nose-shade will not put up stats," NFL Films senior producer Greg Cosell told JoeBucsFan.com about Miller. "The nose-shade often gets double-teamed; the nose-shade allows a guy like Lavonte David to run free. That is his job. His job is to stalemate and defeat double-teams, eat up blocks."

This will be exactly what Miller's job will be for the Jaguars, to eat up blocks and running lanes, which will funnel the ball to where the defense wants it to go.

"Roy Miller will not appear on the stat sheet," Cosell told JoeBucsFan.com. "That is not a reflection of anything that he is about as a player."

The Jaguars gave up a staggering 141 yards per game on the ground in 2012 and their interior defensive line was pushed around by opposing teams. Miller was a big reason for the Buccaneers being No. 1 against the run last season and he should be a big boost to stopping the run for the Jaguars in 2013.

• List of NFL free agents: Players still available for the Jaguars to target