The next prospect we're going to look at is Syracuse quarterback Ryan Nassib who's stock is all over the place depending on who you talk to, which isn't uncommon for the 2013 quarterback class, but both Russ Lande of the National Football Post and Greg Cossel of NFL Films rank Nassib as the top quarterback in this draft class. 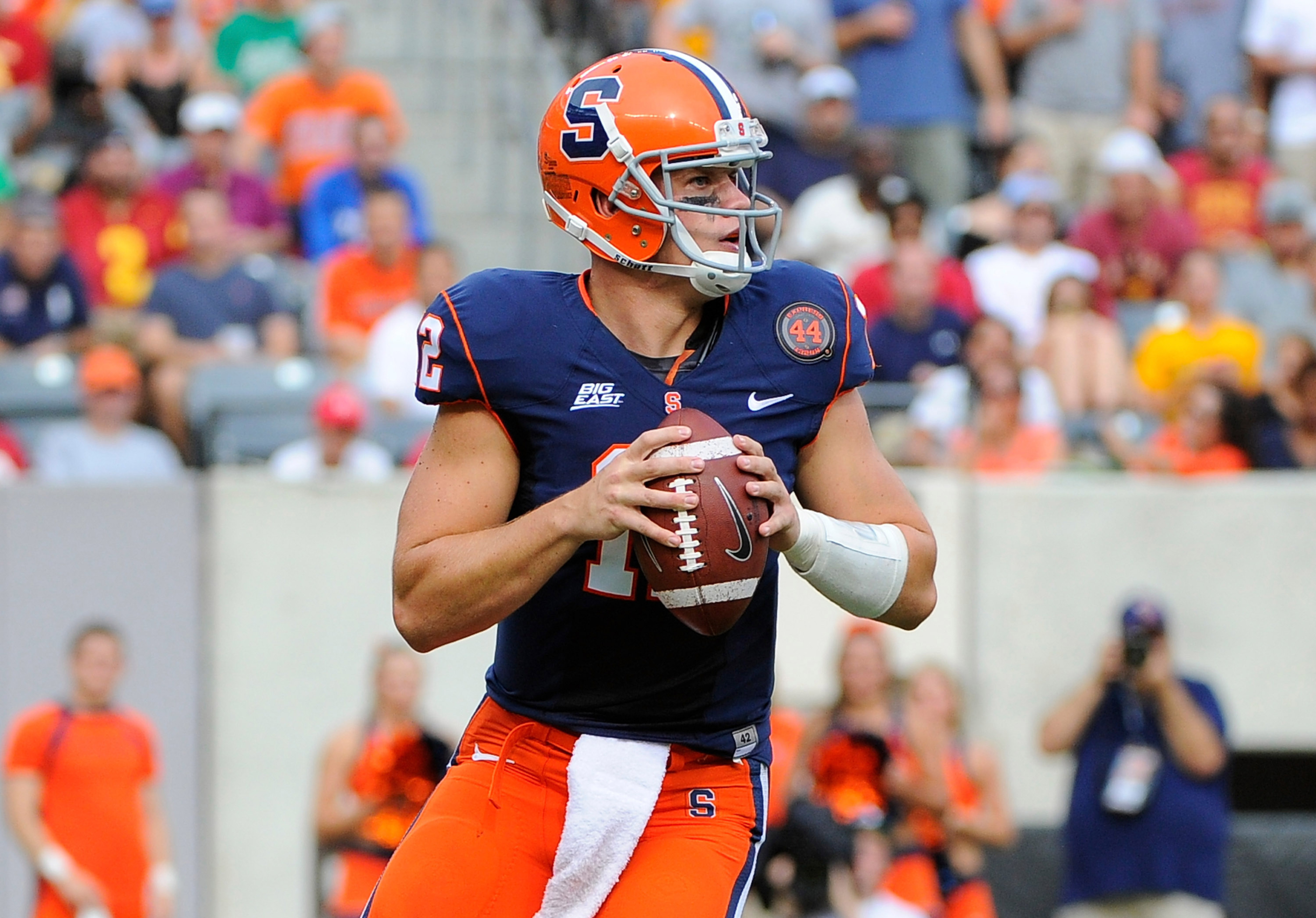 Nassib is a well built quarterback at 6'2" and nearly 230 pounds, but he has some ability to run with the football when things break down. He ran some read-option concepts at Syracuse, but he's not really a "runner" as a quarterback. Nassib has a strong arm, at times, and can make all of the required NFL throws. I say "at times" because he seems to have a tendency to float his deeper passes despite displaying good velocity on out throws. Throws deeper down the seam he puts a lot of air under the ball and misses down the field more often than you'd like.

While Nassib seems to do a decent enough job coming off his initial read, he can force passes trying to make a play and locking on to receivers. He's also a bit robotic throwing the football and just doesn't seem all that fluid.

Nassib's game against USC was kind of a tale of two halves. In the first half he really struggled to hit his receivers beyond 10 yards and did his most damage on outs and quick screens or dump off throws. Early in the game he had an ugly interception where he rolled out trying to make a play and hit the USC defender right in the chest. He tried to muscle a ball in between defenders while getting tackle from behind and it just didn't work.

He also missed on a lot of passes down the field and seemed to "aim" a lot. Rather than leading his receiver the throws would often be behind them or just completely under thrown, especially on deeper fades. As I mentioned before, he seems to sail a lot of his deep passes and put are under them despite showing plus velocity on the shorter routes.

In the second half Nassib seemed to settle in more and began hitting on those deeper throws, but more often than not the receiver had to wait on the ball and make a play with a defender on him rather than catch it on the run.

Against Louisville, Nassib starts the game off with one of the deep passes that's a bit concerning for me, as his receiver is behind the secondary but he puts too much are under the ball and the receiver has to slow down and slide catch the pass, rather than catch it and keep running for the touchdown.

Nassib seemed to have the same "aiming" issues he had in the USC game, which was more of him throwing to receivers rather than throwing to where they would be. He seemed to look off throws against Louisville however and actually attack the middle of the field, taking advantage of the safeties.

Still though, a lot of the time the receiver would catch the ball while stopped or have to make a twisting catch because the ball was thrown behind them or to the wrong shoulder.

Overall I think Nassib is going to be starting material in the NFL, but if he can't improve his velocity down the field and begin hitting guys in stride, he's going to be limited. For me, Nassib is a second or third round guy.