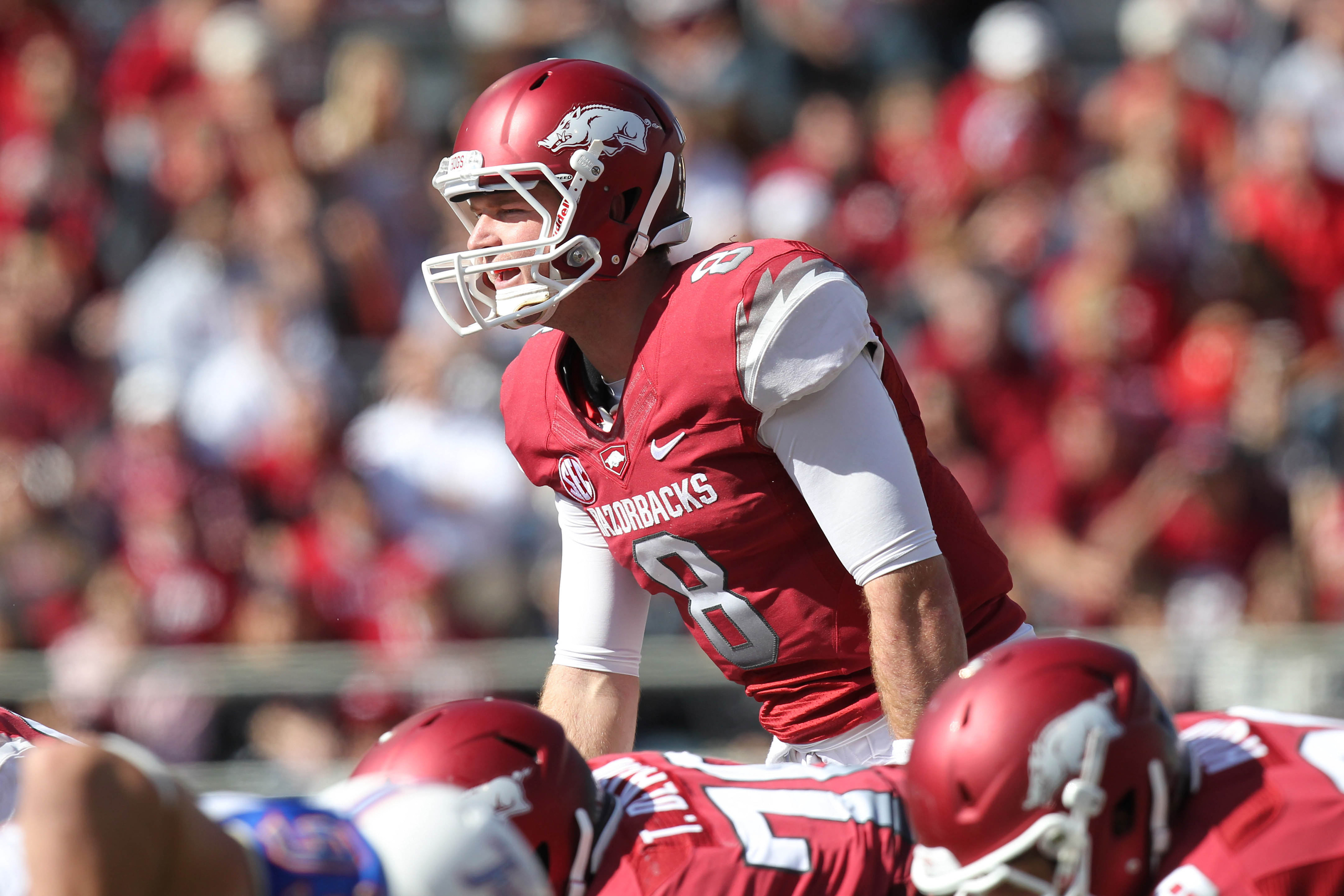 The final quarterback we're going to look at is Tyler Wilson of Arkansas, and is someone I think is flying under the radar. Wilson is a two-year starter at Arkansas, serving as Ryan Mallett's backup for the two seasons prior. Wilson thrived his junior season under Bobby Petrino but tailed off his senior after Petrino's firing and some injuries.

Wilson has the size that NFL teams look for at over 6'2" and 215 pounds. Wilson also has a more than good enough arm to make all the NFL throws, but he does have small hands which will cause some concern for teams. Smaller hands can often lead to fumble issues and some scouts think it's part of the reason that Wilson's deeper passes can wind up stalling and fluttering.

In the pocket Wilson shows the ability to step up in the pocket when feeling pressure and deliver throws. Wilson also doesn't seem to panic under pressure and can still deliver an accurate pass. WIlson can also move around a bit if needed, but he's not really a "runner" at the quarterback position. Wilson's biggest strength however is his ability to hit the anticipation throws, which is something a lot of the other quarterbacks in this class seem to struggle with.

Wilson's throwing motion is a little bit longer than you would like to see, but it's not really long enough to be big negative going forward. As mentioned before, Wilson's deeper passes can tend to flutter and stall out which a lot of people relate to his smaller hands, but it's possible he could change his grip on the ball to account for it, but that's something that will need to be worked out later.

Wilson also trusts his arm a bit much and will force some passes into coverage which means he will make some boneheaded turnovers at times. Wilson is going to need a positional coach and offensive coordinator that can reel him in and know when to let him take his shots, because he'll take them.

There is also the concern of Wilson regressing from his excellent junior season, putting up a big red flag. There are easy excuses to make with Wilson, such as the mess the Arkansas program was in and dealing with concussions, but it's still worth noting his production as a whole declined after Petrino left the program.

Against LSU, Wilson started out hot hitting on his first six passes of the game and driving Arkansas down the field before a fumble by the running back killed the drive. Then on the very next offensive possession Wilson rolls to his right and tries to go downfield, but the ball dies and winds up under thrown and picked off by LSU.

Arkansas used a lot of shallow crossing patterns to get the ball in their play maker's hands and allow them to work yards after the catch, and Wilson put the ball where the receivers could do just that. As the game went on he took some more shots down the field, but was off on most of them with quite a few being under thrown. He did have one really nice touchdown pass down the field, but he mostly stuck to the intermediate area while under LSU's blitzing and pass rush. He did a nice job moving around and stepping up in the pocket against LSU, as well as taking off and picking up yards with his feet when it was necessarily.

Wilson's box score numbers against South Carolina make it look like he had a so-so to poor showing, but he actually played fairly well considering the circumstances. Against the Gamecocks Wilson was under duress much of the game, a big thanks to Jadeveon Clowney, but stayed calm under pressure and was willing to take shots to complete passes over the middle and down the field.

Wilson challenged down the field only a few times in the game, but much of that was due to the pass rush that South Carolina brought and Arkansas tried to slow it down with quicker passes. Wilson did challenge down the field a couple of times, hitting a back shoulder throw on one and getting picked off deep on an over throw late in the game.

Wilson's toughness in the pocket and quick decision making is what stuck out the most to me in this game. He gets hit, a lot, and still comes out firing and is willing to take the shots to complete passes. He also showed some solid mobility and pocket movement under pressure.

The bottom line on Wilson is that he's a smart quarterback who can manipulate safeties and knows how to pick up first downs to keep his offense moving down the field. He shows good mobility in and out of the pocket, as well as throwing on the run. The biggest killer on Wilson is his down field throwing, which isn't necessarily bad, it's just not consistent. His velocity down the field tends to die out, but it's tough to determine if this is something mechanical or if it's something with his smaller hands not getting a good grip on the ball when trying to put some mustard on it. A lot of people have Wilson as their top quarterback in the draft, and it's easy to see why. He's someone I think could end up in the first round of the draft and absolutely should be someone the Jaguars consider at pick 33 if he's there.