Share All sharing options for: NFL Draft 2013: Will the Chiefs draft Dion Jordan?

The popular pick for the Jacksonville Jaguars appears to be Oregon pass rusher Dion Jordan with the second overall pick in the draft. It makes perfect sense, as the Jaguars are moving to a hybrid front defensively under head coach Gus Bradley and Jordan is someone he can use all over the field and to rush the passer, similarly to how the Seahawks used Bruce Irvin last season.

There is something that can throw a wrench in those plans however if Jordan is their guy; there is some belief that the Kansas City Chiefs might be eyeing Jordan with the No. 1 overall pick.

Why would they take Jordan? 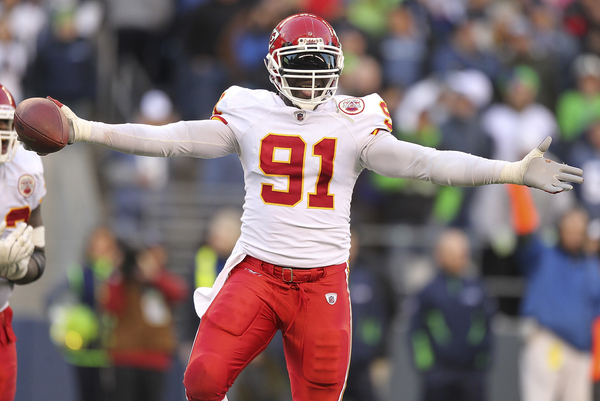 "By no means do I think the Chiefs should trade or cut Tamba Hali right now. Fact is the Chiefs have no depth at that position behind Houston and Hali and they need to address it at some point during this draft. If Hali continues to decline next season, which given his age you should expect to happen, the Chiefs would be wise to plan for the future before their hand is forced."
-Arrowhead Pride

Personally, I'm not sure that the Chiefs make the move for Jordan, but what if they do?

The reason the Chiefs could be looking for another pass rusher, despite having two excellent outside linebackers in Justin Houston and Tamba Hali, is the fact that they have no depth behind them and Hali is expensive the next two seasons. Hali's base salary is right under $7 million for the next two years, but each of those two years he has a $2 million bonus the team has to pay, and he will turn 30 this season.

It wouldn't be all that shocking to see the Chiefs go for a young guy at the position they can work into the rotation, because after all you can never have too many pass rushers, even when you have two good ones.

But, where does that leave the Jaguars?

The Jaguars say they have two players they are comfortable with draft at the No. 2 spot, but how true is that really? Who would be the second player they'd be alright with, given we all assume Jordan is one of them?

I would have to think if Jordan is gone by the time the Jaguars are on the clock at second overall, the pick would likely be between either Ezekial Ansah or Barkevious Mingo, both who would seem to fit in somewhere on the Jaguars new defense. It's possible the team could draft one of the top defensive tackles there as well, but they've signed two guys at that position in free agency and it's possible to get someone to fill the role Bradley uses with defensive tackles later in the draft.