In a stunning turn of events, the Jaguars have announced that the team shall move to the Spring Break Headquarters of Panama City.

Today is truly a terrible day in Jacksonville Jaguars history. In an early morning statement, the team announced that it will move to Panama City, leaving behind Jacksonville and a devastated fan base. We as Jaguars fans have been duped. We've been had. We were asked to go All In, and now the team has gone All Out of Jacksonville.

Citing poor ticket sales and numerous blackouts over the past few seasons, the statement points to the burgeoning tourist destination of Panama City as the premier location for relocation, beating out such notable tourist attractions like Branson, Missouri (Home of the Yakov Smirnoff Theatre), Dollywood, and Myrtle Beach. The Riviera of Florida, Panama City is the host to internationally-known events like MTV Spring Break and VH1 Spring Break and BET Spring Break. The so-called Spring Break Capital of the world also features Tocumen International Airport, the largest and busiest airport in Central America, with flights to International destinations, something Jacksonville is woefully short of.

Another reason why the Jaguars have moved to Panama City is it's close proximity to the football factory known as Alabama. Not the state mind you, but the illustrious powerhouse of the SEC. Shad Khan pointed to Nick Saban as the potentate of the college football world and may woo him to the Panama City Jaguars once the Gus Bus loses a tire and flips over and catches aflame.

Also of note are rumblings from the Tebow camp. It seems that Tim Tebow may finally get the chance to play for the Jaguars, but not in Jacksonville. Noted journalist and known Tebow confidant Sam Kouvaris has been seen on the phone with the Tebow camp and has been heard to say that a statement from the Tebow will be coming shortly. 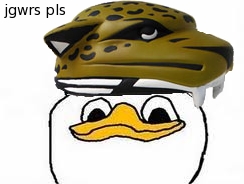