The Jaguars have many needs to address, and likely don't have enough to picks to fill them all.

With new general manager Dave Caldwell at the helm, the first move in the offseason for the Jaguars was to make not very many moves. Caldwell cut ties with Aaron Ross, Dawan Landry and Guy Whimper, but didn't do much to replace them or other spots with free agents.

Instead he allowed many players, including Derek Cox, Terrance Knighton and Greg Jones, to walk in free agency and kept his own free agent acquisitions pretty cheap.

Just days remain until the 2013 NFL Draft and it's pretty clear that Caldwell intends to build the Jaguars exactly the way he told everyone he did: through the Draft. But he may not have enough draft picks to fill the many needs on the team.

Why Dee Milliner to the Jaguars is unlikely 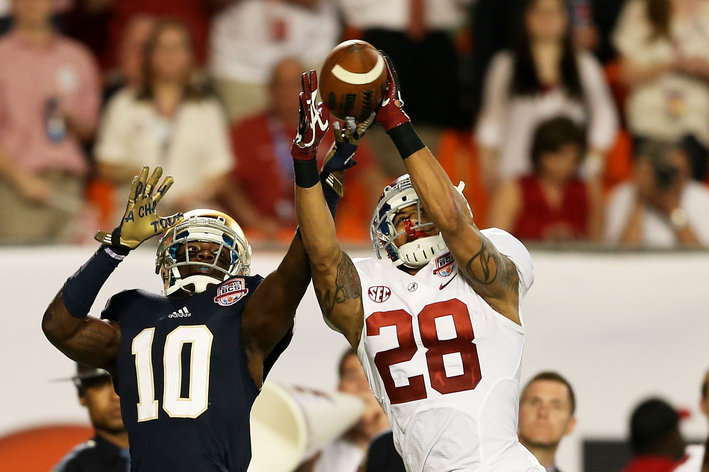 If selected at 2nd overall, Dee Milliner would be the first cornerback to go in the top four picks since Charles Woodson was selected at 4th overall by the Oakland Raiders in 1998.

The top three cornerbacks on the depth chart for the Jaguars in 2012 were Derek Cox, Rashean Mathis and Aaron Ross. All three are gone from the team now, and it's clear that the Jaguars will look very different at the position.

If the season were to begin tomorrow, it's tough to say for sure who would be the starters, but my best guess is that Alan Ball and Kevin Rutland were earn the spots. I don't think that's quite as terrible a duo as it appears to be, but I'd be surprised if the Jaguars didn't find at least one new starter to input instead.

During his time with the Seattle Seahawks, Gus Bradley's defense became well known for its large cornerbacks, as Richard Sherman (6-3, 195) and Brandon Browner (6-4, 221) were easily the largest pairing in the NFL. Beyond the acquisition of tall cornerbacks, the Seahawks also targeted lengthy ones as Walter Thurmond (5-11, 189) was drafted by the team in 2010, likely due to his 32.75-inch arms.

The Jaguars already began the trend of lengthy cornerbacks by acquiring Ball (6-2, 191), but they will likely look to add more lengthy corners with press capabilities at the end of the week.

The rule of thumb is that a need at quarterback is automatically the biggest need for a team due to its importance on the field. I subscribe to this school of thought, although I placed cornerback as a bigger need due to the team's lack of depth on the roster.

In the two seasons since Blaine Gabbert was selected with the tenth overall pick in the 2011 NFL Draft, things haven't gone well for the Jaguars or Gabbert. He's been very bad, to put it plainly. It certainly isn't all his fault, as things have crumbled around him, resulting in the firing of Gene Smith, Jack Del Rio and Mike Mularkey, but he definitely hasn't proven that he can be a franchise quarterback.

The possibility still exists that he could tap into his huge potential, but with a new regime in Jacksonville, it wouldn't be surprising to see the team ditch that hope and move on with a new player.

It is undoubtedly a need for the team to add competition at the position and the Jaguars have made it clear that they will add another player to the mix through the Draft. Almost every top quarterback prospect has had extensive contact with the Jaguars and they could be a team in play for the first quarterback off the board, who most expect to be West Virginia's Geno Smith.

The Jaguars have one, but need another. It's as simple as that.

Eugene Monroe, the team's first-round pick in the 2009 NFL Draft, has quietly developed into one of the NFL's best left tackles. If he's not a top five player at the position, he's certainly in the top 10 and will likely earn a contract after the season that reflects that.

However, opposite him on the Jaguars offensive line is a black hole of sorts that featured Guy Whimper and Cameron Bradfield consistently beat on a week-to-week basis. Whimper was released shortly after Caldwell took the reigns, but a replacement at right tackle has not yet been added.

Many believe that the Jaguars could address the need with the second overall selection, as either Eric Fisher or Luke Joeckel will be available, but there are dangers that come with selecting them that early, as it could jeopardize attempts to ensure that Monroe stays with the team for the long-term.

However it is a position that will need to be addressed, and if it isn't done so in the Draft, there are still a few free agents (Andre Smith, Eric Winston, Tyson Clabo) that would likely earn a call from the Jaguars immediately after the Draft is over.

Who fits, who doesn't? 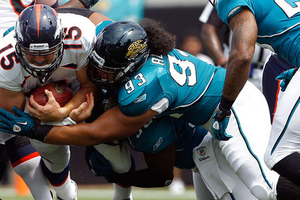 In Gus Bradley's scheme, the traditional 4-3 is instead replaced with one that incorporates 3-4 elements. With that in mind, which players on roster fit that scheme and which ones may see their days numbered?

Once a strength of the Jaguars, the defensive line has become a weakness and the team hasn't been able to draft well enough to fill the holes. Derrick Harvey, Quentin Groves and Tyson Alualu were all selected with the idea that the pass rush would improve with their presence, but for the second time in four seasons, the Jaguars finished last in the NFL in sacks.

With Gus Bradley's scheme, featuring LEO and 5-tech defensive ends, acquiring new players to fill the defensive line will look a little different than the average 4-3 building process and that means that some of the players on roster might not be the best fit.

While Jason Babin looks like the player most likely to fill the LEO role for the Jaguars in 2013, he's 32 and it's also a position that requires more than one player to fill. Andre Branch, a second-round pick in 2012, might be able to help some, but that's hopeful considering he was a complete non-factor in his rookie season.

In Seattle, the only starting player on the defensive line that weighed less than 300 pounds was the LEO, as each of the others were large space-eaters, including two players that tipped the scales at over 320. The Jaguars began the process of adding size by signing Roy Miller (6-2, 310), but don't have a whole lot of size to work with beyond him and 2012 seventh-round pick, Jeris Pendleton.

After departing with Dawan Landry, the Jaguars have a pretty sizable hole at strong safety. While Dwight Lowery is expected to handle the free safety duties after two strong seasons with the Jaguars, the only other safeties on roster are Chris Prosinski, Chris Banjo and Antwon Blake, none of which inspire much hope, or even fit at the strong safety position.

In Seattle, Bradley relied on huge strong safety Kam Chancellor (6-3, 232) to play very shallow in the secondary at times, almost as if he was a fourth linebacker, while Earl Thomas played in more of a center-field role. While Lowery is a player that could adequately fill the center-field role, the Jaguars don't have any player with the size or physical capabilities to play shallow that Chancellor possesses.

They might be able to find that type of player in the Draft though, as Richmond's Cooper Taylor (6-5, 228) and USC's T.J. McDonald (6-3, 219) are both expected by most to be available in the third day of the Draft.