Check out the live blog for Day 3 by clicking here.

For the second round, the Jaguars appear to be hard selling the No. 33 pick, the first pick of the day and it should be quite valuable with who all is available.

6:51 PM: Jaguars general manager David Caldwell said he was very impressed with Cyprien in the interview, noting he was a four year starter who was a late bloomer. Caldwell also said the team didn't get many calls for the pick, three teams were interested.

6:17 PM: Per multiple reports, the trade market for the No. 33 overall pick has gone cold and the Jaguars are planning to use their pick. It appears it will be either Johnathan Cyprien or Johnthan Banks, either of which will upgrade the Jaguars defense.

3:05 PM: Adam Stites took a look at what the Jaguars' remaining draft needs are after selecting an offensive tackle in the first round. Spoiler alert: They need to fix the defense.

2:16 PM: Johnthan Banks might not be the only candidate for the Jaguars at No. 33, if they don't end up trading the pick, as Ian Rapoport of NFL Network says Syracuse quarterback Ryan Nassib would be in play. That would be surprising, after earlier reports said otherwise, but considering the team's play at the position in the last two seasons, not irrational.

1:56 PM: On the topic of finding trade partners interested in moving up to take Geno Smith, Lance Zierlein of the Houston Chronicle reported on Thursday night that the Raiders had D.J. Hayden as their target, but discussed selecting Smith with the No. 12-overall selection before officially deciding to go with Hayden. They are the owners of the No. 42 selection.

1:51 PM: The New York Jets could be a possible trade partner for the Jaguars, as ESPN's Adam Schefter reports they are looking to move up and take a quarterback in the early second round. The Jets are the owners of the No. 39 pick and reportedly considered selecting West Virginia's Geno Smith with the No. 13-overall selection on Thursday.

12:50 PM: Luke Joeckel is about to hold his introductory press conference down at EverBank Field. You can watch it live on Jaguars.com.

11:54 AM: The Jaguars still hold the 33rd overall pick and according to Gil Brandt of NFL Network, they're leaning towards drafting MSU cornerback Johnthan Banks.

9:51 AM: There's nothing really going on right now, so I'm about to go eat pancakes but we can get an idea for what kind of contract Luke Joeckel will be getting. Per OverTheCap.com, the second overall pick should get a contract valued at around $21 million with a $13.8 million signing bonus. The cap hits through 2016 are more than manageable, which should allow the Jaguars better leeway to pay Eugene Monroe next year.

9:34 AM: Adam Stites has given us his best available players remaining in the second round, which shows the Jaguars should have a handful of good players to choose from if they're stuck at pick No. 33. A little birdie told me they could be looking at a safety from a school who has a beach scene as it's basketball court, though. 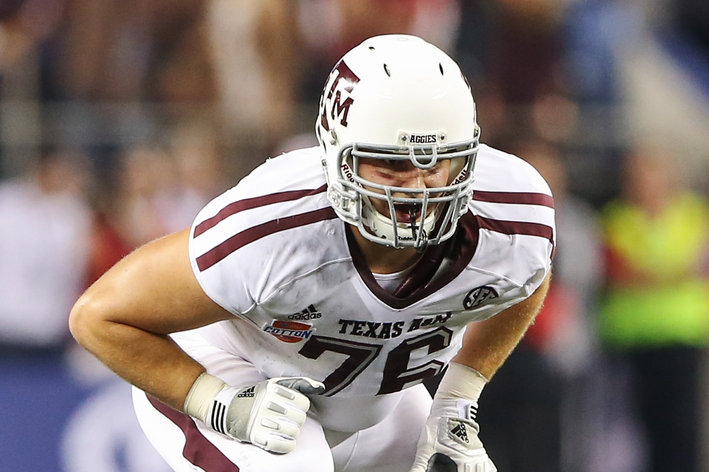 The Jaguars selection the Outland Trophy winner with their first pick to shore up the right tackle position.

8:31 AM: Don't forget to vote in the Luke Joeckel approval poll and I have my write-up and grade for the pick. Still kind of coming to terms with picking a right tackle second overall, but Caldwell and Co. picked the top guy on their board, so I can't fault them for that.

7:00 AM: The Jaguars should be fielding calls hot and heavy today for the 33rd overall pick, especially with names like Johnathan Cyprien, Arthur Brown, Tank Carradine, and Geno Smith still on the board.

• Best players available in Round 2