What does Denard Robinson need to do to transform into an NFL running back?

The Jacksonville Jaguars made a surprising pick in the fifth-round of the 2013 NFL Draft, adding former Michigan quarterback Denard Robinson to their roster. Robinson decided prior to the draft process that he was going to do whatever it took to get to the NFL, even if he had to abandon playing the position he played through much of his career.

Robinson played in the 2013 Senior Bowl, agreeing to move from the quarterback position to wide receiver, where many felt his play making ability and speed would be put to good use. Robinson had a rough week, trying to make the quick adjustment to a brand new position and still dealing with a nerve issue in his arm, but his willingness to do what he could just to get on the field I'm sure left a good impression on some NFL teams, including the Jaguars.

The Jaguars didn't view Robinson as a wide receiver though, as he was announced as a running back at Radio City Music Hall when the pick was announced during the 2013 NFL Draft.

Running back may be the best use of his skill-set as well, especially with the Jaguars moving towards a more zone blocking scheme on the offensive line.

Robinson needs to do a lot of things however to fully make the transition to the position, despite his elite rushing ability at the college level. Running as a quarterback is a lot different than as a running back. 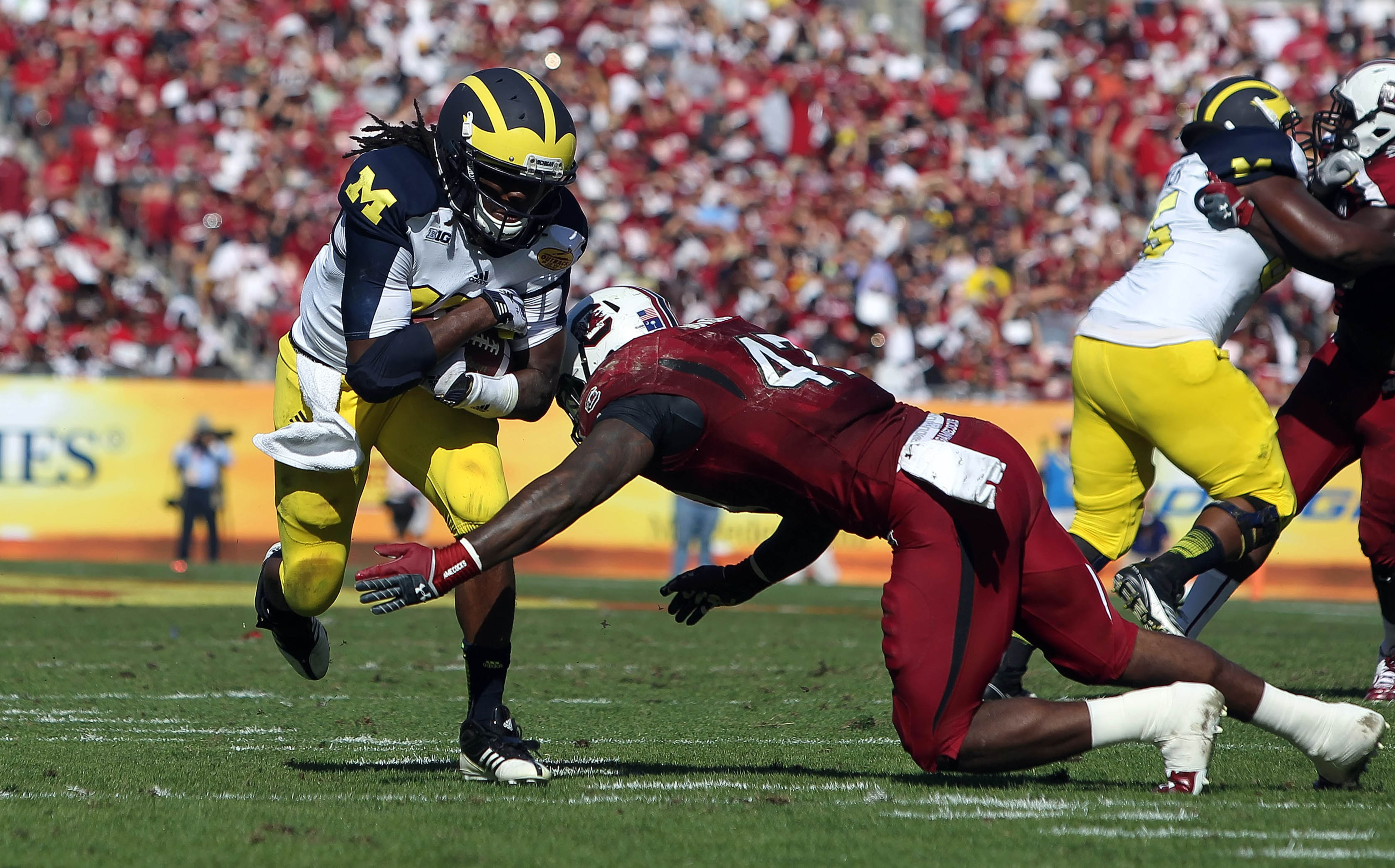 The biggest misconception for Robinson initially however is that he's small, which is both correct and incorrect. Robinson is fine, weight-wise for the position at 200 pounds and standing 5'11". The issue is how Robinson's "bulk" is distributed, which played into him being dinged up for some of his college career at Michigan, absorbing so many tackles. Robinson has a thicker lower body, which gives him a good leg drive and he can move the pile and break tackles, but the issue is his upper body lacks bulk, but that's for a reason.

Robinson played the quarterback position for much of his early football life, including nearly his entire college career at Michigan. Generally, quarterbacks do not want to be bulky in their upper body but ideally would be flexible, as it aids in throwing mechanics, etc. If you're too bulky up top, it can have an adverse effect on how you throw the football.

"You watch that guy practice and he has fun. Not only does he have juice on the field in terms of his speed and play-making ability but just juice in the building. You’re going to love the kid." -Dave Caldwell

Robinson wasn't the best passer at Michigan, but as a quarterback he's naturally not going to be bulky in his upper body. As Robinson transitions to the NFL however, that's likely going to be something the Jaguars focus on for Robinson as it will help his overall game as a back, including making him a bit more durable and allowing him to continue to break tackles, given he can correct some of his pad level running with the football, another quarterback habit.

When watching Robinson run the football at Michigan, he does display a few traits that NFL teams look for in players who rush with the football. For instance, Robinson is a patient runner often setting up blockers to give him running lanes to go through. A lot of backs and quarterbacks, especially speed guys, try to turn everything up field and just blow past everyone. The key to being a successful rusher in the NFL is understanding your running lanes and being patient, letting your blockers set everything up, which is one thing Robinson already does very well.

After Robinson dealt with a nerve issue in his throwing arm, missing two games his senior year, he got back on the field as a running back with Michigan. Robinson rushed for over 100 yards against South Carolina in the Wolverines bowl game, in part because he's already a patient runner.

A lot of runners at the college level would have tried to use their speed and shoot for what looks like a big running lane to the left, but Robinson possess good vision and can tell it's going to close up and instead lets his blockers setup in front of him and splits the defenders picking up more yardage on the play. This is from Denard lining up in the backfield at running back as well, so he doesn't just have the benefit of all the extra blockers like he does at quarterback.

As mentioned previously with the concern about Robinson's size as a runner, he does run tough and breaks tackles. He's not afraid to lower his shoulder and absorb a shot to pick up more yardage.

Even though this play is essentially a "student body right", Robinson still picks up his running lanes and doesn't out run his blocking, getting small and shooting through his blockers to take on the defensive back waiting for him. Robinson covers up the football and gets low, putting the defender on his heels and picking up more yardage because he delivered the blow and nearly broke the tackle.

The other big thing going for Robinson, which will likely allow him to get on the field and involved early is just his raw ability to change direction and accelerate. Robinson ran a 4.43 40-yard dash at the NFL Combine and every bit of that speed shows up on the film, especially his change of direction ability. Just watch Robinson's cuts in this clip from his final bowl game.

This is a sweep play, which is probably something we'll see the Jaguars do with Denard Robinson early, that South Carolina appears to have read and stopped. The end, Jadeveon Clowney (No. 7), recognizes the play and takes away the outside, forcing the play back inside to the linebacker and safety coming up to help which should end it for a minimal gain, but Robinson cuts and accelerates across the grain of the play to turn a 1-yard gain into a 12-yard gain. Plays like this just highlight why the Jaguars and many teams wanted Robinson as a play maker on the offensive side of the ball, including on kick returns.

Denard Robinson still has a lot to work on at the NFL level before he can be considered an "every down" type player. The biggest issue he's going to have going forward is pass protection, which is of dire importance for a running back in the NFL. We have no idea if Robinson can do it, because he's never been asked to, but getting stronger and bulking up in his upper body should at least assist in this.

"He’s going to have his drops, he may have his fumbles, and that stuff but it’s going to be a little bit of a work in progress. We feel like if we can develop him then he can turn into something special." -David Caldwell

As mentioned before, he'll need to bulk up his upper body and practice proper technique taking hand offs. Robinson is accustomed to just tucking the football and running, rather than taking a hand off, securing the football, and then rushing.

Another big area Robinson will need to improve, and a lot of it is just comfort level, is to keep moving when he's catching the football. Robinson can be dangerous in space, so the Jaguars are going to want to include him in the passing game on screens and dump off passes, but he needs to get comfortable with not just route running, but with catching the football naturally on the move. Robinson had a bit of a habit at the Senior Bowl to almost stop when he was trying to catch the ball, but at the time this was all new to him. It's something that can definitely improve over time, however.

As a rookie however, Robinson should be able to get in the lineup returning kick offs and as a package player on offense, even if he's not touching the football. Simply running a decoy play like the sweep play above can keep defenses on their toes because Robinson was such a big play threat at the college level.

• Jaguars add "juice" to the roster