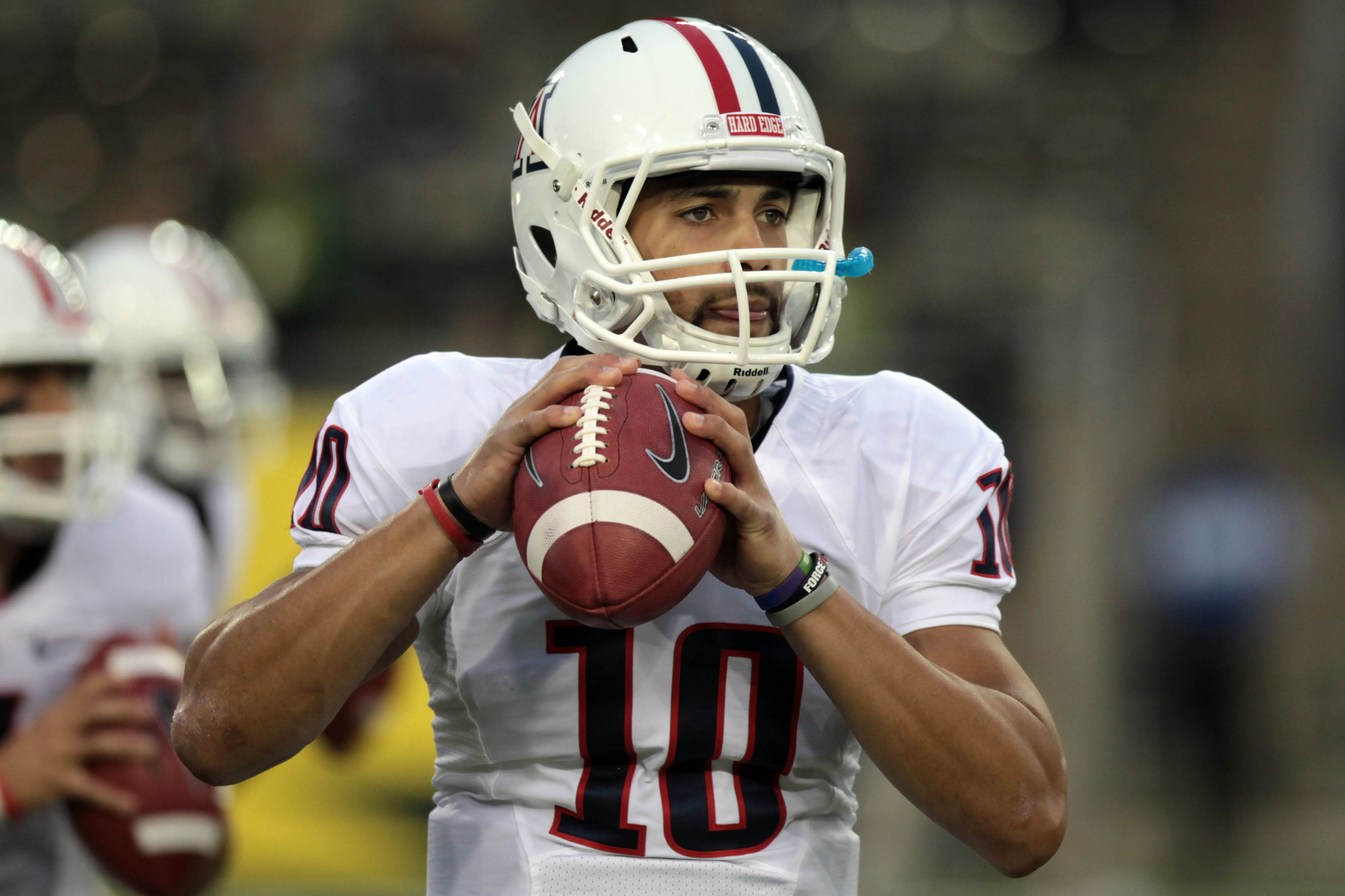 The next player we're going to look at is Arizona's Matt Scott, who's an interesting prospect given what some of the NFL is doing right now on offense. Scott ran a lot of read-option with the Wildcats under Rich Rodriguez and he has the tools most teams look for in a quarterback. He has solid size at 6'2 and 221 pounds, bulking up from 213 pounds at the NFL Combine, and has a strong arm. He's also an athletic quarterback with nice running ability and can pick up chunks of yards with his legs.

Scott will also step up in the pocket to avoid rushers and stare down the barrel to take the hit to deliver the football. He's also adept at throwing on the run with a quick and compact release.

The big problem with Scott however, and something teams will have to vett, is he's only done it for a single season and is kind of a big unknown, as far as reading defenses. He was not asked to do it and at the East-West Shrine Game it was tough to really get a feel for how well he did it. Scott also really struggled under center at the All-Star game, fumbling a handful of snaps.

Scott's problems don't end at reading the field however, as his footwork really needs to be cleaned up and he needs to learn to step into his throws. When he misses, especially down the field, it seems to be from over throwing the ball. Scott also displays a lot of confidence in the velocity he puts on the ball, which is a double edge sword. It allows him to hit windows a lot of quarterbacks can't, but he'll also force passes into situations he shouldn't.

When Scott's primary read is taken away, he has a short moment of confusion and panic, which often results in him bailing on the pocket or simply dumping the ball off.

Against Stanford it was difficult to really get a gauge for how Scott saw the field and went through his reads, because it didn't appear that he really had any. The vast majority of Scott's throws were either behind the line of scrimmage on sort of wide receiver screens or they were quick slants.

Scott's completions, especially in the 0-4 yard range, were bloated with immediate quick throws to the sideline. Scott only attempted four passes beyond 15 yards in the game and completed half of them, but one of them required the receiver to wait on the ball and make a contested catch.

The biggest positive for Scott against Stanford however was his toughness in the pocket. He was drilled repeatedly but still hung in there and got the football out, willing to take the hit to make the play. At times, especially when it appeared Scott's first read wasn't there, he would hold the ball and kind of panic as to what to do and hesitate whether to run or throw to the opposite side of the field. This would tend to lean towards questions about his ability to make reads, but as mentioned he was never really asked to in Rich Rodriquez's system.

Against USC Scott attempted to throw the ball down the field more than he typically did, with mixed results. Even the deep throws for Scott seemed to be pre-determined throws before the snap. The majority of the passes that fell incomplete down the field for Scott seemed to be overthrown and if there was coverage on the receiver he struggled to place it in a favorable position for the receiver, meaning it was often a contested catch.

Scott ran more against USC, effectively, but he doesn't really protect himself well when he runs. Scott bails at the last minute, often absorbing a blow and at times taking some shots to the head trying to pick up some yards. Scott also showed against USC he's more of a straight-line runner than an agile runner, as he struggled with changing directions and was often caught by defenders when he needed to do so.

I don't think it was much of a coincidence that the game Scott was given more freedom, so to speak, to do more than just quick screens and slants his efficiency score took a nosedive. He's pretty scattershot down the field when he actually sits and throws from the pocket. No matter how much read-option or pistol is run in the NFL, it still comes down to being an effective passer from the pocket and at this point, Scott isn't.

At the end of the day Matt Scott is likely going to get drafted much higher than he would be in normal seasons because of how well things like the pistol formation and read-option worked last season in the NFL. In reality I wouldn't be comfortable taking Scott anywhere before the fifth round, but he'll likely wind up getting over drafted somewhere in the third round by a team hoping to capitalize on the new-look offenses. Scott needs a lot of refining and work however, and the fact that he hasn't really shown at all the ability to make reads and look off defenders would make me hesitant to take a flyer on him early.