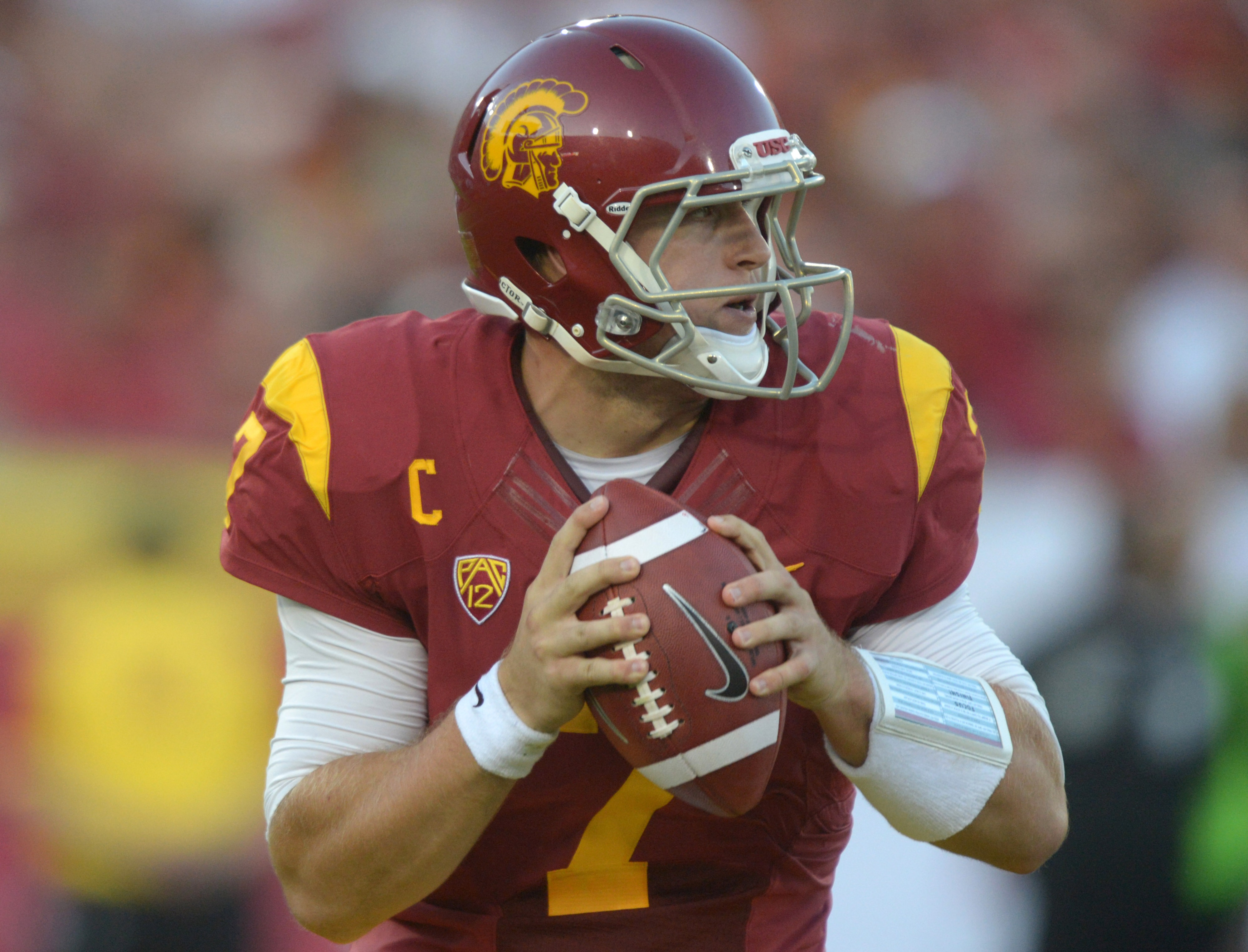 The next player we're going to look at is Southern California's Matt Barkley. Opinions of Barkley range all across the board in the 2013 NFL Draft. Some people grade him as the best quarterback in the draft and a Top 10 type pick, while others don't even have him ranked in their Top 5 for quarterbacks in their position rankings.

Barkley is the classic drop back NFL style passer, but is a little shorter than most teams would like. While Barkley clocks in at 6'2, he's not really all that adept at moving his launch point and manipulating his throwing lanes, which is how guys like Donovan McNabb, etc. were successful despite lacking the ideal height. Lack of mobility is one of Barkley's biggest knocks that often gets ignored. It's not the the kind of mobility where the quarterback runs to pick up yards, because Barkley certainly won't do that, but he just doesn't seem to slide in the pocket all that well and becomes spotty under pressure.

The most commonly talked about negative on Barkley is his arm strength, especially throwing outside the hashmarks, but it's not going to be what sinks him at the next level is he's unsuccessful. Barkley's arm is adequate to be a competitive NFL quarterback, but it will limit what he's able to do at the next level, similar to how Andy Dalton's becomes limited in the playoffs when teams force him to throw the ball downfield, outside the hash marks. Barkley's passes seem to lack velocity down the field, especially when he throws to the long side of the field even on the intermediate routes.

The biggest bonus for Barkley is he's used to running pro-set formations and making calls at the line of scrimmage, which will help him acclimate to an NFL offense quicker than most rookies. He has a compact release and gets rid of the football quickly with a typical throwing motion, but he seems to require a lot of room to be able to step into his throw and be accurate.

He doesn't do it near often enough, but Barkley will execute pump fakes and look off coverage and call hot routes with his receivers based off pre-snap reads. Typically Barkley's decision making is adequate, but he often forces the football to his best receiver, which isn't necessarily bad, unless the receiver is taken away and then he will often simply just check it down.

Barkley's game against Stanford wasn't as bad as his efficiency rating would indicate here, but he certainly wasn't good. The biggest issue for Barkley was he was under duress a lot of the game and that naturally has an effect on his play. As mentioned before, Barkley isn't all that adept at changing his launch point under pressure, so when he has to move and it's not part of the play, he gets erratic. When the play calls to move the pocket and Barkley knows he's going to have to setup his throw on the move he's fine, it's when he was the improvise he has the issues.

Quite a few of Barkley's passes against Stanford were either quick immediate throws to his receivers or slants and comebacks within 10 yards of the line of scrimmage. That's not a surprise though, given how much pressure Stanford brought each down and it was more a reaction to slowing the rush than anything else.

Barkley did challenge downfield a few times, but more often than not it seemed like he was just heaving it up for Marquise Lee and letting him make the play rather than an accurate throw. Barkley really struggled throwing to his right beyond five yards on the day, which often wound up being the wide side of the field. He was picked off on a throw that just didn't have the velocity it needed.

Barkley's stat line and efficiency rating is a bit misleading in the Syracuse game, as he didn't nearly play as well as it would lead you to believe. A game like this makes me think about revising the forumla I'm using because this is a type of game that will exploit it. Barkley completed 23 passes on the day, but 15 of those passes were less than 5 yards. I might count passes sub-5 yards as a half point rather than the full point, but I'll leave that for next year.

It was really tough to get a feel for Barkley in the Syracuse game, but I was wanting to compare how charting it looked against the box score. Barkley was adequate in the game, but he really didn't need to do much because he let his receivers do all the work. His few throws over five yards were mostly just quick slants or comebacks and the deep passes he attempted were off the mark.

You can see a stark contrast in the efficiency rating of the two games with Barkley, but one he was asked to push the ball down field more while the other was predominantly just quick passing and slants.

Overall Barkley's ceiling is likely going to be a mid-level NFL starter, like Andy Dalton, but Barkley doesn't move around and change his launch point as well as Dalton does. A team is going to have to develop a specific offense around Barkley for him to be successful, revolving around three and five step drops in a rhythm passing game. I have Barkley as a third round pick and a primary back up, mid-range starter in the NFL, but it's likely he's going to get pushed up the board because of how the NFL values quarterbacks.