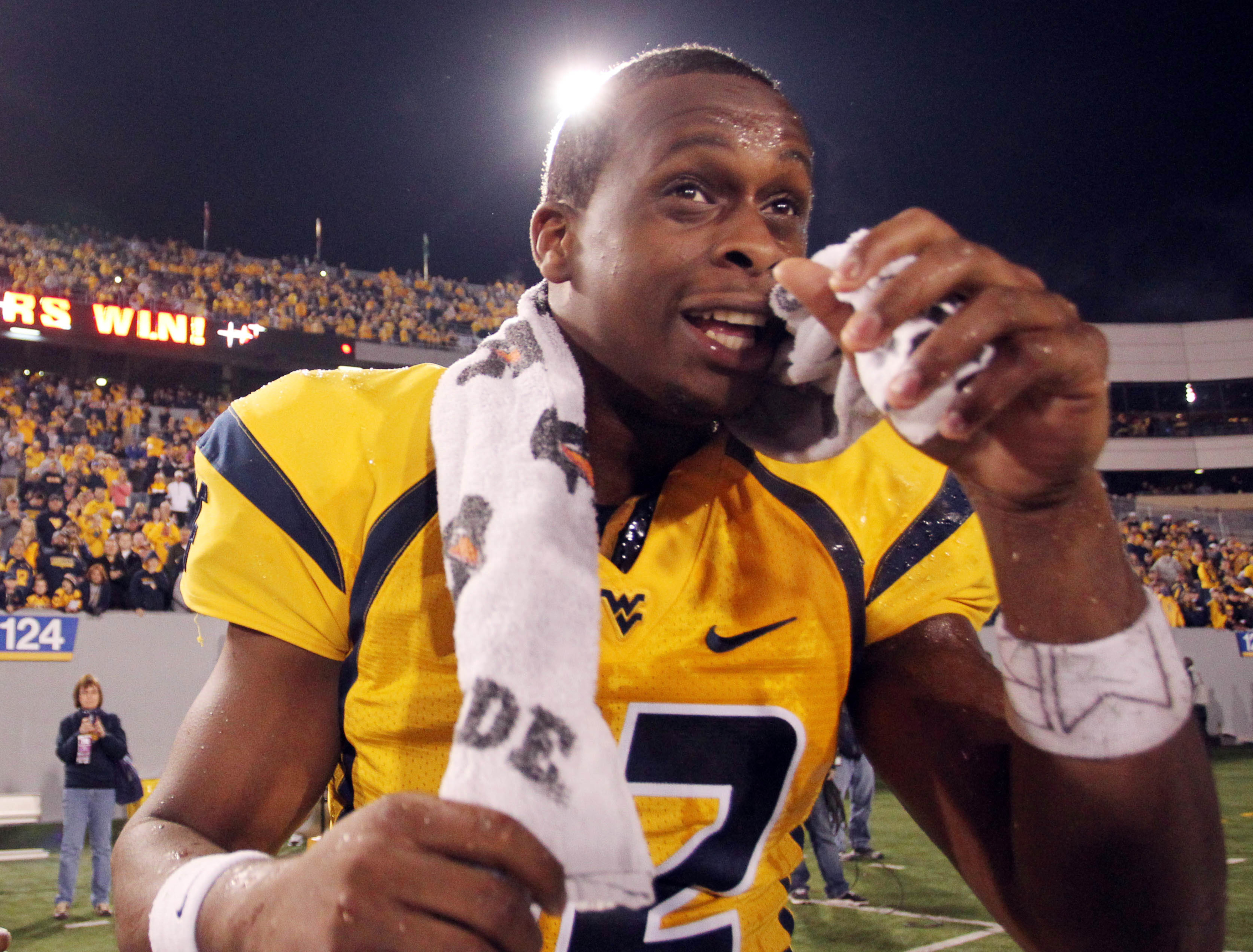 The next player we're going to look at is likely going to be the first quarterback off the board and someone many feel will be a lock as a Top 10 pick in West Virginia's Geno Smith.

Smith has the things that NFL teams look for in their quarterbacks. He's just a shade under 6'3, he's around 220 pounds, he has more than enough arm strength, he has lots of starting experience, and he can make plays with his feet if necessary.

Smith doesn't have a rocket arm, but he can make all the throws on the field and when he drives his throws he shows the velocity teams want on the longer out routes to the far side of the field. Smith's biggest attribute in my opinion is his ability to place the football in a spot where his receivers can pick up yards after the catch. While a good portion of the WVU offense were screens and quick throws, Smith would set up the receiver or back in a way to make it easy to run with the ball once it was caught. He also displays nice touch on his passes, especially down the field.

Another aspect of Smith that's a double-edge sword is that he will take shots down the football field. He does a nice job in the intermediate range and can throw a beautiful deep ball at times, but can be a bit inconsistent in that area, but some of that has to do with his footwork and driving his throws. He will get greedy however, especially when his team is down, and tend to go for the big play rather than taking the lesser route that is available.

Smith also keeps his eyes down field when under duress in the pocket and does an adequate job of sliding to avoid the rush and running when necessary. He can drift into the rush at times looking down the field, especially retreating backwards, but overall his pocket presence seems more than adequate at the next level and he doesn't appear to get rattled by being hit.

The biggest knock people seem to have on Smith is that he played in an "Air Raid" offense under Dana Holgorsen and it was all quick throws with minimal reads. But, as Smith detailed on Jon Gruden's QB Camp on ESPN, one play actually requires multiple reads on the defense because of the style and tempo that West Virginia ran. Smith drew up a standard play in the Mountaineers offense which in essence is a play that calls for the quarterback to walk up to the line and read the defense, then audible into the appropriate play from the formation.

Smith also needs to improve his blitz pickup on the pre-snap, as too often free defenders come in the backfield and he failed to make the protection adjustment. That can come along however with more film study and wasn't a "killer" deficiency in his game. He can also lock on to a receiver at times and decide where he's going before the snap, but it's hard to distinguish how much of that is Smith just not going through progressions and how much of it is design of Holgorsen's offense.

Smith will also need to get more consistent in making anticipation throws, being just a touch late on those types of throws more often than not. He will need to get better at throwing the ball just before the receiver is coming out of their break rather than just after. He's shown the ability to do it (See: Maryland 2012), but he needs to do it on a more consistent basis.

For the games I charted with Smith, I wanted to find games where he didn't have his typical gaudy stats and games in which it was against legitimate competition. I was hoping to find one of his games against Syracuse since he's 0-3 in his career against them, but I didn't want to chart the bowl game from 2012 because it was poor weather conditions and both he and Ryan Nassib played poorly because of it.

Texas Tech was what some considered the beginning of the end for Smith and the Mountaineers in the 2012 season. It was the first loss by the team and they were blown out, as the Red Raiders stifled Smith and the WVU attack. Smith's stat line for the game wasn't necessarily bad and he didn't really play poorly, but he didn't play smart.

Early on Smith seemed comfortable and took what was available, but as soon as West Virginia was down multiple touchdowns and the offense needed to pick it up, he began trying to force plays down the field. Smith would try to get the touchdown on one big play rather than pick up the chunks of yardage that were available, and it just exacerbated the problems on offense.

As you can see on the chart, Smith sprayed the football all over the field, but took quite a few shots deep. There were plays to be made on the deep passes, but he passed up easier throws that would have been good chunks of yardage trying to get the play. While you like to see the quarterback go for the big play, they also have to know that you can't score all those points in a handful of plays and catch up.

That was Smith's biggest failure against Texas Tech, more than anything else.

Smith's matchup with Oklahoma was another game he didn't have those gaudy numbers, but he put up good numbers because he was on with his deep ball and consistently beat Oklahoma down the field. He completed four passes over 25 yards, all of which were touch throws over the top of the defense.

Smith and West Virginia kind of have a stigma about their offense being predominantly screens and sweeps, and while that's true to an extent, a lot of the throws Smith made against both Oklahoma and Texas Tech were beyond the 5-yard mark and NFL-style route concepts. Smith ran the majority of his passing plays from the pistol formation, which includes play-action that turns your back against the defense.

Overall I have Smith as a first-round pick, but I'm not sure he's a Top 10 player in the draft overall. That's not to say Smith wouldn't be worth drafting in the Top 10, because he is because he's a quarterback. Quarterbacks are always going to be forced up the board because of the importance of the position. Smith has some mechanical flaws, especially in his footwork, that will need to be ironed out at the pro level, but he's the only quarterback in the draft I think can come in and start right out of the gate. He's been a successful and productive player out of a read-option offense, an Air Raid offense, and a hybrid of pistol and Air Raid concepts at the college level.

If a team thinks he can be a franchise quarterback at the next level, he's absolutely worth taking early in the 2013 NFL Draft.