Four interceptions and 321 tackles in his collegiate career weren't enough to earn Banjo a contract as a rookie, but a year of dedication away from the game has given the defensive back his first chance to show the NFL what he can do.

Share All sharing options for: Chris Banjo's 2nd chance at a 1st impression

The last weekend of April annually features hundreds of rookies added to NFL rosters with the daunting task of outplaying and replacing a veteran to earn a roster spot. For a majority of these players, it's their only chance at the NFL and if the opportunity slips through their fingers, it's often the end of the line for their time playing football.

Former-SMU Mustangs safety Chris Banjo never earned that opportunity in his rookie season though, as tryouts at rookie camps with both the Oakland Raiders and Pittsburgh Steelers ended with the four-year collegiate starter on the outside of the NFL, looking in.

"I understood, I knew what the chances were and I knew it was a long shot."

Banjo didn't receive his first NFL contract until a year later, when he signed with the Jacksonville Jaguars in April after impressing the team at veteran mini-camp. The contract gave Banjo his first spot on an NFL roster and came after a year of determination to beat the odds stacked against him after a year away from the game.

"I understood, I knew what the chances were and I knew it was a long shot," Banjo said in a phone interview on Friday. "Being in my situation when I was coming out and everything, I knew it would be harder."

With rosters loaded with rookies during the 2012 offseason, Banjo held out hope that he'd be able to fill in for a team due to an injury or other circumstance, but the phone never rang. By the end of the summer, it was necessary for Banjo to get a job so he could pay the bills, but that didn't stop him from continuing to try to chase his dream.

"My schedule was really weird," Banjo said. "I'd wake up at around 4:15 or 4:30 to go work out, I'd work out from about 5 until 7 and then I would go to work from about 8 until about 5:30, or 6 with traffic, and then I would go work out again. It would be late night, but I'd try to get on a field to do footwork or anything like that from 7 to 8. I'd just continue to work on my skills, in terms of my movement skills and my footwork." 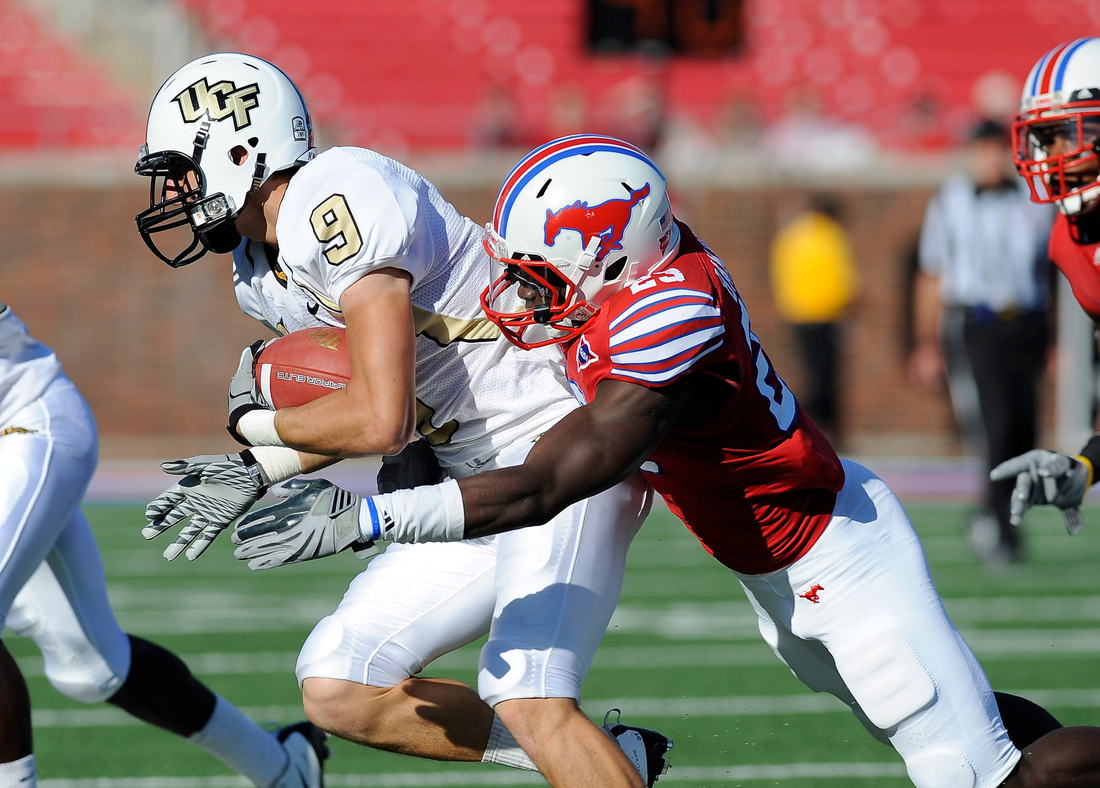 During the 2012 regular season, Banjo continued this grueling pace before taking a three-week break from football at the end of the year.

"I took three weeks off to re-charge myself, because I was really starting to doubt things at that time," Banjo said. "I never did lose faith in it, I never lost my hope, in terms of knowing what I'm capable of doing, but I did at times, start to doubt if this is really for me, but I was fortunate to have people around me that really encouraged me and helped me know this was something I could continue to fight for."

The fight paid off, as Banjo attended the 2013 SMU Pro Day and managed to cut his 40-yard dash time after being clocked at 4.5 in the year prior. "Multiple teams clocked me in the mid-4.3's, so that was beneficial for me, and I also did a regional combine in Houston that I performed well at, which allowed me to get invited to the Super Regional, where a lot of the scouts that were at my pro day were at that one as well. They were allowed to see me do well at that one as well."

"Regardless if they drafted seven safeties or they didn't draft any at all, I know I was going to have come every day and compete against myself."

Of the teams that took notice were the Jaguars, and they invited Banjo, along with 17 others to tryout for roster spots, at voluntary mini-camp in mid-April. At the conclusion of the three-day camp, Banjo and defensive end Pannel Egboh were the only two to earn spots. A week later, the Jaguars drafted Jonathan Cyprien, Josh Evans and three cornerbacks to rebuild the secondary, but that's not something that Banjo is worried about.

"Last year it probably would've freaked me out a little bit, but coming in this year after being out a whole year, I just really realized how it hard it was to get here, I just wouldn't expect it to get any easier," Banjo said. "The way I look at it, this is just another part I have to work hard for and something I have to compete at."

"What Coach [Gus] Bradley talks about all the time is 'constant competition,' so regardless if they drafted seven safeties or they didn't draft any at all, I know I was going to have come every day and compete against myself."

Now the challenge for Banjo has switched from chasing a contract to keeping a spot on an NFL roster as the Jaguars will have to cut the roster from 90 to 53 by the end of the summer. But for now, Banjo says he's taking it one day at a time and appreciating the journey that led him to the NFL. He also appreciates being part of a team that is in the midst of a re-birth of its own.

"I love it, I genuinely love it," Banjo said of Jacksonville. "With Coach Bradley, I get the sense that he's not only a great coach, but he's a great individual as well, and I just thank God for the opportunity just to be a part of this."

"Coming from SMU, it's kind of similar to me coming to Jacksonville, I feel like. Going to SMU, they were a program that was rebuilding, trying to eliminate the perception for how the team was in the past, not making a bowl game and things of that nature and I kind of feel myself coming into that same type of situation."

As the Jaguars enter the 2013 year with the odds stacked against them, Banjo will look to continue to beat those odds. Odds that haven't stopped him yet.

"I'm better from a physical standpoint, and mentally I'm a lot more humble. Not that I wasn't humble before, but just being a year out of it just makes you look at things from a much different perspective. So I just thank God for the opportunity every day I'm here. I've just been given a tremendous blessing and I'm taking it a day at a time."

• Where does De'Leon Eskridge fit on the Jaguars?