Jaguars OTAs 2013: Starting CB position will be sorted out soon

Share All sharing options for: Jaguars OTAs 2013: Starting CB position will be sorted out soon

As the Jacksonville Jaguars head into OTAs before training camp, the team will get a better idea of who will comprise the starting cornerbacks once training camp begins at the end of the summer. Going into practice today, third-round pick Dwayne Gratz is an assumed starter at one of the outside cornerback positions, but the bigger question will be who starts opposite him. 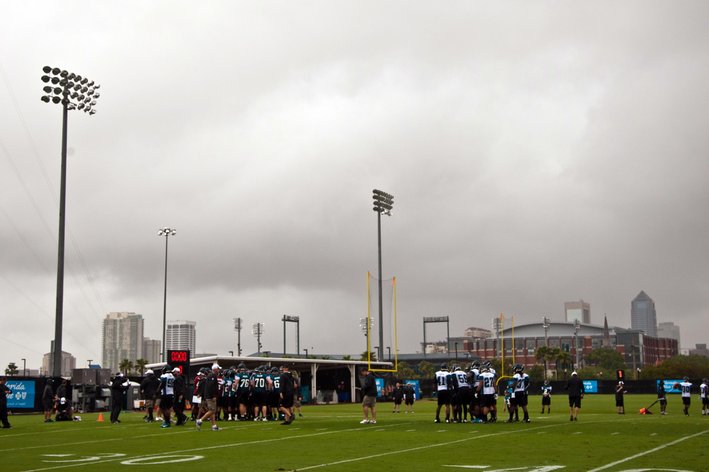 The Jacksonville Jaguars will begin their organized team activities (OTAs) on Monday morning, with all of their rookies and veterans together finally for practice.

The competition for the starting cornerbacks on the Jaguars defense should be a good one, between the aforementioned Gratz, veterans Alan Ball and Marcus Trufant, and the young guys in Mike Harris, Jeremy Harris, and Demetrius McCray.

John Oehser of Jaguars.com suggests that Alan Ball could be the early favorite to land the job, which makes a lot of sense, as I do think the Jaguars coaching staff would like a veteran to earn at least one of the starting roles. Ball struggled a lot when he was with the Dallas Cowboys and Houston Texans, but a lot of his struggles came when playing off coverage. On the Jaguars defense he'll be up on the line of scrimmage playing more press coverage.

Personally I think the recently signed Trufant might have a good shot to earn the role. While Trufant played the nickel position on the Seattle Seahawks last season, he was forced inside because the Seahawks had two young corners who emerged and injuries at the "nickel corner" position. Trufant may still have the skill to start on the outside, at least early on for the Jaguars.

It will be an uphill battle for the late round picks like Harris and McCray, but they both have the skills that Bradley and company look for at the position. It should be one of the most interesting battles to watch going forward into training camp.