Marcedes Lewis ready for his 'reward' in Jaguars offense

Share All sharing options for: Marcedes Lewis ready for his 'reward' in Jaguars offense

Jacksonville Jaguars former Pro Bowl tight end Marcedes Lewis has been relegated to essentially playing right tackle the past two seasons, which has forced a noticeable dip in his production as a wide receiver. The team has struggled at the right tackle position which has forced Lewis to be held in more as a blocker than he usually would.

Lewis will gain with Joeckel 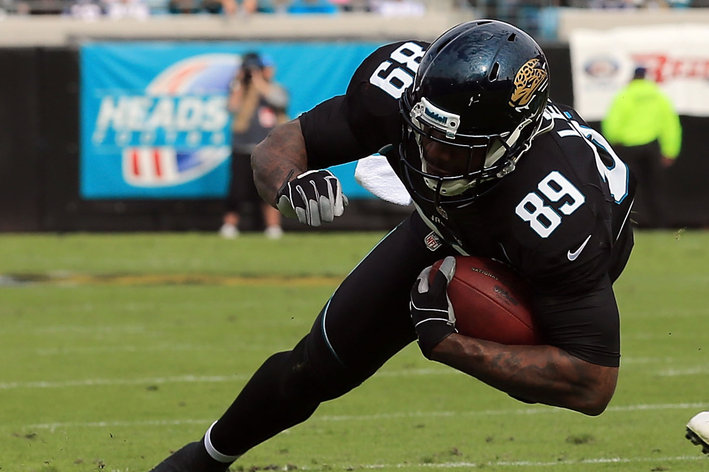 The former-Pro Bowl tight end has had to act as a second right tackle at times due to the struggles of Eben Britton, Cameron Bradfield and Guy Whimper over the past four seasons.

With the addition of first-round pick Luke Joeckel, Lewis should have more freedom to be involved in the passing game and he's excited about that possibility.

"Obviously I don't mind blocking, that's why I do this game, that's why I play I love the blocking it's not a problem. At the same time you want to be rewarded some time," Lewis told reporters after OTA practices last week. "Our philosophy is getting the ball in our playmakers hands and letting them score touchdowns and it's fun to be a part of that again.

By all accounts early in OTA practices, Lewis has been heavily involved in the Jaguars new offensive scheme and the addition of a functional right tackle should allow him to be more involved as a pass catcher, especially in the redzone where his height and leaping ability can be used as a mismatch.

"I'm going to go out there and get better every day, that's all I can control," Lewis said when asked about getting back to the Pro Bowl in Hawaii. "Everything else will fall in place."

• How Duval helped me battle with depression