What are some of the repeated concepts Jedd Fisch used during his tenure with the Hurricanes?

Similar to what we've heard coming out of OTAs, this is a very up-tempo, fast-paced offense. Miami rarely huddles during the first half of games. The play ends, they make their substitutions, the players look to the sideline to get the play, and they're snapping the ball quickly. The tempo made it difficult for the TV broadcasts to show replays (concurrently making it hard for me to get a feel for the route combinations), but I noticed a few concepts repeated throughout the four games. 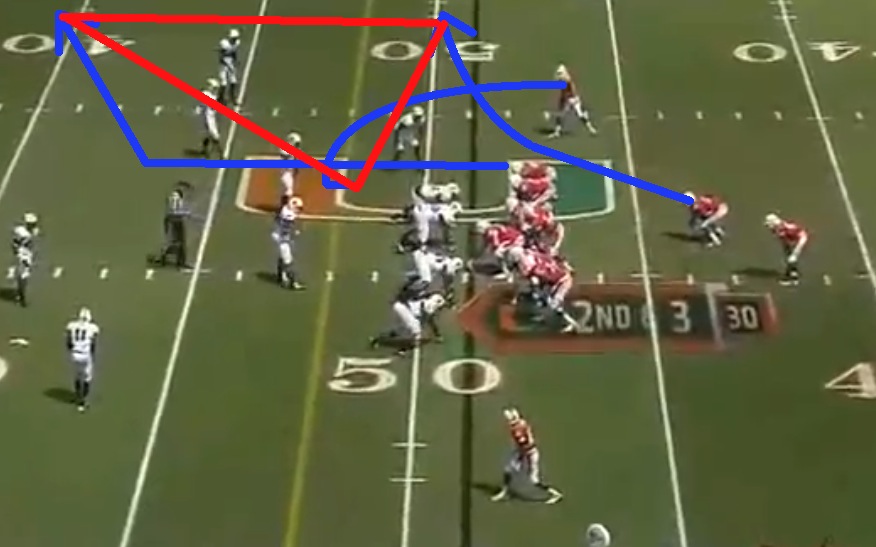 In critical situations, Miami's go-to play is the "Snag" concept. "Snag" combines a High/Low stretch and a Horizontal stretch to create a Triangle read. The High/Low combination is a Corner Route and Flat route (also referred to as "CHINA" - short for Corner Hi/Lo. The Horizontal stretch comes from the Mini-Curl (or "Snag" route) run by the outside receiver crossing with the Flat route.

(Snag being run off of Outside Zone Action)

The beauty of Snag is that it can be run from any conceivable formation where three receivers can release to the same side - whether it's a shotgun/spread set or off of play action in the I formation - and the progression remains the same (Corner to Flat to Curl). It's an extremely versatile concept that can have success against almost any coverage, especially when combined with other route combinations on the backside.

(Miami running Snag as a dropback pass from a shotgun set)

Miami faces a lot of Quarters/Two-Read type coverages, which allows teams to get both safeties involved in the run fit quickly (essentially creating a 9 man front after the snap). One of Miami's favorite plays when they're looking for chunks of yardage in the passing game is the "Anchor" concept. The "Anchor" play is a High/Low stretch on a safety that looks to put him in a bind with two receivers in his area - one in front, and one behind.

You can read more on Two-Read coverages here, but the main idea is that the safeties and corners will play a matchup-zone by pattern-reading - with the safety keying the No. 2 receiver (and taking him on any type of vertical threat). This isn't strictly man-to-man defense either - if the No. 2 breaks off with a shallow route, the safety will need to be aware of deeper in-breaking routes coming from the #1 receiver. 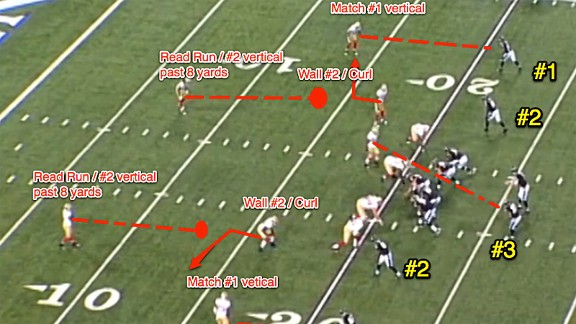 via Chris Brown of Grantland.com

The Anchor concept takes advantage of overly-aggressive safeties by using their rules against them. In the picture below, Miami also has the slot receiver to the boundary come in motion and execute a fake Jet Sweep before heading into the flat to pull the linebacker away from the Post/Dig combo (and taking this from a plain High/Low to a true Triangle read). The slot receiver runs a 10-12 yard Dig route - enough depth to make the safety play him honestly on a vertical route. If the safety aggressively jumps the Dig (and he often will), a window will open up behind him for the outside wide receiver running a Post route.

(The routes aren't exactly to scale, but you can see how the Dig/Post combo puts the safety in a bind.)

For this route combination to work, the quarterback needs to innate sense of both timing and anticipation by the quarterback. The Dig route syncs with the top of the quarterback's drop, with the Vertical window for the Post opening directly after his hitch step. Like in GIF above shows, anticipation comes into play as the quarterback will usually have to make this throw before the Post runner clears the underneath defender. If he waits for the Post to come wide open, it will actually be too late - as a good corner will have enough time to recover and play the ball, as shown here:

As far as Miami's run game goes, it's very heavy on traditional Zone Blocking Scheme concepts (50% of their called runs are either Inside or Outside Zone). They also run some Power O, Tosses, and Draw plays to change things up, but Inside and Outside Zone are the primary diet (and the basis for the Play Action game). Like I mentioned in the last post, they do have a Wildcat package, as well as a number of pick/rub plays and creative uses for their runningbacks in the pass game (all of which I'll get to it in later posts).

• Love: "There’s nothing wrong with me"

Breaking down the Jacksonville Jaguars 2013 offense