The Jacksonville Jaguars drafted former Florida Gators safety Josh Evans in the sixth-round of the 2013 NFL Draft. Evans, who will likely play a reserve role his rookie season visited with Richard Miller on 1010XL's Miller On Sports on Tuesday evening.

How are OTAs going thus far?

It's going pretty good. We got a chance to get with the veterans and see how they function, this whole time it's just been very competitive.

Who's the coolest veteran in the locker room?

D-Lo (Dwight Lowery) and (Alan) Ball, those guys have been pretty cool. No one's given me a problem yet.

As you can see the secondary is a spot that's real competitive right now and everybody going at it each day taking advantage of the opportunity, but if I could say one word right now that could describe the secondary it's competition. Every day we're out there trying to get better, day in and day out, and like I said taking advantage of the opportunity and may the best man win.

What's the other word besides competition?

I would say determination. Coming in as a rookie you can't lose focus. You have to have the determination to reach the goal that you're trying to reach and I think that's something I put real high on my standards. To be real determined on what I'm coming here to do, to play right away and see the field.

Are you also working with the special teams unit?

Yes sir. I'm working on the kickoff unit and the punt unit as well.

Is it weird with no Montell Owens now?

It's been a little different, but that energy and everything is still there. Special teams is always one of those positions that is the fastest ways you can play, earning your spot and getting on the field. 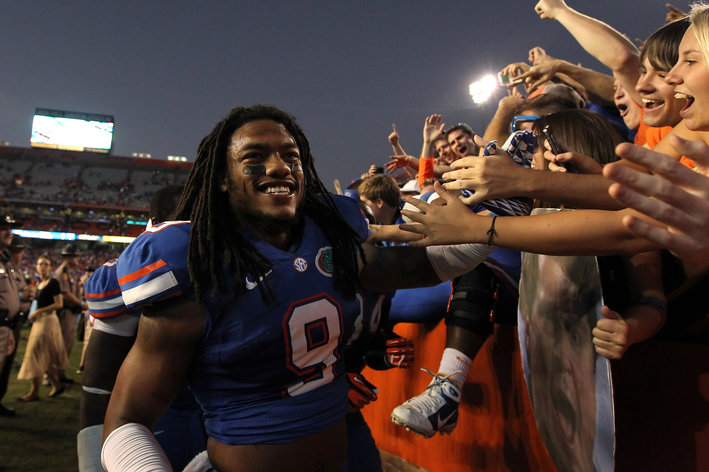 University of Florida Safety Josh Evans was the Jaguars 6th round pick in this years NFL draft, and was relatively unknown to many compared to Matt Elam, his counterpart at Florida. But when looking closer, he appears to be a good fit for Gus Bradley's defense.

How do those helmets look on the practice field?

What is your best on-field attribute?

I'm very vocal. Being the last line of defense you have to know how to communicate and as a safety communication is key. I've learned to know what our linebackers are doing what our front, our D-line is doing, what the corners are doing and whenever you know how to adjust and anticipate certain calls, your reaction time is even quicker. I think that helped me over the course at Florida is being able to get adjusted, to know 'Ok if we get this motion or this type of formation what's my next adjustment?' That's huge for a safety, knowing those types of things.

He was more than a playmaker man. He was one of those guys who was very passionate about the sport. There wasn't a game that went by that he wasn't deep into it. He kinda jumped into a different man on the field and was different off the field. It was great playing with him. Me and him kind of consider each other like brothers on and off the field. When he would make a big play I would be like 'Oh man' and feel obligated to go out there and compete with him. His love for the game is unimaginable. That's a guy who I think will be playing the game a long time.

Do you have a primary goal for your rookie season?

Your draft reports said the thing you needed most improvement in was your coverage skills, where have the Jaguars coaches said they'd like to see you most improve in?

It's been different things. As far as the difference from college and now is I kind of play both positions, free and strong so at Florida last year there were some changes where I'd play in certain situations and learned new things. I feel pretty confident in myself now after repping it that they've kind of been using me a little bit at the box and at the free so I can learn both safety spots and it's kind of been similar to the style of defense I ran at Florida. Our head coach Gus Bradley was the D-coordinator in Seattle and our defensive coordinator was the D-line coach when he was in Seattle a couple years back, so there's some familiarity in our defensive scheme where I fit pretty good in this defensive style.

Do you prefer free or strong safety?

Interception for a TD or fumble for a TD?

Are you a high stepper?

I like to high step a little bit, but you know in college they don't allow that.

So in the NFL will you high step?

Did you get better today?

Absolutely did, even though practice was cut short the little bit of time I was out there I did get a little better. We've been installing a lot and I think we were up to 20-something plays within four days. So the installment's been crazy, but it's been improving everybody's games.

Have you settled into Jacksonville since you've been drafted?

I'm feeling pretty comfortable. They have us staying at the Garden Inn now, so we've kind of just been going back and forth there. I still haven't been around yet, the places around and getting adjusted to Jacksonville yet but from what I hear so far it's a pretty laid back town and it's pretty cool here.

What's the coolest thing Jaguars fans have done to welcome you to the first coast?

I gotta go with after my first rookie mini-camp, I'm walking off to sign some autographs and there was a little kid, had to have been about the age of four, and he said something that really touched my heart. It was almost tear dropping. The kid look at me, told me to sign his hat and looked me in the eyes with gloomy eyes and told me I was his hero. That was all I needed to hear walking away, to hear that from a young kid.

Any smack talk between you, Mike Harris, and Lonnie Pryor?

You know what, we haven't said anything yet but I know down the line there's going to be a Florida-Florida State problem. It's friendly, we're all on the same team, but I'll tell you one thing -- there's nothing like those Florida-Florida State team games. It's real personal, it's all about trying to fight to be the best team in the state.

Is there a point where Gus Bradley isn't full of energy?

Not at all. That's him all the way. He's fully energetic throughout all practice. Seeing all that energy it rubs off on us as players. It's kind of like seeing that leader, when the leader is energetic it pushes you to be like 'Wow, I gotta do this. I gotta go a little faster. I gotta get better.' Seeing his energy and the music out there you feel comfortable to compete. That's one thing he's been preaching about.

As a rookie, were you able to pick any of the songs that were played at practice?

No, I haven't been able to pick any of the songs yet, but I could see myself down the line telling them to play one of the songs on there.

Who's more intense: Urban Meyer, Will Muschamp, or Gus Bradley?

That's a good one. Being that I'm just now getting adjusted down here, I'm going to have to go with Will Muschamp. I had to deal with him for two years and that's one guy I could say 'He gets after it. He gets after it.' If you want to see how he gets down you can go on YouTube and type in the Georgia game and it shows it all, how energetic he is, but he's a great coach. Hands down, he taught me a lot of stuff and he's just a guy who takes his job really serious and is very passionate about this game of football.

• Love: "There’s nothing wrong with me"

• Sen'Derrick Marks forcing his way on the field