Jaguars want Denard Robinson to get 10-15 snaps per game

Share All sharing options for: Jaguars want Denard Robinson to get 10-15 snaps per game

The Jacksonville Jaguars added a "slash" type player to their offense in fifth-round pick Denard Robinson in the 2013 NFL Draft. Robinson was an explosive playmaker with the ball in his hands, especially rushing the football, for Michigan in college and the Jaguars want to add that element to their offense. 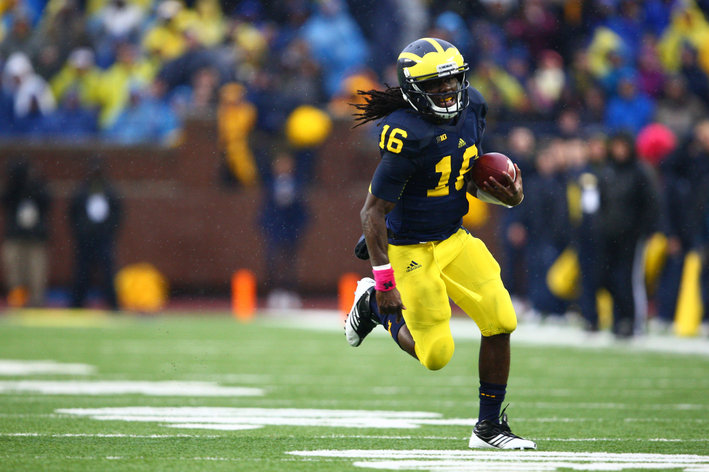 The Jaguars drafted Denard Robinson in the fifth-round of the 2013 NFL Draft to play running back, but he's going to have to do some things to get suited for the position.

Jaguars general manager Dave Caldwell noted on SiriusXM on Tuesday evening that the team would like to get Robinson "10-15 snaps" per game, including returning kicks and playing some wide receiver, as well as rushing the football.

The plan for Robinson is to line him up at running back, in the slot as a wide receiver, and even out wide as a receiver. Point blank: Get him the ball and let him make plays, like he did at Michigan. In Robinson's one practice at rookie mini-camp, Robinson's explosion and speed was noticeable on the field.

The back up running back spot during the preseason will be an interesting one to watch, as it appears the battle between Robinson and Justin Forsett for touches after Maurice Jones-Drew is on.

• Jonathan Cyprien could be an impact rookie