2nd part of a series of Scouting notes I will post on BCC for some 2014 Draft Prospects that I believe the Jaguars could target. This is very early in the process and in no way are these final opinions, just some early thoughts.

As you will see in the opening of my previous scouting notes on BCC ( here) I predict the Jaguars will have several holes in their defensive front 7 when the 2014 NFL Draft rolls around, especially considering they didn't add a single player to any of those spots with any of their 8 draft picks in the 2013 Draft. One of the positions I predict the Jaguars will have a hole is the LEO DE spot. One of the positions that many draft analysts, including myself, predicted the Jaguars would make a priority during the 2013 draft was the "LEO" DE position, due to their new defensive scheme and a VERY lackluster pass rush in 2012.

All year people predicted "LEO's" like Dion Jordan, Barkevious Mingo, and "Ziggy" Ansah would be the Jaguars pick at #2. Well the Jaguars went a different direction with the #2 pick, so it was predicted that the Jaguars would draft a "LEO" at least once during the draft. Well, that didn't happen either. The 2 "LEO's" that will most likely sit atop the depth chart for the Jaguars 2013 season are 2nd year player Andre Branch, who is coming off a poor rookie year but has the coaching staff's support and appears to be a good fit for the defense, and 33 yr old Jason Babin, who was claimed off waivers late last season. With Branch still needing to prove himself, and Babin being a stop gap player only, I expect (Maybe I'll be right this time) a LEO to be a target at some point during the 2014 draft, so here is my preseason scouting notes on Georgia Tech DE/OLB Jeremiah Attaochu. 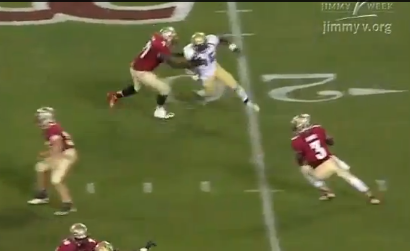 Quick to set up stunts.

Attaochu could actually fill 2 holes on the Jaguars front 7, as his edge setting ability and comfort in coverage leads me to belive he is very capable of playing SAM LB. But his money in the NFL will be made as a pass rusher, and he fits the profile as a LEO DE. He has the size, length, and quick twitch explosiveness that makes him a dangerous player in space.

If he develops a wider array of rush moves, and dips his shoulders to bend the edge and close on the QB more consistently, I think he could be a dangerous player in a scheme like the Jaguars that would let him wine up wide and use his athletic abilities. He is a player Jaguar fans should keep an eye on, as his scheme fit and pass rushing ability could make him a potential Jaguar target in the 2014 NFL draft.

• Jaguars Film Room: Stopping the run with the Cover-3

• Is Mike Kafka in the Jaguars QB mix?

• The Jaguars are fine taking 5 QBs to training camp