In light of his recent comments regarding the Jacksonville Jaguars' relocation to London, England in 2021, Jason La Canfora has allegedly elected to bypass the painstaking length of real time and go the way of human cryogenics.

Earlier this week, CBS Sports' insider, Jason La Canfora published an article indicating his belief that the Jacksonville Jaguars would be the team that would ultimately relocate to London, England in the near future. Unfortunately for his prediction, after yesterday's events in which Jaguars' owner Shad Khan proclaimed over 60 million dollars in stadium upgrades, La Canfora's prediction appeared unlikely to say the least.

After a brief Twitter scuffle with various Jaguars fans, La Canfora made it clear that his prediction for the franchise's location was still very much alive - only pushed back 8 years to 2021.

According to unnamed sources, La Canfora is simply unable to wait this one out. The payoff of being right about a London relocation and throwing it back in the faces of the Jaguar faithful is too tantalizing to resist.

And that's where cryogenics come in.

The very same source disclosed La Canfora's intentions to be cryogenically frozen at the infamous Alcor Life Extension Lab (the same one that houses baseball great, Ted Williams' two frozen pieces) later this month in order to quicken his payoff and quench his thirst for revenge.

"Just you wait. I'll show them," La Canfora said with a grin. "To me, it's just a very long, very cold nap - and more than worth the wait. 8 years and I'll be back, the Jaguars will be in London. Then we'll see who the idiot is."

Unfortunately, human cryogenics is far from an exact science in 2013. While the freezing process with liquid nitrogen can be done, thawing the person is where things get tricky. In fact, as many specialists have found, the only true measure of cryonic thawing success is found in Hollywood - and the results are quite favorable.

Whether it is Han Solo wandering around blind in the dark of Jaba's palace, Wesley Snipes and Sylvester Stallone being thawed (as seen below) in the below-average 90's action-film, "Demolition Man", or Terminator 2's nitrogen spill that stopped the T-1000 (Robert Patrick) in its tracks, all resulted in a safe and full recovery. Thus, the lack of thawing mishaps in Hollywood cryogenics bodes well for La Canfora's plans. 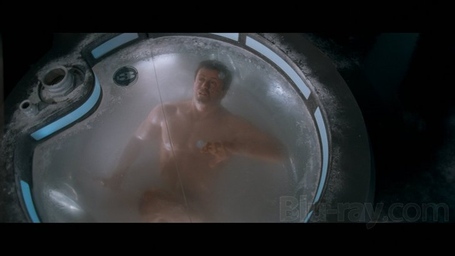 Not to mention that after 8 years, who knows how much cryogenics will have progressed?

Jason La Canfora does. And he doesn't foresee any issues with cryogenic thawing.

"I've seen the movies and I've seen the future, trust me." La Canfora said, "Han Solo wasn't permanently blind, and Snipes and Stallone came out just fine after almost a hundred years of cryogenic freezing. Even the T-1000 was able to use its mimetic poly-alloy to reconfigure itself. It's perfectly safe, I assure you."

"In 2021, not only will the Jaguars be in London, but cryogenics will have progressed far beyond processes as simple as defrosting a frozen human." La Canfora said, "Why wait it out when I can wake up after a few short years and reap the benefits?"

La Canfora is just as certain about scientific advancements in the future as he is football matters. The Jaguars are destined for London as far as he is concerned despite what yesterday's events might tell him.

"There is absolutely no doubt in my mind the Jaguars will be the team to go to London." La Canfora stated, "Them or the Rams. Or if not them, then certainly one of the other 30 NFL teams. Book it."

But will La Canfora wake up to a different world in 2021 with an Austin-Powers-esque culture shock? That may be for us to find out for ourselves.

"I could tell you, but wouldn't that kind of ruin it?" he said, "Just wait and see. The important thing is that I'll be right and they'll be wrong. When I step out of that cryogenic pod, I'll know those 8 years were a minuscule price to pay in comparison to the feeling I get being the guy who knew all along."

La Canfora refused to comment on the new evidence regarding stadium upgrades and continued reassurance on behalf of the Jaguars front office that the team would stay put. Rather, he chose to reiterate his previous sentiments.

"Hit me back around '21." He said, "They'll be serving tea and crumpets at Jaguars games. And don't forget, I told you so."