What does Tobais Palmer bring to the Jaguars?

The Jaguars' draft picks aren't the only rookies that will be making noise in training camp.

Share All sharing options for: What does Tobais Palmer bring to the Jaguars?

When David Caldwell took over the Jaguars general manager job, he hit the film room and one thing was obvious. The 2012 Jaguars lacked speed.

It didn't take long for the first-year GM to adress the issue, either. The team drafted Denard Robinson and Ace Sanders on day three of the 2013 NFL Draft and continued to add speed in undrafted free agency. Among the most compelling signings in the post-draft free agency period was North Carolina State wide receiver Tobais Palmer.

If speed is what Caldwell was looking for, he found it in Palmer, who ran the 40-yard dash in 4.31 seconds at NC State's pro day after posting 781 receiving yards and six touchdowns in his final season with the Wolfpack.

Palmer's ability to return kicks may be even more impressive. As a senior, he piled up over 1,200 kick return yards and scored twice. His most impressive outing of the season was against Clemson, when he set an ACC record with 496 all-purpose yards.

The numbers are nice, and his 40-time is flashy, but what can Palmer realistically contribute to the Jaguars? Here's a quick breakdown.

What Palmer does well

Palmer's speed is not just evident in the 40-yard dash. It translates to his game, where he gets upfield quickly on kick returns. Rather than dancing around and trying to create plays by going east and west, Palmer is decisive and agressive with the ball in his hands on a kick return. He understands how his blocking is set up and uses his burst and acceleration to hit holes with authority. There is a calmness about him when he collects the ball and that poise will be key in the NFL. Here's an example of his vision and cutting ability.

Here Palmer was in a situation where a lot of young kick returners with speed will try to break the ball to the outside. There is a small amount of room to do so, but Palmer trusts his blocking and hits the hole with authority.

The result? Palmer picks up 15-20 more yards than expected. The blocking was solid, but Palmer took a small crease and trusted his eyes and speed. Look at the open space he created.

Kick returning isn't overly complicated, but Palmer seems to have all of the tools to be effective right away. The speed, vision and patience are all huge pluses.

As a receiver, Palmer presents some upside as well. His 5-foot-11-inch, 178-pound frame is less than ideal, but as mentioned, he has the speed to make up for it. His best fit appears to be underneath, as he has had success finding the soft spots in zone coverage and is dangerous in the open field when the ball is in his hands.

That's not to knock Palmer's ability to be a vertical threat, though. His route running isn't a finished product, but he has some subtle skills that work wonders. Given his speed, he doesn't need much to gain separation a defender. Here's an example.

Palmer is running an out-and-up route against what looks like zone coverage. He finds the soft spot on the out portion of the route and is an obvious threat. He uses head and hands fakes to feign the completion of his route. 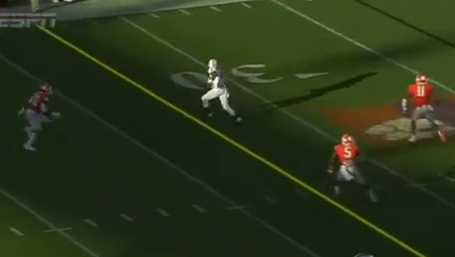 The deep safety on the left side of the screen is going to take a step up and that's all Palmer needs. 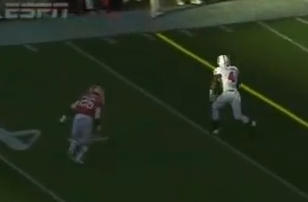 Palmer is able to slip through contact and gain separation. The result was a long touchdown for NC State. 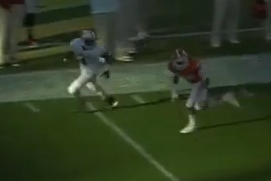 That's dangerous speed right there. He might need to be a bit more crisp in his routes at the next level, but his acceleration and ability to cut on a dime will translate to the NFL.

What Palmer needs to work on

While Palmer excels against zone coverage, he has some trouble in man-to-man situations, as he gets outmuscled often. That will limit his versatility a bit at the next level, but it's also not an issue that can be improve upon.

The more pressing issue with Palmer as a receiver is his tendency to body catch. Whether it's a focus issue or just a bad habit, Palmer doesn't hand catch consistently enough to be relied upon at this stage in his career. For all of his positives above, Palmer did go undrafted. A look at some of his other games (in which he didn't break records) reveals some fundamental issues with his ability to play receiver. In addition to the body catching and lack of physicality, his body control isn't always there and his balance seems off at times.

As natural as he appears in the kick return game, Palmer is still getting used to playing receiver. He came out of junior college as an athlete, having played running back and cornerback earlier in his career. It's easy to see his running back background once the ball is in his hands, but refining his game as a receiver may take a bit of work.

Where does he fit in?

Palmer is actually a strong candidate to make the Jaguars' 53-man roster. With Justin Blackmon suspended for the first four games of the season, Ace Sanders may be thrust into a large role as a receiver early on. Having another experienced and dangerous option to return kicks will be useful for the Jaguars. Sanders excels in that area as well but the Jaguars may not want to lean on him there depending on his offensive role.

The Jaguars recently made news by listing Denard Robinson as an offensive weapon on the depth chart. Palmer ought to have that same label. When the ball is in his hands, he's going to make something happen. Caldwell and new head coach have stressed competition, and Palmer brings that. He injects speed and upside into an offense that could use it. He'll be someone to keep an eye on in training camp and throughout the preseason.