Zone blocking schemes became all the rage in the NFL in the late 1990s through the early 2000s after Mike Shanahan and Alex Gibbs implemented it as the base running game for the Denver Broncos. They reeled off consecutive Superbowl wins on the legs of Terrell Davis and featured a number of successful (and young/cheap) runningbacks afterwards.

There are two major plays in traditional zone blocking - Inside Zone and Outside Zone. Outside Zone features "reach" blocking, where the offensive linemen try to attack the outside shoulder of their man and seal them (or drive them to the sideline if unable to reach). Inside Zone is more of a designed cutback, with the offensive line looking to "drive" block and reset the line of scrimmage, put the defensive line into the linebackers' laps, and create a cutback lane on the backside of the play.

Zone blocking on offense shares similarities to matchup zones on defense in basketball and pattern-matching zones on defense in football - each player has an "area" in theory, but once the play begins everything essentially turns into man. Figuring out who blocks whom isn't complicated once we understand the basic ideas behind the offensive linemen pre-snap reads, or keys: 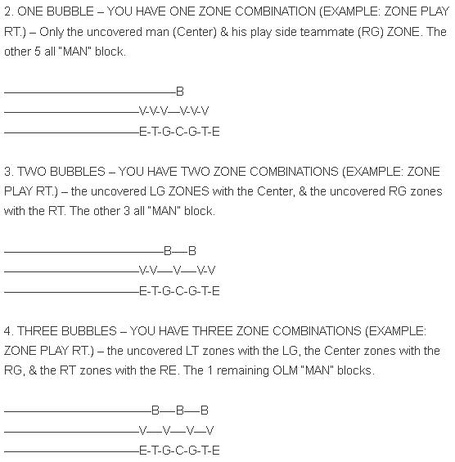 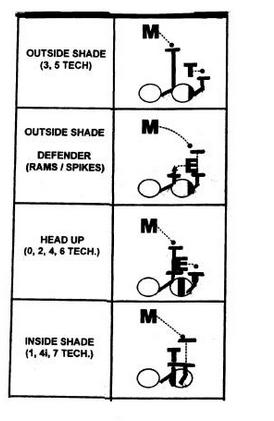 These combination blocks/double teams that occur at the bubbles essentially turn into a game of two-on-two between the offensive linemen and a defensive lineman and linebacker.

It isn't necessarily pre-determined as to who will be slipping off the double-team in order to pick up the flowing linebacker post-snap. When I coached offensive linemen, we used the saying "four hands on, four eyes up" for double-teams. In essence, both lineman would attack the defensive linemen in unison to move him. The key (and where the "four eyes" part comes from) to successfully executing this comes from either offensive lineman being able to slip off the double to pick up the flowing linebacker. If either offensive lineman buries himself too far into the defensive lineman, it will be almost impossible for him to re-direct with the linebacker's flow. 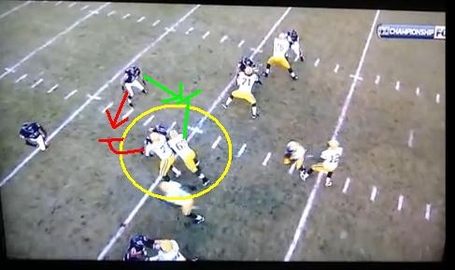 Both offensive linemen are using half of their body on the double-team - staying square to the line of scrimmage to prevent the DL from splitting the double. They both must keep their eyes on the linebacker, as his flow will determine who slips off and who stays on the defensive lineman.

It's not just important for the offensive linemen to understand how the defensive front affects the blocking scheme, but for the runningbacks to as well. Zone running isn't about just getting the ball and freelancing until you find a lane. He has to read the flow of the defensive line - starting from the end man on the line of scrimmage and then back inside to the defensive tackle.

Like the video above shows, if everyone up front is able to successfully "reach" their man on the Outside Zone, the play goes just as designed off tackle. Depending on the defense's (over) pursuit, however, the play can hit all the way back inside. The play truly stretches the run defense laterally, and once they start over-committing the cutback lanes for Outside Zone become huge, gaping holes to run through.

The Jaguars ran a ton of zone blocking concepts under former offensive coordinator Dirk Koetter, so many of the offensive linemen (and Maurice Jones-Drew) already have a good amount of experience with these types of runs, rules, and reads. Hopefully the offense will be able to restore their tough-as-nails running game and have more success than last year, as the team really struggled at rushing with any consistency once MJD got hurt.