Share All sharing options for: Jaguars Film Room: Coverage with the Cover-3

There are a lot of other blogs that have written on Cover 3 pattern reading, and do so far more comprehensively than this post will, and I'll link to pretty much every resource I've found on the subject at the end of this post. Most of these articles center around Nick Saban's single-high coverage philosophies, however, there is a ton of overlap that applies to what Seattle does under Pete Carroll and what the Jaguars will do under Gus Bradley. Keep in mind that Carroll nabbed Dan Quinn to replace Bradley - and Quinn was essentially running Saban's defense verbatim as the defensive coordinator at Florida under Will Muschamp. 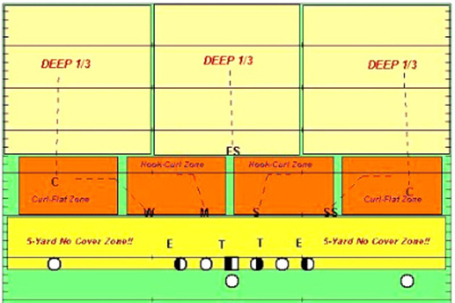 Air Raid teams have a saying that goes "you can complete anything against Cover 3." There's an element of truth to this - with only four underneath zone defenders, it's susceptible to horizontal stretches and the quick passing game. Further, there are huge voids in the seam, plus the ever-present threat of getting out-numbered on the back end against Four Verticals. 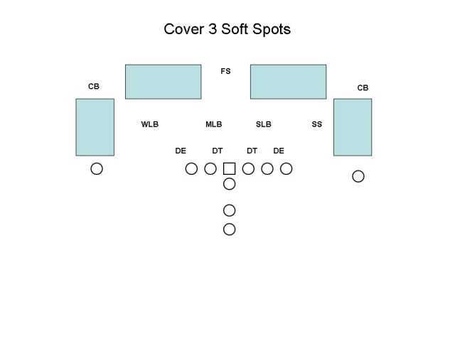 So how is a team like Seattle, who bases out of Cover 3, able to have so much success running a defense that has so many natural voids? A large part of that answer is talent. Seattle has done an incredible job drafting and developing their talent on the back end, and the Jaguars made upgrading the secondary talent a major priority in April's Draft. The other part to the equation is using pattern-reading principles to match the offense's routes and close off those huge voids.

Pass catchers don't all run into the same general area - they run complimentary patterns to try and stretch the defense out and get defenders to chase and come out of their area. Defenders must be wary and know that if their man is going out, another receiver is likely coming an in-break, or that if their man breaks short, another wide receiver is going deep. Instead of the zone defenders dropping to a specific area of the field and breaking on the ball as it's thrown (known as "spot dropping"), they will read the depth of the quarterback's drop (shorter drop=shorter pass concept) combined with the movement of the wide receivers post snap to try and predict what route combination is coming. 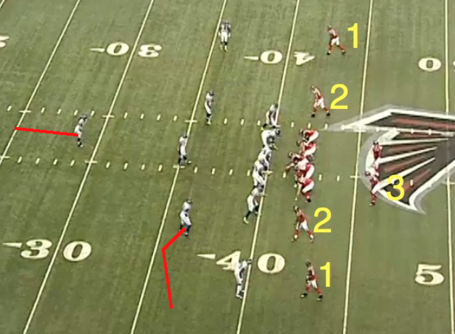 Note that the #2 receiver to the top of the screen is actually Tony Gonzales. However, the offset runningback to the left opens the possibility of three-man route combinations to overload that side of the field. So Seattle has responded with Kam Chancellor down in the box to that side, preparing to drop into the Flats.

The offense still has the ability to send players in motion and change the formation strength pre-snap. When this happens, the defense must adjust accordingly, by either expanding to the new strength or (like pictured below) rotating the safeties to the new strength. 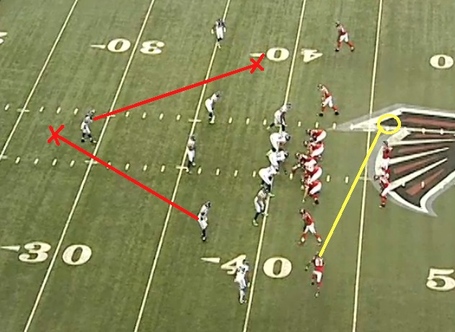 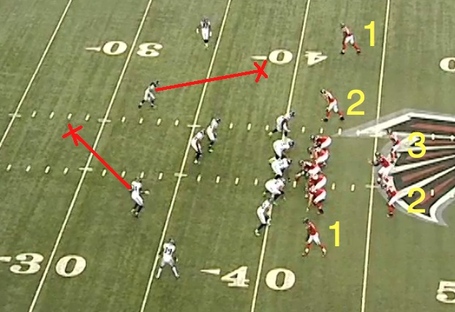 As soon as Harry Douglas begins the motion, the safeties start rotating. Douglas settles into the backfield creating a 2x1 set with two "runningbacks" Re-counting the potential receiving threats again. Earl Thomas comes into the box to the "new" three-receiver side with Kam Chancellor replacing him over the top to cover the Deep Third.

Now that we know how the defense numbers the receivers' distribution before the snap, the next step is learning the actual rules of pattern-reading. Remember, the pass defenders aren't just dropping to an area and breaking on the ball, they're looking to take away specific things, starting with vertical threats up the seam (the biggest potential void in the defense). Courtesy of Shakin the Southland:

Flat - Stays inside the alignment of #1 receiver to that side but stays outside everyone else, so any receiver that comes toward the sideline must not get wider than the flat defender is playing. As we defined before, it means he can't let anyone cross his face without breaking on the route. His aiming point in his drop is 10 yards deep in the seam and anyone that comes nearby should be rerouted by force. The man playing the flat or curl/flat area is generally the guy with the toughest assignment because of the amount of yards he must cover.

Hook/Curl - Original drop inside the #2/3 receiver, and must never let someone go up the seam undefended. Based on the release of the #2 receiver, he stays on the inside edge of the numbers. If he's on a TE, he must get his hand on him. Exactly what he does to him depends on whether the TE starts outside or inside from the LOS. If he goes outside, the defender drops 10 yards and immediately looks for a Smash pattern.

Deep Coverage - Corners take anyone man/man who goes deeper than 12 yards from the LOS, while the middle coverage defender (FS/SS) watches the seams to either side.

These rules are pretty universal against almost any pass concept the defense can see. As such, it's easy for sub package players, such as a nickelback or a third safety, to come in and execute the exact same coverage responsibilities as the man he replaced. Just remember that the underneath defenders priorities go (in order): 1. Re-route any vertical threat to protect the seams and then 2. Read for a corresponding in our out break depending on their relation and leverage to the receivers post-snap. 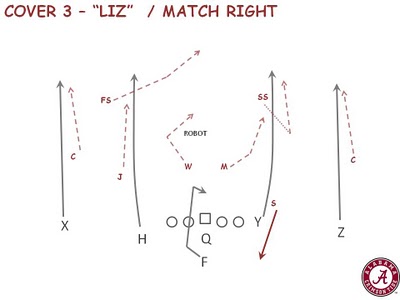 #1 presses vertical, the corner takes all of #1 - #2 presses vertical, the C/F players takes all of #2
The inside linebackers will match #3 as he presents himself, looking to expand from the hook zone. By carrying the two inside verticals, remember you still have a middle of the field safety, so the backer/safety carrying #2 can maintain a low-shoulder, outside leverage on the receiver. This puts him in great position to discourage the SAIL (or 'pole') deep out break of #2 if it were to develop (past 12-15 yards).

Image and Explanation via BrophyFootball.blogspot.com

Here's a different pattern-reading example from the NFC Divisional Round against the Falcons. To the strongside, Atlanta has called on our old friend: the Snag Concept (one of new offensive coordinator's Jedd Fisch's favorite pass concepts). On the backside, they're running the Smash or CHINA Concept, which is the Snag minus the Flat route (which turns it from a Triangle Stretch into a Vertical Stretch). 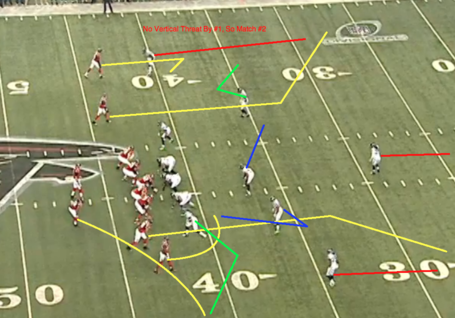 The cornerbacks will drop using the Shuffle Technique in order to read the quarterback's shoulders and the depth of his drop while also looking for vertical threats from the outside/in (if #1 goes vertical take him, if not look for #2 to break deep late). The strongside Flat defender will drop at a 45 degree angle to protect the Seam and will then will break downhill once the runningback crosses his face. The strongside Hook/Curl defender also drops to protect the seam while looking to wall off or close on the first threat of an inside break by a receiver. The weakside Flat defender maintains his relationship outside of the #2 receiver. With no Flat threat to cross his face, he should maintain that leverage (remember, we want him to discourage the "Pole"/12-15 yard Out route by the #2 wide receiver - by protecting against that, the Flat defender gets in the throwing lane against the deep Corner route as well) and look to break on the Hitch late if the quarterback goes there. The weakside Hook/Curl defender drops to protect the seam and looks to take the first threat of an inside breaking route (and there are none to his side). The deep safety must split the difference between the two slot receivers and play them both honestly while assuming they'll both run seam patterns to try and stretch him horizontally. 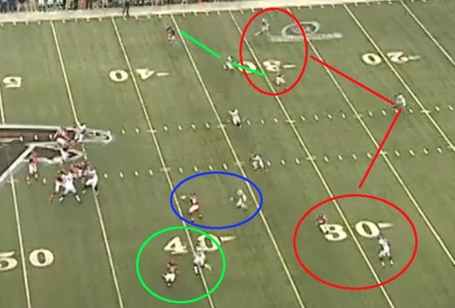 (Red=Deep Third, Blue=Hook/Curl, Green=Flat; Matt Ryan was forced to check down to the Curl for a measly three yard gain)

This is just a brief summary and two examples of pattern-reading out of Cover 3. You can see and read about how it matches up against almost every pass concept imaginable here and here. Again, there are thousands and thousands of words that have been written on this subject, with more thorough and detailed explanations than I'm capable of doing. If you read everything linked here (almost all of them have video, too), you'll have an excellent understanding of how it all works.

Terminlogy, Communication, and How to Read Patterns

Cornerback Rules and Reads From the Shuffle Technique

WR Distribution and Defending the Seams

The Seahawks and Cover 3/Cover 3 Press