"I feel like if I can stay humble like I've been and just play, I should have no problem making the 53-man roster."

Share All sharing options for: Tobais Palmer: More than a training camp star

When the Jacksonville Jaguars open training camp on Thursday, there will be certain players that catch the eyes of fans and coaches. Players with speed and the flash to make big plays in shorts are always annual spectacles, but those playmakers don't always translate their skills to the game.

What does Tobais Palmer bring to the Jaguars?

The Jaguars' draft picks aren't the only rookies that will be making noise in training camp. Matthew Fairburn breaks down the strengths and weaknesses of Palmer.

That will be the challenge for undrafted rookie wide receiver Tobais Palmer, a star in the offseason training activities and mini-camps of early summer. The speedy 5'10, 178-pound receiver will almost definitely be a player that makes waves in training camp, but when the pads go on, he's confident that he'll be able to make the transition into a productive player on the field as well.

If Palmer is to make the 53-man roster, he'll likely do so as a contributor on special teams as well. He is currently competing for the starting kick return role, a job that he thinks he can earn by the end of camp.

"As of right now, I'm sharing kick return reps with Jordan Shipley, but hopefully by the time the season rolls around I'll be on the 53-man roster and I'll be the starting kick returner," Palmer said. "That's my goal: To be on the roster and to be able to play and help out the team in any way possible."

After accumulating 54 receptions for 781 yards and six touchdowns as a senior at North Carolina State, there was some NFL interest in Palmer, especially after he recorded a 4.39 40-yard dash at his pro day. While he wasn't selected in the 2013 NFL Draft, there was enough interest to allow Palmer to choose where he'd like to begin his NFL career.

"They love me and they just want to see me succeed and be part of the team...I feel like it's an opportunity for me to come in and play."

"I had numerous teams call me that day," Palmer said of the last day of the draft. "My mind was just spinning around and trying to figure out which team I wanted to go to, but at the end of the day I felt like the Jaguars had the advantage."

"During the whole training process, they came out and worked me out and saw what I can do. I felt like they already knew what I could do, so I feel more comfortable here. They love me and they just want to see me succeed and be part of the team...I feel like it's an opportunity for me to come in and play."

While he'll have an opportunity to fight for the starting kick return position, Palmer has no illusions about the state of the wide receiver depth chart. With a pair of young receivers, Cecil Shorts III and Justin Blackmon, poised to continue their ascension as a young, up-and-coming duo, Palmer is excited to help as a complimentary player for the Jaguars passing offense.

"Being around Cecil [Shorts] and Justin [Blackmon] these past couple months, just being there and being around them, they bring a lot to the table and a lot of guys count on them to make big plays," Palmer said. "After the season I had last year, and able to add more speed to that, I feel like I can come in and kind of take some of the weight off those guys' backs, have some fun with them and be productive." 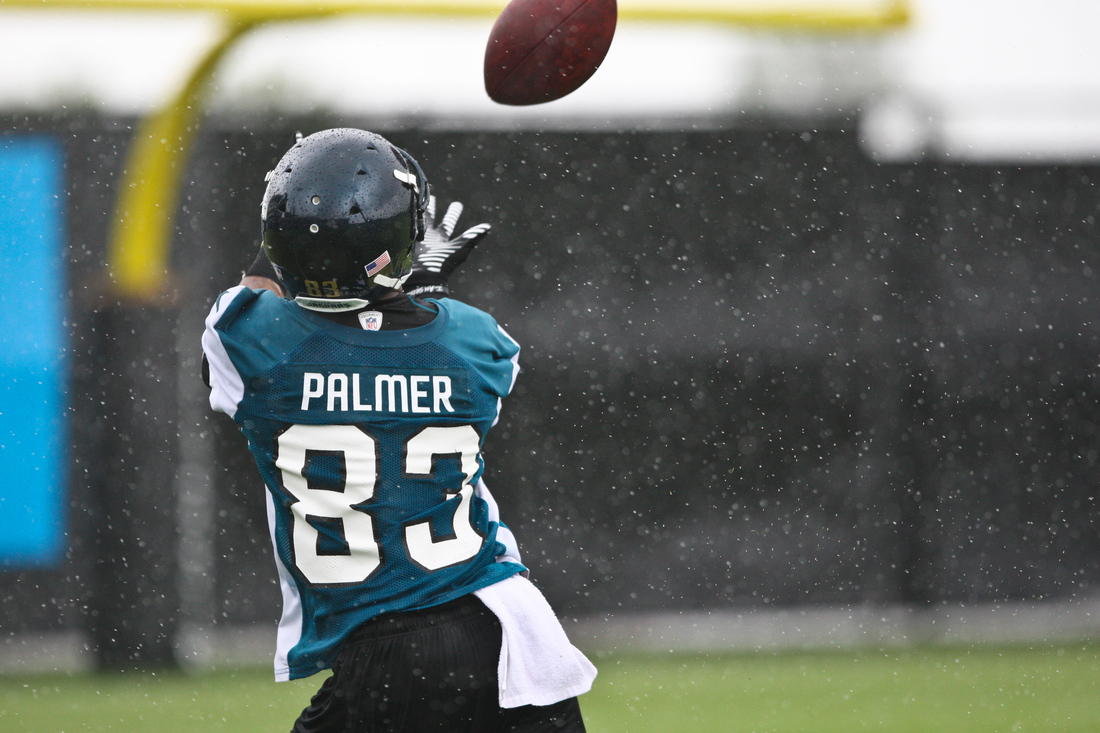 Production would be a welcomed addition for a team that hasn't managed to finish in the top half of the NFL in points scored since 2007. Much of that has been due to poor quarterback play, particularly since the team turned the starting job over to Blaine Gabbert in 2011.

Entering a make or break season in 2013, Gabbert is working to learn his third offense in as many years, but Palmer thinks that he and Chad Henne have what it takes to be productive players.

"It's a new playbook for them as well," Palmer said. "Everyone is learning. I feel like as we get closer to the season, throughout the preseason, I feel like those guys will be able to produce more and they'll be a huge asset to the team, both Blaine Gabbert and Chad Henne."

On a team with plenty of youth and a newfound affinity for speed, Palmer will be one of the lesser-known players looking to be a huge asset with them, but first, he'll have to make the opening week team.

"I just have to worry about myself," Palmer said. "I can only control what I can control. I feel like if I can stay humble like I've been and just play, I should have no problem making the 53-man roster."