JACKSONVILLE -- The Jacksonville Jaguars opened up training camp on Friday morning, a morning in which turned out to be warmer that the start of practice than it was by the end. Did you know your shins can sweat? I found that out today.

It was really the first look we got to see of the team in a full setting under the new coaching staff along with over a 50 percent roster churn. There were a lot of new players to keep an eye on.

"I was impressed with our work ethic and our mindset coming out. We all understand we have some work to do, but it was a good start." -Gus Bradley

The Talk: Much of the talk during the practice was about the quarterbacks and just how not good they were. I don't want to say they were terrible, because they each had their moments, but overall they just were not good. Blaine Gabbert started out erratic and was picked off by Mike Harris, in what would have been a pick-6, but later connected on a deep pass down the sideline to rookie receiver Ace Sanders. Then he'd miss someone downfield by about five yards.

Chad Henne was the same way, but a bit worse. Shortly after Gabbert was picked off in 11-v-11 drills, Henne had his first two passes tipped at the line and then a few plays later was picked off for a touchdown by Alan Ball. The two front runners for the starting position struggled to hit anything downfield and both seemed to lock in on Cecil Shorts III, which is understandable because he was constantly open and caught everything. It even got to the point where we joked they should pull Shorts off the field to make Gabbert and Henne throw to other players. The quarterbacks combined for three interceptions and collectively looked quite rusty.

"Some of the interceptions I think were missed assignments by receivers, but then there were times where we have to make good decisions. The decisions weren’t acceptable in our standards," Jaguars head coach Gus Bradley told the media afterwards. "Blaine and Chad both understand that. We’ve got to tighten those things up and I know some of those things are going to happen. We’re going to coach them up and try to eliminate them." 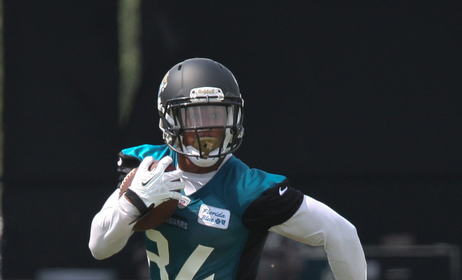 Jaguars wide receiver Cecil Shorts appears to clearly be the team's No. 1 receiver, picking up right where he left off in 2012.

The other quarterbacks in Matt Scott and Mike Kafka didn't get a ton of reps, but Scott looked fairly solid for most of practice, showing off his velocity with the football. He did have a couple passes sail high on him however, but footwork is a big thing he needs to work on.

The injured: Mark Asper was placed on the NFI list with a knee issue. Wide receiver Jeremy Ebert collided with corner Alan Ball in drills and whacked his head on the turf. He was down for a good minute or so, but walked off and sat out the rest of practice. Josh Evans came up lame late when he picked off a tipped ball, but it appears to have been just a cramp. Wide receiver Mohamed Massaquoi and Jamal Miles also left early with an injury.

Running back Maurice Jones-Drew appeared to be a full go at practice, catching the ball out of the backfield and running the ball in 11-v-11 drills.

"We have a plan for Maurice (Jones-Drew) and to see him make some cuts and go through the line and catch some balls in practice, he's right where we thought he would be," Bradley said. "We're going to continue to work him and monitor his reps, but we'll bring him along."

The depth chart: It appears the first team defensive line is going to be Jason Babin, Roy Miller, Sen'Derrick Marks, and Tyson Alualu on the early downs with Andre Branch and Jeremy Mincey coming on in pass rushing situations. One thing for sure is, the team now appears to have depth and versatility along their defensive line, bringing guys in and out. The pass rush would have had a couple sacks in a live game environment, but you can grab the quarterback in training camp. 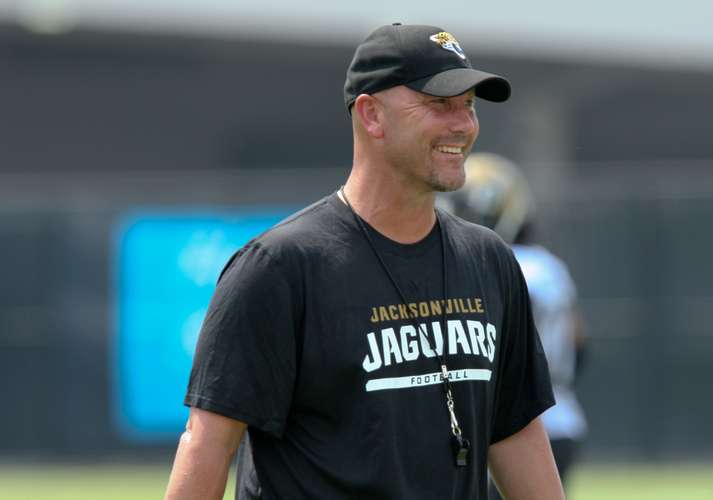 Hank Jones weighs in on the first day of training camp, including who impressed him early on.

The standouts: Cecil Shorts was simply uncoverable on Friday. He smooth routes, got open rather easily, and caught everything he could get his hands on. On the defensive side of the ball Dwayne Gratz seemed to handle himself well on the outside, running stride for stride with a couple of receivers on plays down the football field. Rookie Ace Sanders also showed his skills as a wide receiver, outside of just simply being fast. He ran some nice routes and did a good job helping out his quarterbacks and catching the football.

Honorable mentions: Second-year corner Mike Harris appears he's going to make a case for playing time over veteran Marcus Trufant at the nickel position. Harris made a handful of plays on Friday, including a pick-6 in 11-v-11 drills, undercutting a pass from Gabbert.

Pannel Egboh made a few nice plays from the five-technique defensive end spot, including swatting down a Chad Henne pass. Running back Jusin Forsett also had a few eye-catching runs, showing some good change of direction ability and burst. A zone-blocking scheme should do him well.

Denard Robinson still struggles catching the football consistently, which shouldn't be a big surprise, but when he has the ball in his hands he's dangerous. I still expect him to carry the football more than he catches it.