JACKSONVILLE -- The Jacksonville Jaguars stepped on the practice field on Sunday morning in shells and shorts in a practice that saw the first contact of the offseason. It was by far the coolest day, temperature wise, with even some raindrops on the afternoon.

The offense through the first two days of camp struggled to do much of anything, but on the third day the pace picked up a bit for the offense and they performed much better in team drills.

The talk: The talk of the day centered around the improved play of the quarterbacks, especially that of Blaine Gabbert. Through the first two days of camp Gabbert struggled mightily, but on the third day he improved quite a bit. Gabbert started slow in individual drills, but in 11-v-11 he hit on some key passes, especially down the field. Gabbert came on late in practice, hitting Mike Brown deep down the sideline on a perfect strike, hitting the receiver in stride to pick up a big gain. Following up a day where he had a number of botched snaps and a few interceptions, he had neither.

Henne followed up his practice on Friday starting well, but faded late in the practice. Henne was the victim of a few drops, but he was also bailed out on a few long completions. A notable one was a duck he threw down the middle of the field that saw Cecil Shorts III slow down and coming back to make a play on the ball and haul in the catch. Not to say Henne was bad, but both quarterbacks were up and down, but more up than the past two days.

The injured: Rookie receiver Tobais Palmer turned his ankle late in practice and safety Steven Terrell has an "arch" sprain. Linebacker Brandon Marshall was also off to the side getting looked at, but I haven't seen an update on his status as of yet.

Maurice Jones-Drew, Brad Meester, Jason Babin, and Roy Miller all had "veteran days off" and watched practice from the sideline and offensive tackle Mark Asper was taken off the NFI list, was in pads and practicing.

Jaguars head coach Gus Bradley said after practice the plan was to evaluate safety Johnathan Cyprien on Tuesday's day off, with the hopes he can return to practice on Wednesday.

The depth chart: Defensive end Tyson Alualu continues to get reps with the first team at the five-technique and has looked good doing so. In run drills Alualu dominated each of his snaps, throwing down a tight end and splitting a double team on one of the snaps. In 11-v-11 drills he ducked and took a knee so the quarterback could throw the football, but would have easily had a sack in live games.

"It’s always good. I don’t get too concerned about that with our team. I know those things can happen but you also know what needs to be done. -Gus Bradley on fights

Wide receiver Mike Brown has really stood out the past few days and has seemed to taken snaps from veteran Jordan Shipley, often lining up in the slot with the first team offense. He's not the biggest or the fastest, but he's running good routes and catching the football.

The standouts: Denard Robinson stood out in both a good and bad way in Sunday's practice. On one hand in 11-v-11 drills Robinson took a delayed draw 20 yards down field that likely would have been an easy touchdown, but then later on he couldn't secure the football. Robinson took one snap at "quarterback" on a speed-option play, but it was blown up at the line of scrimmage by linebacker Paul Posluszny, which also caused Robinson to fumble the ball. Later on in drills Robinson flat out dropped a short pass that could have netted good yardage if he completed the catch. Head coach Gus Bradley noted it's something the team is stressing daily with Robinson and he stays late and shows up early in practice to work on catching the football.

Rookie LEO-end Paul Hazel made his presence felt in one-on-one pass rushing drills, whipping Mark Asper on back to back plays. The first play Hazel put Asper on skates and wound up pushing him to the ground, a "flapjack" as we've deemed a defensive pancake. He was also able to bull rush another offensive tackle and get them off balance, as well as beating another off the edge. Hazel is a bit light in the pants, but he's an interesting long-term project to work on as a pass rusher.

Dwayne Gratz again had another good day of practice, showing out well in pass coverage and nearly picking off Gabbert in 7-on-7 drills.

Honorable mentions: While much of the quarterback focus has been on Gabbert and Henne, undrafted rookie Matt Scott has done solid work in the few team reps he's gotten. He had a nice touchdown pass down the sideline to Tobais Palmer in practice and few other short passes in drills.

Michael Brewster had a rough day filling in for Brad Meester, getting beat up in pass rushing drills by T.J. Barnes in back-to-back plays. At one point in inside run team drills, offensive line coach George Yarno yanked Brewster out of the drill screaming a few expletives followed by a "Know what you're doing!". 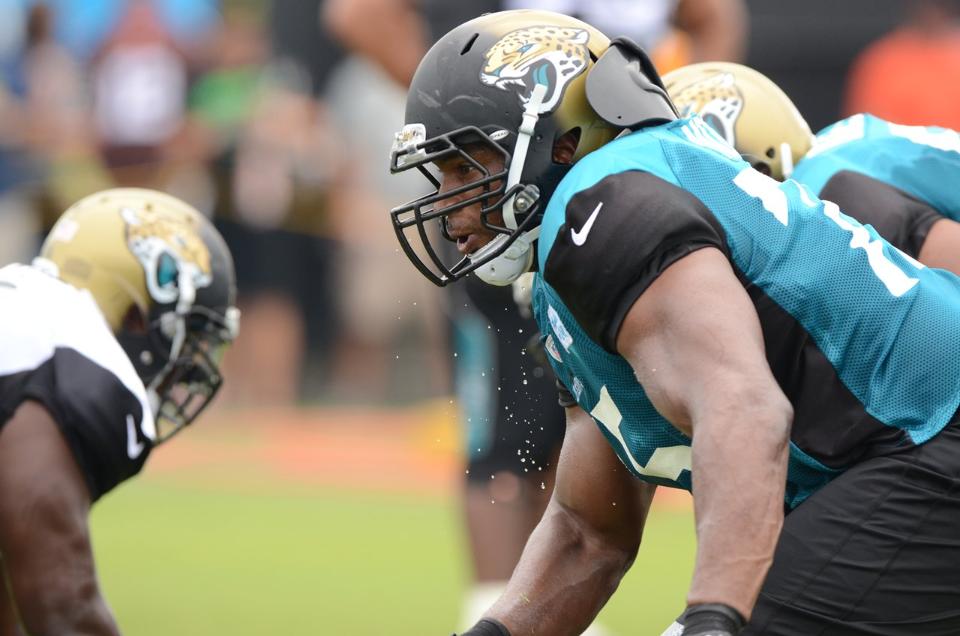 One-on-one pass rushing stats: In the first real look at pass rushing with pads on, a few players were able to win all their reps, including both of the Jaguars offensive tackles. Eugene Monroe stoned Andre Branch in back to back plays while Luke Joeckel dominated the player he went against, who's name escapes me right now.

The two "wow" plays of the pass rushing drills were Hazel bowling over Mark Asper and Tyson Alualu whipping Rackley with an inside spin move.

"I think when you look at him you wonder in his conditioning how is he going to be able to handle three hundred and sixty pounds and play. I think it’s all in the conditioning tests and just watching him and saying he’s pretty good for how big he is. He carries it pretty well and I know his body fat dropped and his weight dropped some. I think if he gets more comfortable to the tempo, but down here in pass rush is a good illustration."