JACKSONVILLE -- Defensive lineman Tyson Alualu has been the target of a lot of fan anger, not necessarily his fault, but entering the 2013 season in a new defensive scheme and in a new position, he has a good chance to get back on the fan's good side.

Originally drafted out of California as a defensive tackle with the tenth overall pick, Alualu made the move from 3-4 defensive end to 4-3 defensive tackle with the idea he'd be a pass rusher from the interior. Alualu hurt his knee early in training camp, irresponsibly being put in the Oklahoma Drill on the first day he arrived, which eventually led to microfracture surgery in his knee.

Fast forward to 2013 and the new coaching staff has decided to move him back to defensive end, playing the five-technique, rather than stick with him at defensive tackle. Gus Bradley and defensive line coach Todd Wash have some experience in this area, kicking Seattle Seahawks defensive lineman Red Bryant to the outside and kind of salvaging his NFL career.

"I hate it," Alualu told me jokingly after practice on Monday when I asked him how he liked the position switch. "Nah, I love it." 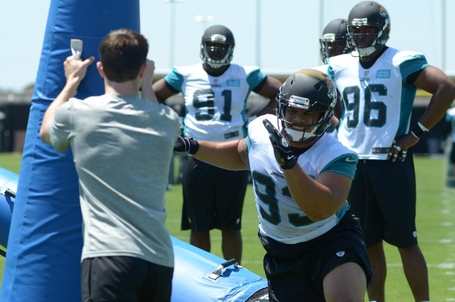 Through the first four days of training camp, Alualu looks like a reenergized player at the defensive end position. When the pads went on for the first time on Sunday, Alualu's presence began to be felt on the defensive line. In run stopping drills he regularly split the double-team he was facing with the right tackle and tight end, albeit typically not against Marcedes Lewis and Luke Joeckel together.

Alualu also showed well in pass rushing drills from the interior, making third-year offensive guard Will Rackley look silly on a spin move. He'd have had him beat badly two times in a row with the same move, but he slipped on the second attempt and Rackley put him to the ground.

"Very similar to what I was doing in college so just gotta get back to it, gotta get used to playing it," Alualu said. "But, so far I'm liking it."

Alualu isn't satisfied with just playing the strong side end position however, as he's still working on being able to bring some pass rush from the defensive tackle position and giving the team even more versatility on the defensive line.

"I'm a defensive end trying to stop the run on first and second down. But, I'm trying to earn a spot inside to rush the passer on third down," Alualu said. "That's the plan and I'm working hard at it."

The Jaguars defensive line will potentially have three "new" starters on opening day, including Alualu at the defensive end position, as he's been soaking up snaps with the first team defense.