The Jaguars defense struggled against the Jets offense, but there were some positive signs for the team.

The Jacksonville Jaguars dropped their second consecutive preseason game on Saturday night with a 37-13 loss to the New York Jets; however, there were plenty of positive signs for fans to hang their hat on. 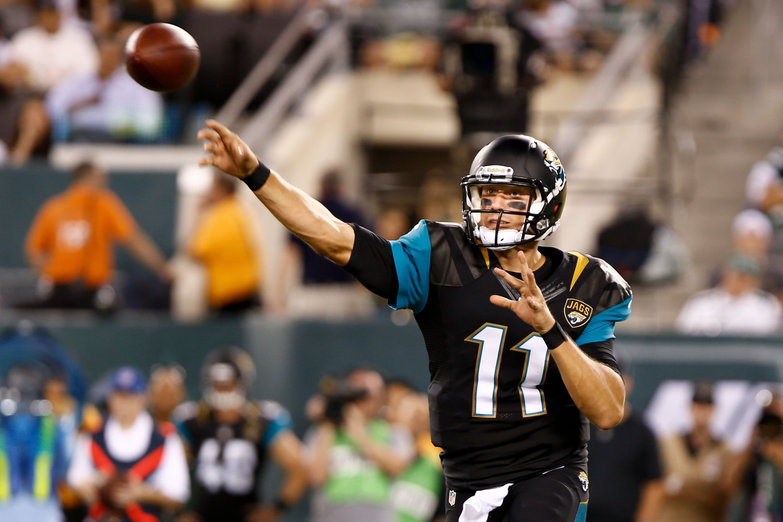 Gabbert's hand collided with the helmet of a Jets pass rusher.

Particularly, the first-team offense of the Jaguars, led by third-year quarterback Blaine Gabbert, had plenty of success against the Jets defense. Gabbert, who left the game with an injury to his throwing hand, completed 13-of-16 passes on the night for 165 yards and a touchdown, including 4-of-4 passes on the team's opening offensive drive.

Unfortunately for the Jaguars, when Gabbert left, so too did the team's offensive production as both Chad Henne, Matt Scott and Mike Kafka struggled in the remainder of the game. Henne completed 4-of-10 passes for 30 yards with an interception, while Scott was unable to complete any of his four pass attempts and Kafka finished with negative passing yardage.

Even worse than the Jaguars backup quarterbacks though, was the defense that couldn't do much of anything against Mark Sanchez and the Jets. While Marcus Trufant managed to record an interception against the Jets starter to prevent a touchdown, the opposing team drove down the field at will and talented rookies like Johnathan Cyprien and LaRoy Reynolds looked like they still have some maturing to do as players.

The Jaguars will next face the Philadelphia Eagles on Saturday, Aug. 24 at EverBank Field.