JACKSONVILLE, FL. -- The Jacksonville Jaguars entered their final practice before the team's annual intra-squad scrimmage on Friday morning to clear skies and the sun beating down in half pads. The team was looking to follow up what most ranked as a poor, uneventful practice on Thursday with a better day on Friday and I think they accomplished that.

The quarterbacks: Until the Jaguars decide on a starting quarterback, the position is going to be the most talked about portion of training camp and the preseason. Blaine Gabbert was once again out on the field doing individual and some team work, but was still held out of portions of 11-on-11 drills as a precautionary measure.

"Yeah, we’ve got some work to do on it. We completed nine in a row and then when we went down the red zone and the defense did well. When you’re making progress that’s what happens." -Gus Bradley on the quarterbacks

"Yeah, he (Gabbert) is still held back," head coach Gus Bradley said after practice. "It’s a three out of four reps-type deal. He’s not getting all of them but enough."

Gabbert had one of his better days, I thought, but still had some of those head scratching incompletions that you don't like to see. He had a nice touchdown pass to Ace Sanders in one drill, but then would just completely whiff on a guy a few plays later. Early on in team drills Gabbert was able to move the chains a few times with the second team after Chad Henne came off with a three-and-out with the first team.

Chad Henne still took the bulk of the snaps with Gabbert being held out, but again he still failed to put his foot forward in the quarterback competition as no one has yet to really stand out on their own. During one sequence of plays Henne had an near pick, a nice completion, another near pick, and then would have had his receiver killed over the middle for a minimal gain. Later on on the day Henne had a ball batted at the line, a nice completion down the seam, but ended on a fumbled snap.

Mike Kafka and Matt Scott saw their reps go up with Gabbert out as well and I thought Scott had a nice end to the practice. He hit on a couple of throws then picked up a big chunk of yardage with his feet towards the end of practice.

The injured: Jeremy Mincey was mysteriously not at practice on Friday and no one seemed to know why on the sideline, but Gus Bradley informed the media afterwards that he had suffered a "head contusion" in Thursday's practice and was being held out and evaluated.

Justin Forsett was still out with a walking boot, due to his toe injury, and Bradley isn't sure if he will play in the scrimmage on Saturday, but insists the injury isn't a concern. Lionel Smith also sat out with a quad strain while Brad Meester, Eugene Monroe, Jason Babin, Tyson Alualu, Paul Posluszny, and Roy Miller got veteran days off. Alualu being off has nothing to do with his knee, which has bothered him for the past three seasons.

Reynolds will do what it takes 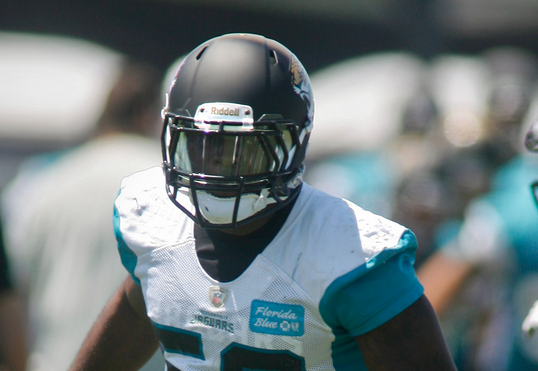 The undrafted rookie will likely have to contribute in areas of the game other than just linebacker to make the final 53-man roster.

Justin Blackmon and Jonathan Cyprien both still remain on the PUP list.

The standouts: Rookie linebacker LaRoy Reynolds has caught my eye in nearly every practice, especially when the pads went on. On Wednesday he stuffed a wildcat play up the middle for no gain and on Friday he made some more plays, including nearly picking off Chad Henne in 7-on-7 drills, breaking up another pass later on.

Sen'Derrick Marks has had a great camp so far and continued that on Friday by making it difficult on the quarterbacks. In team drills Marks tipped a Henne pass at the line and continues to be disruptive on the inside.

WIth Eugene Monroe out, Luke Joeckel soaked up the reps at left tackle and looked like a natural at the position. Offensive coordinator Jedd Fisch got a little creative with Joeckel as well, being a former tight end, as he lined him out wide in a trips formation (three receivers bunched on one side of the field) and ran a quarterback draw out of it, followed up by a wide receiver screen in the same formation.

Fisch also continues to mix up the formations the offense is using with a heavy dash of wildcat from Denard Robinson mixed in, and a variety of ways the team can get players involved.

The standouts, in a bad way: With Brad Meester having a veteran's day off, it meant that Michael Brewster was the first team center with Jason Spitz as his backup. Spitz struggled on Thursday in both protection and with snapping the football, with a few bad shotgun snaps and a fumbled exchange with the quarterback under center.

For me Andre Branch just has not showed up at all at camp. He hasn't generated much of a pass rush in team drills or in one-on-one pass rushing drills. Branch is often going against Luke Joeckel, but he still should at least show something as far as a pass rush by the fifth day in pads.

"I thought today was a classic example. We go into our blitz period and the offense did extremely well, and then we did kind of a specialty period and the offense did really well. Then we went down in the red zone and the defense had three stops in a row, and it’s gone back and forth like that. Defensively speaking I am seeing some of the things tighten up. You’re starting to see it. We talked initially we wanted to be an aggressive attacking defense with our style of play especially on the perimeters with our corners and it appears to me that our corners are getting a better idea and our safeties a better idea how to work. Offensively, yesterday I know that they had a day that they wanted to really bounce back from, and to see those two periods like I did there was really effort. I thought the protection was good just sitting back there and time the quarterback, had so we’re progressing."

Gus Bradley on his team after a week.