Blaine Gabbert won't cause a knee-jerk reaction from Jaguars

The Jaguars have decided on Blaine Gabbert as their starting quarterback, and nothing will change that for the 2013 season.

Share All sharing options for: Blaine Gabbert won't cause a knee-jerk reaction from Jaguars

The Jacksonville Jaguars announced on Monday that third-year quarterback Blaine Gabbert would be their starter for the 2013 season, granted he's healthy, against the Kansas City Chiefs on Week 1. Unfortunately the team also announced that Gabbert would miss the rest of the preseason with a thumb injury on his right hand, which has already lead some discussions of doubt in Gabbert as the starter if backup Chad Henne plays well the next two games.

"I think if we didn’t go through this whole process there may be some of that," Bradley told the media when he was asked if anything Henne did during the preseason could change his decision. "But because right from the start we started this and the reason why we took this length of time is so that we would have some conviction and to stay strong."

Nothing Chad Henne does is going to change the Jaguars decision on their starting quarterback however, and barring just utter ineptitude by Gabbert, don't expect the team to make a switch at the position this season.

"My hope is to stay really patient with him and I think we can help him be strong in finding out what his strengths are and then putting him in those positions. I’m not a knee-jerk reaction type person and I hope that I don’t go to that," Jaguars head coach Gus Bradley said at his Monday morning press conference, where he named Gabbert the starter.

"That’s why we could have named a quarterback, tried to name one earlier, but in my mind I wanted to make sure when we did it it was a time when we have strong conviction," Bradley said. "So for me my hope is to have a strong conviction throughout and that he plays through the whole season and gets better and better as each game goes on."

There are some who think that Gabbert could be on a short leash and get the yank early in the season, but the reality of the situation is the new Jaguars regime wants to get a real evaluation of Blaine Gabbert and in order to do that he has to play virtually the entire season.

Bradley has seen patience in a young guy pay off during his time in Seattle, as the team started third-round rookie Russell Wilson, knowing there would be some growing pains and would need to be patient.

"The Seattle opportunity for me was really good to see that take place," Bradley said. "Because I know initially Russell (Wilson) as the quarterback in the first couple of games had to go through some learning and some growing and that conviction was in place.

"I think it was really good for me to see how that entire process took place and the conviction and the support you need."

The decision wasn't a knee-jerk reaction 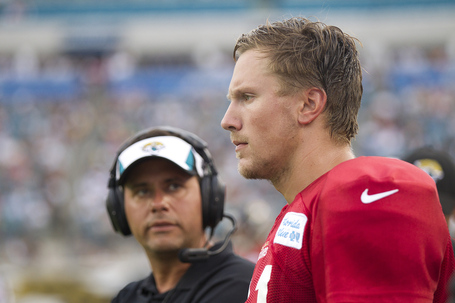 The process wasn't a decision made after the second preseason game, where Gabbert looked arguably the best he's ever looked, either. It's been a long process that has included practice, film work, meeting work, how the players carry themselves and lead, as well as the performance in the preseason.

The Jaguars coaching staff feels they've been able to identify what Gabbert does well and will build upon that rather than trying to force him into plays and situations where he's not going to be successful. That's a start difference from the coaching staffs of the past, as when this staff says they are going to put players in spots where they can concede, they mean it.

"He can stretch the field physically with his talents and when we say stretch the field it’s not just vertically, it’s also horizontally throwing across the field," Bradley said when asked about Gabbert's strengths. "That showed up physically. He has taken ownership with the offense as far as understanding it."

Those traits showed up on Saturday evening against the Jets, as the Jaguars ran an up-tempo offense that started with a shot down the seam to rookie Ace Sanders, then saw Gabbert quickly get the ball out of his hand to his receivers, allowing them to make plays, similar to what he was doing in college at Missouri.

"It’s still a process for our guys as we pare things down but to this point he has pretty good command of the offense," Bradley continued. "I think his athleticism, we want to do more movement-type passes and with his athleticism I think will play into his hands. And he has command on what we’re looking to get done."

We saw more roll out passes and Gabbert moving the pocket on Saturday than we probably did his first two seasons in the NFL and it appears as if it's going to be a staple for Jedd Fisch going forward with Gabbert. As Bradley mentioned, he's familiar being on the move, because he was a lot in college, and seemed comfortable throwing on roll outs.

While undoubtedly there will be talk of Chad Henne starting if he plays well against the Philadelphia Eagles on Saturday, it will be nothing but hot air. The Jaguars aren't going to change their minds anytime soon and barring injury I would expect Gabbert to be the starter essentially the entire 2013 season.

The Jaguars will have to make a decision on the future of the position after this year, so they're going to want to see as much of Blaine Gabbert as they can.