Eagles vs. Jaguars 2013: Players with most to lose

A few well-known players could be in danger of getting cut if they aren't able to perform against the Eagles on Saturday.

Share All sharing options for: Eagles vs. Jaguars 2013: Players with most to lose

Just as there are players with a chance to prove themselves in the preseason, there are also players that have no choice but to prove themselves or face the reality that their time with the Jaguars could end soon. On Saturday, a few players could be in the position of losing a lot if they aren't able to perform against the Philadelphia Eagles:

Mike Brewster - Once thought, and perhaps still thought by some, as the future center of the Jaguars, Brewster has struggled in preseason. The starting spot at center seems securely in the hands of 36-year old veteran Brad Meester, but Brewster could be in danger of not making the roster if he can't turn around his performance.

That's not to say that the Jaguars have any player on the roster that would make for a solid back-up center instead, but with the worst pass blocking grade on the team through two games via Pro Football Focus the question is whether or not the Jaguars could do any worse?

Could Andre Branch get cut? 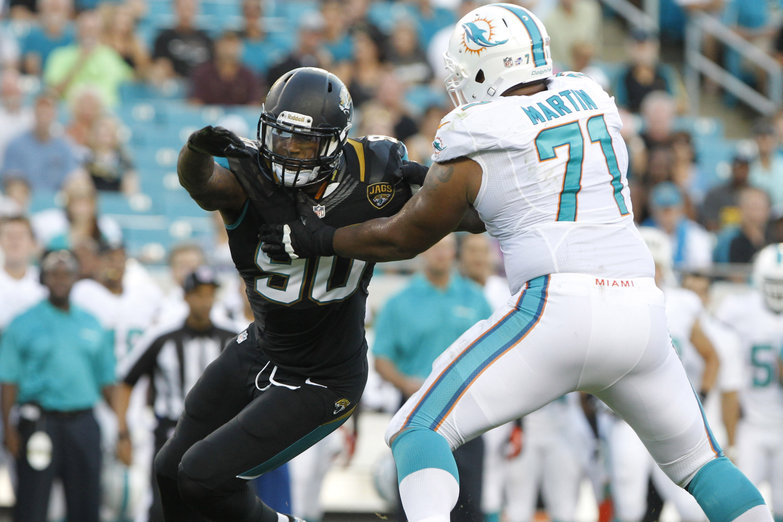 Jaguars second-year defensive end Andre Branch was supposed to be a perfect fit at the LEO, but right now he's shooting blanks.

Andre Branch - A second-round selection in the 2012 NFL Draft, Branch was a big investment for the Jaguars and that usually means a player can stick around for a while. However, Branch was not Dave Caldwell's investment and his performance in preseason hasn't inspired much hope for a turn around.

His inability to bend doesn't bode well for his chances at success at the LEO position, but if he can show some pass rushing ability on Saturday it could save his spot on the roster.

Jeremy Mincey - The veteran defensive end has one sack in the preseason, which is impressive considering he's only participated in 12 plays. Other than the sack though, Mincey has been unimpressive in his limited play.

That's not entirely his fault considering he's somewhat of a square peg trying to fit in a round hole that is the new Jaguars defensive scheme. Healthy and ready for Saturday, Mincey could be in danger of being a bigger name cut at the preseason if he isn't able to perform well.

Eagles vs. Jaguars 2013: Everything you need to know