NFL roster cuts: Jaguars have a battle at defensive end

The Jacksonville Jaguars will have some tough decisions to make at the defensive end position in final cuts.

Share All sharing options for: NFL roster cuts: Jaguars have a battle at defensive end

The Jacksonville Jaguars made their first round of cuts on Sunday, cutting two defensive ends in Paul Hazel and J.D. Griggs, thinning out the possibility for the final roster. There are going to be some interesting cuts, or trades if possible, to finish out the rest of the position group.

It also muddies it up a bit that the defensive end positions on the Jaguars are essentially two different positions. So, let's handicap chances to make the roster by looking at their chance to get cut. 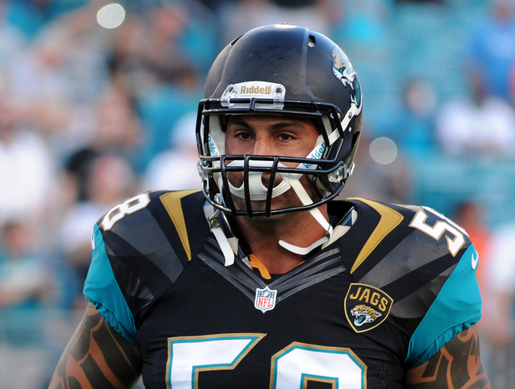 Is the competition for roster spots at the LEO position over as of Sunday?

Jason Babin - 10 percent chance to cut: Babin is, I think, a lock for the final roster. He hasn't been great in the preseason so far, but he's at least able to bring pressure from the edge and be disruptive in the backfield. I don't want to say Babin has zero percent chance to get cut, because he carriers a decent chunk in salary, but at this point there's no real reason to dump it.

Andre Branch - 40 percent chance to cut/trade: Branch has been the focus of a lot of fans ire, but not undeservedly. He finally picked up a sack on Saturday, but it was a free shot on the quarterback because he was unblocked rather than something he produced. If Branch were straight up released, he'd carry $2.2 million in dead money, so it's more likely he's traded for whatever the team can get if they want to move on. I would imagine he gets a long look on Thursday, because he's essentially done nothing all preseason.

Ryan Davis - 70 percent chance to cut: Davis has been OK overall at the LEO end and has even bled into Branch's snaps at the position in games and practice, but it's still unlikely he makes the final roster. If the Jaguars decide to keep Branch he's most certainly gone with a shot to be brought back on the practice squad. Davis had a poor day of work against the Eagles however, so he will really need to show up against the Atlanta Falcons on Thursday.

Tyson Alualu - 0 percent chance to cut: Alualu appears to be intrenched at the five-technique spot on the starting defense. He'll be in that role on first, second and obvious run downs. He hasn't done much rushing from the three-technique on the inside, but that's still an option going forward for him. I don't think there's any chance he's not on the roster or not starting on opening day.

Pannell Egboh - 30 percent chance to cut: The Jaguars picked up Egboh after a try-out weekend at minicamp and he continues to make that look like a smart decision. All through training camp he flashed and was disruptive which has carried over to the preseason. He's been the primary replacement for Alualu on the field.

Jeremy Mincey - 30 percent chance to cut/trade: Mincey has been an odd fit in the new defensive scheme, but in the last two games he might have found his niche. During training camp he didn't make much of an impact, but the past two weeks he's done a good job getting in the backfield from the five-technique and the three-technique on passing downs. He would carry $6 million in dead money if he's released, but he'd also be a $3.5 million rotational player if he's kept on the final roster.