The final preseason game is where a lot of bubble players make their case for the final roster, so who needs a good game for the Jaguars?

The Jacksonville Jaguars have a few players who's status on the final roster is tenuous at best, so the final preseason game against the Atlanta Falcons is of the upmost importance. Fringe roster players will get the most snaps in the final game they've gotten during the preseason, so it's their best chance to make the roster. 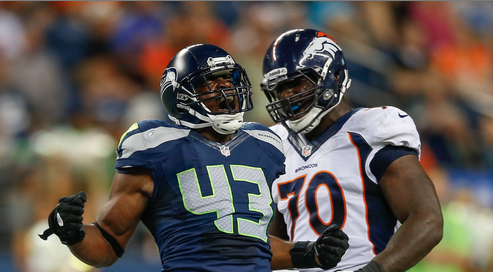 Lost in the fray of the Jacksonville Jaguars claiming Ricky Stanzi off waivers, the team also claimed linebacker Kyle Knox who was released by the Seattle Seahawks. Knox joined the Seahawks in 2012 as an undrafted free agent, so head coach Gus Bradley is rather familiar with him.

Five Players On The Bubble:

Andre Branch: The second-round pick from 2012 has been a massive disappointment during the preseason so far with his only play coming on a free shot at the quarterback against the Eagles. While it's unlikely the Jaguars straight up release Branch, his spot on the roster isn't guaranteed. It's possible he's offered up to other teams for anything they can get, but another poor showing on Thursday could push the Jaguars to make a move.

Michael Brewster: Like Branch, Brewster has been a massive disappointment through training camp and the preseason. Thought to have gotten bigger and stronger during the offseason to be the Jaguars primary interior backup, Brewster has struggled mightily in games. Brewster is the lowest graded Jaguars player according to Pro Football Focus, including giving up the most pressures on the offensive line.

Matt Scott: The top two quarterbacks on the Jaguars roster are set, especially with Blaine Gabbert being injured and still questionable for Week 1, but the third quarterback spot can still be decided. The team has gone back and forth with Scott and Mike Kafka, but really neither of them have been any good in the preseason so far. Scott figures to get plenty of reps against the Falcons so with a good showing he might shoehorn himself on the roster.

Kevin Rutland: The Jaguars corner position is an interesting one to shake out, but with the signing of Will Blackmon on Wednesday it's possible a guy like Kevin Rutland will be on the bubble. The team likes Demetrius McCray, who plays the same outside role as Rutland, so a poor showing could have him on the outs.

T.J. Barnes: The Jaguars defensive tackle rotation seems like one of the easiest to pick, but another good showing by Barnes could force the Jaguars to think long and hard about hanging on to him. He's one of those "Planet Earth" theory players and he's seemed to improve each week as the one-technique. He struggled in college with his footwork and not utilizing his leverage, but defensive line coach Todd Wash has been helping him with his fundamentals and it's paying off.

Jaguars vs. Falcons 2013: The final countdown