Jedd Fisch busting out Emory and Henry formation, other wrinkles in Jaguars offense

Share All sharing options for: Jedd Fisch busting out Emory and Henry formation, other wrinkles in Jaguars offense

The Jacksonville Jaguars haven't had an explosive or even consistent offense since the 2010 season, and even then it was very up and down. Much of the blame has been laid at the feet of the slew of offensive coordinators who came under Jack Del Rio, but coordinators like Dirk Koetter did just fine at their next stop running an offense with talent. 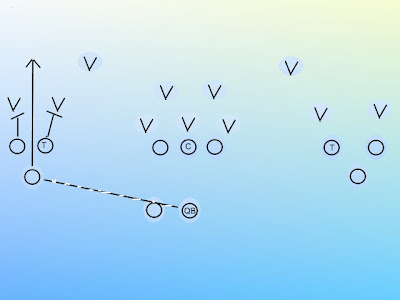 The Jaguars hired Jedd Fisch this offseason, who spent last year as the offensive coordinator for the Miami Hurricanes. Fisch has brought some of the "creativity" that Jaguars fans have wished for through the first week of training camp. To the delight of many watching practice on Friday, the Jaguars busted out the "Emory and Henry" formation.

The formation, made famous by Fisch's old boss Steve Spurrier, splits ineligible offensive tackles out wide with wide receivers, leaving just three down offensive lineman. The variation Fisch used during Jaguars practice had just Luke Joeckel lined up on the line of scrimmage in "trips". The idea behind the formation is to run a play based on how the defense adjusts to the odd look.

If the defense moves lineman or linebackers out with the offensive lineman, the offense can run a draw play with the running back or a quarterback keeper, which is what Fisch did the first time the team lined up in the formation. The other option the offense has if the defense does not adjust to the formation is a quick pass to the receiver off the line of scrimmage in the trips set for a screen, giving the receiver an offensive lineman to block for him against corners and safeties.

It's just been one of the many things Fisch has done differently through the course of training camp, as he seems eager to try things out and put players in the best position to make a play. He's busted out things like a quick backwards pass to wide receiver Mike Brown, who played quarterback in college, and letting him throw the ball deep to a running back sneaking out of the backfield. Not to mention the variety of plays from the Denard Robinson wildcat package.

The Jaguars might not be a "good team" in 2013, but it appears their offense might actually be fun to watch for the first time in a few years.