Ace and I: A Prophecy Foretold

What would you say if I told you I was the precursor to Ace Sanders' selection by the Jaguars in April? That I am the reason he is here today? Thanks might just be in order, nephews.

Share All sharing options for: Ace and I: A Prophecy Foretold

You might call me a prophet, or you might just call me lucky. Either way, Ace Sanders and I, that's right, The Colonel and myself, are connected.

To begin, a quick and important disclaimer: In the South Carolina student section, we referred to Ace as "The Colonel" because of the great Colonel Sanders. Thus, I will refer to him as such in this, and likely in future articles. I suggest you do it too. It's fun. It's like "Shoelace" or "Weapon X" or "Blame Gabbert" except it's "The Colonel". Got it? Great. Now moving on.

Before I can tell you all about our connection and how it was fostered, let me say right now that were it not for me, it's quite possible that Ace Sanders - the Ace Sanders you have all come to know and love, The Colonel himself - might be running around for another team were it not for a special day this spring.

The time has come for me to share my tale with you all, my nephews and Jaguar brethren. A tale of fate.

I awoke to the same thing I did every morning this school year at the University of South Carolina: to the sound of a generic iPhone alarm blaring through my Bose Noise Cancelling Headphones after a below average night of sleep battling the sound of my roommate snoring like 30 lumberjacks revving their chainsaws in the Boreal Forest. But while he and his deviated septum would lie there snoring long past noon, I would make today a productive day. Not only for myself, but for my fellow Jaguar fans.

Normally I would rise to make the trek across campus to my early morning psychology class on Tuesdays and Thursdays. But not this day. No. This day would be different - for today was the annual South Carolina Pro Day. And after donning my Jaguars sweatshirt and teal 5950 flat-billed hat, that is exactly where I would be heading.

After a morning of timing 40's, observing players, and talking to Gamecocks of old on the field, I settled outside the south endzone stands at the conclusion of player workouts. A few of the players walked out to their cars while, DeVonte Holloman, Devin Taylor, Byron Jerideau and former Gamecocks Alshon Jeffery, Melvin Ingram, and Jasper Brinkley talked amongst each other.

Like the card after which he is nicknamed brandished from beneath the deck while holding two fives in a blackjack hand (that makes 21 y'all - a perfect hand), Ace was there.

I approached him as a fellow student - I had seen him a few times around campus before and he seemed like a sociable guy. He was, of course. He's The Colonel after all.

I asked him how he thought he performed, to which he replied, "could've gone better, but pretty good." Genius. Such a Colonel-esque response. Humble. Thought out.

And that's when I said it. The words that would seal us together forever, "Right on man. Well, I'll be seeing you in Jacksonville this fall then."

"Haha maybe man, maybe," he replied. "That'd be cool though."

Suddenly, the skies went dark, lightning struck, and thunder clapped from the heavens (in a metaphorical sort of way).

It had been foretold. Ace would be coming to Jacksonville. 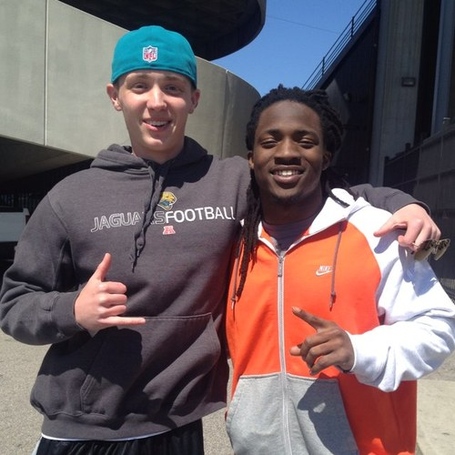 Photographic proof that Ace Sanders and I were together that day, Jaguars gear in plain sight. via si0.twimg.com

After a quick picture together, we went our separate ways. But not for long.

Almost exactly one month later, he would be selected by the Jacksonville Jaguars in the 4th round of the NFL Draft.

Whether that greater power was contained that day far away in the mere sound of Uncle Chaps munching on an ice cream sandwich, the powdery cocaine residue falling from the nostrils of Matt Jones, the breeze of a Derrick Harvey roundhouse kick, or simply the great Mr. Khan himself watching over me, I will never know - but the end result is irrefutable.

The Colonel is here. In Duval. And here he will stay.

I'm all for giving Dave Caldwell credit where it is due, but I specifically recall him being in Southern California at the USC Pro Day that morning viewing Matt Barkley. Who was really the Jaguars representative in Columbia that day?

So let me ask you this: was it coincidence that I happened to be there that day? That Ace ended up going to our beloved Jacksonville Jaguars rather than any of the 31 other NFL teams? Or was it foreshadowing to a much bigger and brighter connection and future?

So you can thank me now in a brief comment, or you can thank me when you see me this year in Section 124 at Everbank Field (I'll be the guy in the Ace Sanders jersey, row N). Or maybe you'll just scoff at my story and report this article for spam.

Either way, you're welcome nephews - and the joke is on you, reporting articles for spam isn't a feature on BCC.

I love you all, and so does The Colonel. Go Jags.