Behind enemy lines: rooting for the Jacksonville Jaguars up north

There was a time when I thought rooting for the Jacksonville Jaguars, no matter the locale, would be fun, exciting and rewarding. I can't decide if I should laugh or weep at myself for ever thinking that.

Share All sharing options for: Behind enemy lines: rooting for the Jacksonville Jaguars up north

It's January of 2012 and I was packing up my stuff to move north. The great state of Connecticut was calling my name and I was ready to heed that call.

I thought things would be a piece of cake... My marriage? Check. My relationships with Florida friends? Check. My unwavering support for my Jacksonville Jaguars? Double check.

Case in point... eight months into my Connecticut venture, I was pumped that the very first game my Jaguars would play would be against the New York Football Giants. "Yes," I thought to myself, "I'm gonna get to go to the bar and watch this game!"

I should've stayed home and washed down my naivety with a pint of Blue Point Summer Ale.

Instead, I donned my old-school Fred Taylor jersey, walked into my neighborhood pub (a place that branded itself as a "family establishment" mind you) and was greeted with a hearty round of jeers that included "GO HOME" and "Jag-WADS!" Oh, and lest we forget the all-purpose "F***ING LOSER!" that echoed off the composite wood wall I found myself wishing I could sink into. (One young man called me the c-word, but this is a family blog so I won't go there...)

This was the debut preseason game and these guys were throwing insults and roasted peanuts at me like I had cut off a horse's head or something.

I sat there, as my Jaguars came from behind to win by a single point. Needless to say, instead of paying my bill as soon as I could and making a silent retreat, I put my feet up on the chair next to me and just started yelling (to no one in particular) "DUUUUUUUVAAAAAALLLLL!"

As the Giants fans passed, several laughed, a few stared and one promised to kill me if he ever saw me on the streets. 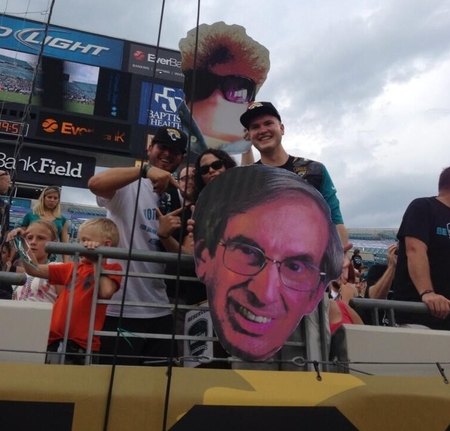 These people would have never laughed at me.

In the weeks that followed, I watched my Jaguars struggle through the rest of the preseason. As the regular season opened, I didn't know just how much of a dumpster fire we'd all be in for. I think it was the Bears game in Week 5 that tipped me off, but in all honesty, last season is a blur of blown coverages, Mike Mularkey meltdowns and Chad Henne mustache GIFs.

But I kept going to the bars, I kept asking them to turn on the Jaguars game (even though they'd always, always laugh) and I kept shrugging off the haters.

I believe that faith comes when something is put under serious trial... when expectations aren't met, when one or the other falls short. Faith tells you that things will get better... that they have to.

Last season was a dumpster fire and it didn't get that way overnight -- it started in the first few weeks of the season and roared on into the winter. But like the biblical characters of Shadrach, Meshach, and Abednego, I walked into that fire with faith knowing full well I'd be fine. That we'd all be fine.

On Friday, we'll have come completely out of the dumpster fire that was the 2012 season. We'll have the covering of Khan and Bradley and Caldwell and a host of fresh faces who are excited to be a part of this newly energized franchise.

And I'll be in New York with at least one nephew from Duval, earning a chuckle from the bartender because we asked him to put on the Jaguars game.