Playing in a zone-read heavy system at South Carolina, wide receiver Ace Sanders was never fully utilized as a wide receiver in college. However, since arriving in Jacksonville, the former Gamecock has flourished as a receiver in Jedd Fisch's offense.

Jaguars 4th round pick, wide receiver Ace Sanders has been continuously noted as one of the team's most impressive players thus far in training camp. Known mostly for his punt returning during his career at South Carolina, Sanders has also been a dynamic underneath and even down-field receiving threat for the Jaguars under new offensive coordinator Jedd Fisch.

At South Carolina under Steve Spurrier, a coach that many associate with a pass-happy, statistic-generating offense from his days at University of Florida, Sanders was certainly one of the key cogs in the South Carolina passing game.

That being said, a quick glance at the stat sheet will reveal a WR that put up mediocre statistics (36 catches for 439 yards). In fact, it was multi-sport athlete, basketball point guard-turned wide receiver Bruce Ellington, not Sanders, who led the team in receptions and receiving yards in 2012 for the Gamecocks.

But don't let that fool you.

First, it should be noted that the Steve Spurrier of most recent memory has changed his ways to a degree. Sure, the Ol' Ball Coach is always good for a few formation wrinkles and a bevy of shots down the field throughout the course of a game, but with Marcus Lattimore and Connor Shaw leading the Gamecocks offense in 2012 (and much of 2011 as well with former QB Stephen Garcia's continuous off the field issues), a change has been necessary.

Co-Offensive Coordinator - or "running-game" coordinator as we call him in Columbia as we all know who calls the shots in the passing game (Ol' Ball Coach) - Shawn Elliott is known for his zone-read packages and they fill the majority of the offensive playbook for the Gamecocks.

This is done for a couple of reasons. First, because Spurrier has struggled to recruit a QB to SC who is a good enough pure passer to consistently run his offenses of old; and secondly, because for the past 3 years, the Gamecocks have been graced with one of the best running backs in the country in Marcus Lattimore.

South Carolina takes nearly all their snaps from the shotgun, and runs the zone-read with Shaw and Lattimore more than any other play in the playbook on first and second down. This changed a bit down the stretch when Lattimore went down with his gruesome knee injury against Tennessee, but the point remains that the zone-read is the bread and butter of Spurrier and Elliott's current scheme. 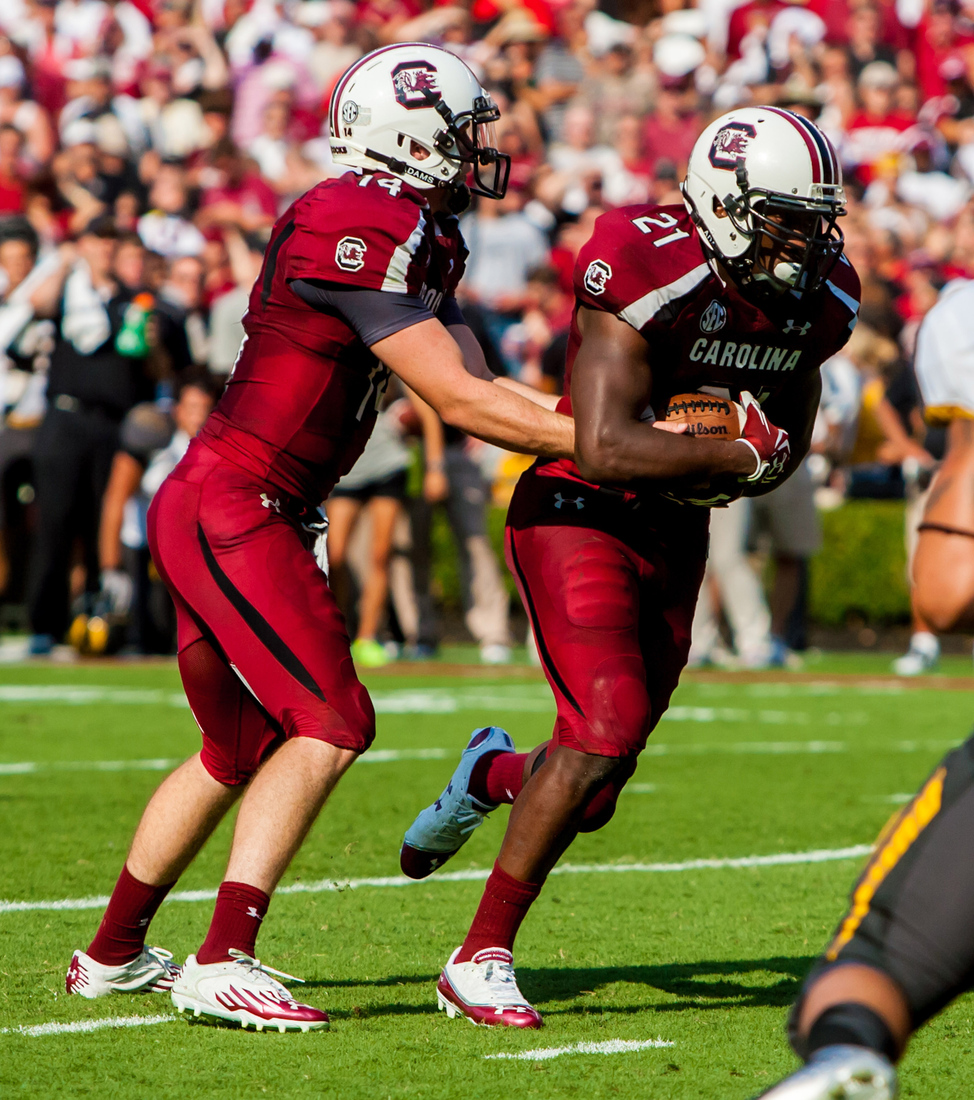 Thus, QB Connor Shaw throws the ball in spurts. In fact, prior to the Tennessee game in 2012, Shaw averaged just over 16 throws per game. A number far lower than what most QBs under Steve Spurrier are accustomed to. In turn, the South Carolina receivers had fewer balls thrown their way.

By comparison, Geno Smith averaged over 41 attempts in as many games for West Virginia in Dana Holgorsen's "Airraid" offense that saw ball after ball fed to now St. Louis Rams wide receiver and 6th overall pick, Tavon Austin - a player who Sanders has drawn comparisons to and even been called a "poor man's" version of.

But there is far more than meets the eye when looking at strictly what is on paper with Ace Sanders. Stats and 40 times do not tell his story.

Make no mistake, when things got tight for the Gamecocks in crucial, pass-only situations this year (IE the final drive of the Outback Bowl vs. Michigan or down the stretch against Clemson), it was the sure handed Sanders who was getting the ball. When South Carolina needed an offensive or special teams jolt, Ace was there. In space, you'd be hard pressed to find a more elusive wide out in the SEC.

So are the Tavon Austin "Lite" nicknames unjust?

Sanders was not given the luxury of the air raid offense. His QB didn't drop back 41 times per game. He received far fewer targets. Given space, one could argue he was every bit as elusive and has been just as impressive in training camp thus far since both have entered the NFL. I think it's fair to let them both stand alone.

Now Jaguars fans and people around the league are beginning to take notice of Sanders' performance. With Justin Blackmon sidelined during training camp and OTAs with a groin injury, it has been Ace who has seized the opportunity and dazzled in the process.

In Jacksonville, there will be no zone-read heavy system holding him back. In the NFL, QBs don't average 16 throws a game (even if it is Blaine Gabbert or Chad Henne taking the snaps). Ace is getting looks like he has never seen before, and the results have been spectacular thus far.

So is Jedd Fisch harboring a gold mine of untapped potential in Ace Sanders? It's certainly early and time will tell, but the future looks bright.

Keep an eye on "The Colonel" Sanders this season. For a 4th round pick, the Jaguars may have gotten far more than they bargained for.