Duval 'Til We Die: Reppin' the Jaguars in Ireland

American football is one of the fastest growing sports in Ireland. Notre Dame and Navy played their season opener in the Aviva Stadium (49,000 capacity) in Dublin last year and next year Penn State will take on UCF in Croke Park (82,000 capacity), also in Dublin. Years ago, however, there weren't any games and the only football the Emerald Isle saw was a highlights show on TV. But that didn't stop Stevie from falling in love.

Share All sharing options for: Duval 'Til We Die: Reppin' the Jaguars in Ireland

Like most fans overseas, Stevie had a dad who led his sons into becoming fans of American football.

"My Dad has always been a huge sports fan. He watches anything he can find on the television, from soccer and GAA (traditional Irish sports, look up hurling on YouTube!) to cricket. As a result I've always been surrounded by sport."

But one thing most European sports -- soccer, rugby, hurling, Gaelic football -- have in common is that they're free-flowing. There's not very much stoppage in play. Stevie said that when he started watching American football, rather than being turned off by them stopping every 20 seconds, he found it fascinating.

"I remember watching the NFL highlights program with my Dad when I was about 10. I thought the game was great and I enjoyed it more than soccer. I found the well defined 'offense vs defense' concepts incredibly appealing. Initially, I didn't support anyone in particular, rather I just watched the highlights program trying to absorb as much as possible."

"Then when I was 12, when the Jaguars and Panthers entered the league, I knew I was going to support one of them. I've always been drawn to the underdog, and I reasoned there was no greater underdog than the brand new team!"

So, how did Stevie choose between the Jaguars and Panthers? Pretty much the same way any 12-year-old would.

"Once I caught a glimpse of the Jaguars uniform with the cool full body cat on the sleeve I know Jacksonville was the team for me." 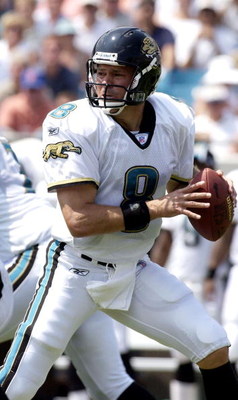 Yeah, those uniforms were pretty badass.

Stevie said that since then, he's kept up with the Jaguars, subscribing to NFL GamePass, which allows him to watch every game live. Irish pubs have also started showing American football games and even though he doesn't get chided for not liking soccer or rugby...

"I do get some teasing for being a Jaguars fan, but that's to be expected given how bad we've been for so long. However, as I always tell everyone, 'Just you wait... the Jaguars best days are in the near future."

"Shad Khan, Gus Bradley and Dave Caldwell are the people who are going to turn this franchise around. Everything they have done so far has been incredible. While I may not agree with all the decisions they've made (personally, I'd have held on to Derek Cox or Daryl Smith) they have a clear plan and they're sticking to it. Plus, getting what looks like four immediate starters (Joeckel, Cyprien, Gratz and Ace) as well as possibly the most exciting project (Shoelace) out of the draft is an achievement I don't think any of the previous regimes would have managed." 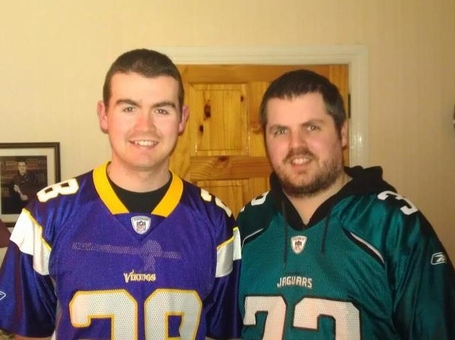 Stevie and his brother who is (unfortunately) a Vikings fan.

Learning about the team is one thing when you're overseas. How is it connecting to the fans?

"I discovered #JaguarsTwitter about a year ago. Before that, I pretty much was the only Jaguars fan I knew of. Being connected to other Jaguars fans has been awesome! I've achieved a much deeper understanding of the team and the city. #JaguarsTwitter is directly responsible for my plans to visit Jacksonville and attend a home game in 2014! I'm also going to Wembley in the fall, so I'm really excited about that!"

"It's weird. I've never been to America, never mind Jacksonville. But last weekend while pretty much everyone I followed on Twitter was at the Jaguars scrimmage, I found myself longing to be there. Just to be involved, to experience the atmosphere. To go drinking with the Bold City Brigade. I will do it some day, I promise!"

Can't wait for you to circle up, nephew.