Jaguars have the 5th youngest roster in the NFL

The Jaguars are one of the Top 5 youngest teams in the NFL.

Share All sharing options for: Jaguars have the 5th youngest roster in the NFL

The Jacksonville Jaguars are going through a complete roster rebuild, which means they're going to gut some of the older players and bring in new blood. Bringing in new blood is something that general manager Dave Caldwell has done well and to the tune of having one of the youngest teams in the NFL.

via Philly.com and the labor of Jimmy Kempski: 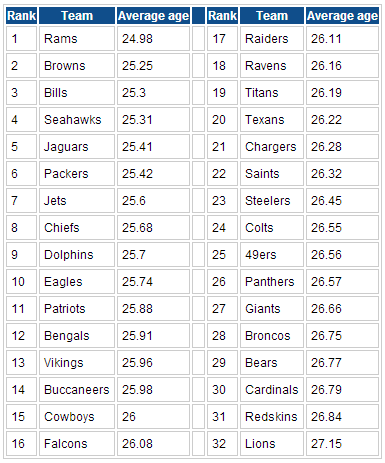 The Jaguars ranking fifth overall isn't a huge shocker, but their roster age average is bogged down by some 30-year old players on their roster like Brad Meester and Uche Nwaneri. The most surprising ranking for me however is the Seattle Seahawks.

Dang, how'd they do that?