Jaguars vs. Raiders 2013: 5 questions with the enemy

The Jacksonville Jaguars and the Raiders kick off on Sunday afternoon. To prepare for the game, we spoke with Levi Damien at SB Nation's Raiders blog, Silver & Black Pride. Read on to see what he had to say.

Share All sharing options for: Jaguars vs. Raiders 2013: 5 questions with the enemy

1. The 'Is Terrelle Pryor the real deal?' question seems like a cliché at this point, so my question instead is: Did you expect him to look so good in Week 1? Also, how much different than 2012 does he look now?

Leading up to his play this preseason, I absolutely did not expect Pryor to play this well. But his performance late in the preseason showed he had improved leaps and bounds from what we had seen from him in years past. His passing was the big improvement and I did expect he would play well. In fact, I expected him to throw the ball better than he did in the opener as it had appeared he had learned not to throw easy floater interceptions. As fleet afoot as he always was known to be, his play in that area actually improved as well. That is a product of his passing threat. 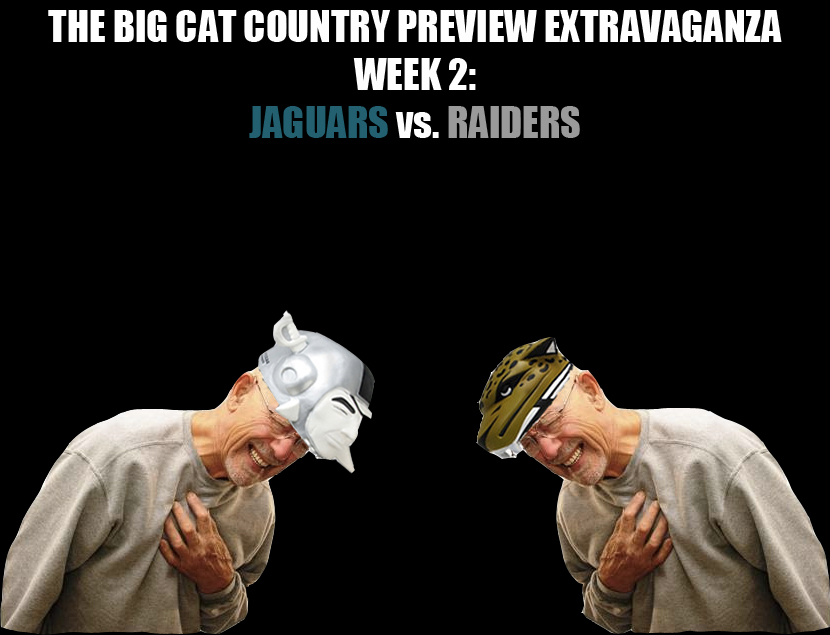 The Jaguars are traveling to the wonderful city of Oakland to take on the Raiders. Big Cat Country has everything you need to know about the game.

2. The Raiders are starting Khalif Barnes and Tony Pashos, the starting offensive tackles for the Jaguars in 2008. When Jaguars fans found out about that they laughed and assumed it would be awful. How does that perception compare to reality?

Awful? No. Pashos looked fantastic in the opener at right tackle. He was the top rated tackle this preseason by Pro Football Focus so he is no joke. Barnes moving from right to left has shown to be a bit of an issue but not a complete disaster (yet). His biggest problems last week were penalties. He also gave up a couple run stuffs. But at left tackle, the concern is pass protection and he actually held up reasonably well in that regard. Then again the Colts don't have much in the way of a pass rush so that may not last.

3. The Jaguars are going to be thinner than usual at cornerback, but prior to the season some said the Raiders wide receiver corps was the worst in the NFL. How good is the group actually, and do you think they can take advantage?

I wouldn't say they are the worst in the NFL. That honor would probably go to the Patriots. But they aren't world beaters. Denarius Moore and Rod Streater both had good games in week one and Streater looks primed to be a very good NFL receiver. Jacoby Ford is a threat but I'm not sure how well he fits what the Raiders are doing right now so his greatest asset will be in the return game. After that it's rookie round seven pick Brice Butler and the oft inactive, Juron Criner. So, not a great group either at the top or depth wise. I see them having games much like they did last week each week. That is Denarius and Streater each getting 3-5 catches for 50-75 yards and a total of 1-2 touchdowns between them.

Keep up with our Jaguars coverage

4. Most were writing off the Raiders in the preseason, but after the game against the Colts, how much optimism is there among Raiders fans now? And is it optimism for the 2013 season or beyond that?

The performance against the Colts did bring cause for some optimism. Simply because outside of pure hope, the Raiders were expected to get trampled by the Colts. The Raiders offense showed some fight and the defense held the Colts without a score of any kind for more than two quarters in the middle of the game. The feeling that this team will go places is still more of a future prospect. The feeling right now is that perhaps clowning for Clowney is less of the discussion.

5. Ever since Reggie McKenzie took over for the Raiders, all that's been said is how much "cleaning of the books" he's had to do to cleanse the team of bad contracts and salary cap issues. Is that project just about done now and are you confident with the way McKenzie is building the Raiders?

That project is indeed complete. There is only one big contract that remains on this team and that is safety Tyvon Branch. He has earned the right to keep his contract. The Raiders have some cap room right now and are set to have a surplus of cap room the likes of which they have never seen come next off-season. That was the plan and it's coming along. I wouldn't necessarily say I am confident in how McKenzie is building the team because teams are built through the draft and thus far his draft picks have not looked good. Last year's draft has produced next to nothing and this year's draft is still pretty suspect.

See my answers to his answers here