Share All sharing options for: Jaguars vs. Seahawks 2013: THE BCC PREVIEW EXTRAVAGANZA 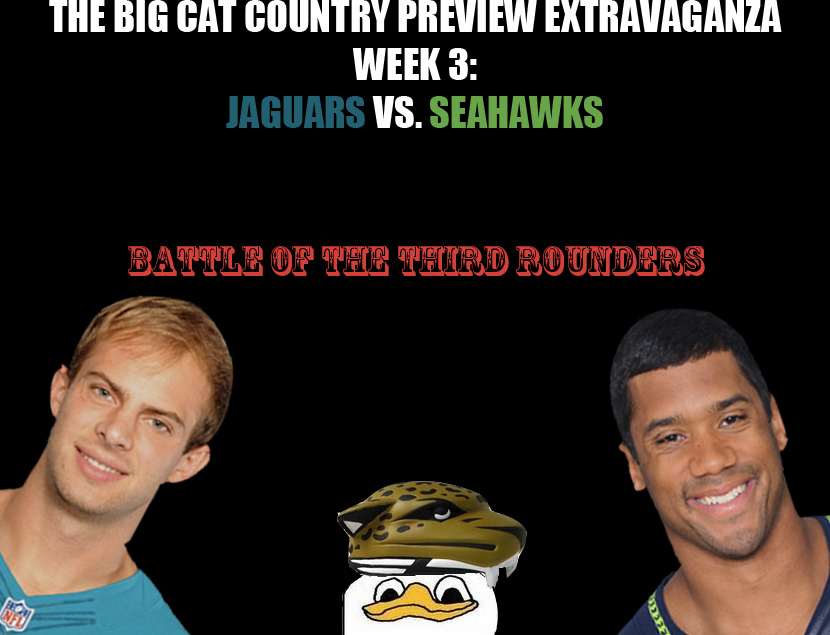 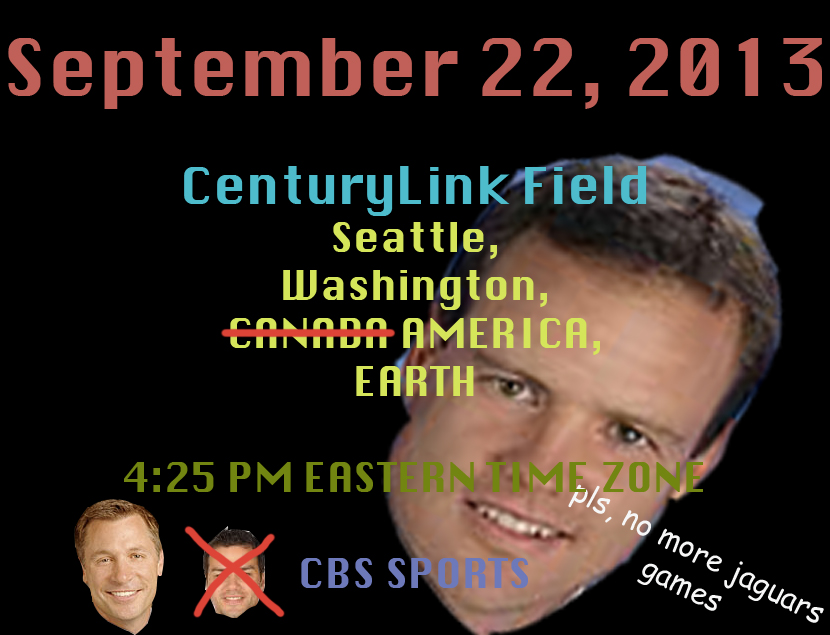 Operation future
This week should be a look at what our front office hopes the Jaguars look like in the coming years. Fast players with unmatched physical skills. We can see elements of that speed and toughness in this year's draft picks. The DBs have ball skills, play press, and hit hard when given the chance. Blam factors all over the place.
Talking with Jeff Kopp and seeing Gus Bradley in interviews, the Pete Carroll tree is full of guys that are motivated to win every single day, every practice, every snap...just maybe not this game.
This can and most likely will turn into Operation Beat Down pretty quickly. Chins up, doe. With most experts expecting the Jaguars to lose by US Military against the Delaware National Guard standards, we shouldn't lose much face. It will be great for Gus to be able to teach off this tape. The two systems are nearly the same but expectations are different.
The Seahawks had those same expectations just a few years ago. Now that their QB is #AllRussellWilsonEverything it's easy to forget that the Seattle coaching staff wasnt sure who would start last year. They traded for Flynn and drafted Russell in the 3rd round. They had QB struggles just like us.
"But Chaps, Seattle has so much more talent than us. We aren't even close." Not today. Not next week. We do have pieces though. We are collecting talent.
We are outchea building a wardrobe. Our fashion sense kinda sucks right now. We have a few high end pieces but mostly we have some well taken care of Kmart and thrift store pieces that we picked up from the NFL Community Yard Sale. Those pieces might not get us on the cover of Elle Magazine but they sure as shit are better than walking around naked like we did last year. Our dicks were exposed at CB, LB, WR, and Special Teams this year. At least we have some nice second hand pjs to rock this year. Next year Levis. The year after, tuxedos, ya bish.
So if our doors get blown off, blown in, or the house completely disappears, this game will be a learning moment. If we happen to win, look out. Im going to go absolutely insane on twitter. I'm have pre-preejactulate just thinking about it.

The Jaguars enter the Seahawks game with an impressive 2-0 record to start the season, mostly in part to 2nd year Quarterback Russell Wilson, whom Gene Smith drafted in the 3rd round of the 2012 draft. In the games against Kansas City and Oakland, Wilson average 9 TDs and 549 yards passing, both franchise and league records. Wilson, through his heroics in 2012, garnered Smith the "Executive of the Year" award for the selection in 2012, plus Mike Mularkey shared co-Coach of the Year with Bruce Arians for taking the Jaguars to the playoffs in his first season. Wilson has been a breath of fresh air since the Jaguars released Chad Henne in 2012 and Blaine Gabbert during this offseason.

Parrish, though rarely used due to the high powered offense led by Russell Wilson, proved to be a true special teams weapon these last two weeks. Averaging a 75.3 yard net and opponent's return of -5.1 yards off of 3 punts, Parrish proved to be a true value find for the Jaguars, being signed as an undrafted free agent in 2013. Parrish, who runs a 4.0/40, also recorded 2 solo tackles on special teams, both for losses, and caused a fumble against the Raiders. It's value finds like this that makes Gene Smith the leagues most envied personnel guy.

The Seahawks signed former Jaguar Jeremy Mincey in March, after the Jaguars released Mincey due to his high salary cap number. Said Gene Smith in the offseason, "we have a lot of great talent and depth at defensive end this year, Jeremy being a solid player with a good motor, but unfortunately we can't keep them all, so [Jeremy] was released." The Seahawks, who are second on the waiver wire to start the year, are rumored to be selecting as many Jaguars waivers as they can. This year alone, the Seahawks have claimed Chris Prosinski, Paul Posluzny, Andre Branch, and Blaine Gabbert, all of whom were waived prior to the start of the season.

Seen as the black eye on the career of former Seahawks GM John Schneider's, 3rd round draft pick Bryan Anger begins the season again as the Seahawks punter. Misguided draft selections like Anger cost both Schneider and Coach Pete Carroll their respective jobs in January. Anger, who struggled mightily in the first two games, attempts to reclaim the promise that came with being such a high draft selection. In the game against the 49ers, Anger out-kicked the coverage on 9 of his 12 punts and averaged only 19.3 yard gross on 21 punts. Anger is mostly known this year for muffing a punt in Week 1, knocking over a Gatorade cooler, which fell on the foot of Pro-Bowl tackle Russell Okung, who subsequently has been placed on injured reserve..

1. Do you really want to think about this?