It seems like the hole at "Leo" on the Jaguars defense has grown larger and larger every week this season, and there seems to be no viable option even on the roster. The Jaguars are very likely to select a Leo in the next 1-2 drafts, and one of College Football's breakout Leo candidates to keep an eye on is Clemson DE Vic Beasley.

Beasley certainly looks passes the "eye test" of a Leo, with a build similar to that of Leo types drafted before him. He is 6’2" with adequate length and appears to have a slim frame and is listed at only 235 lbs, but one of the best things about Beasley is that at times he plays so much bigger than he is, against the run and the pass.

Here is an example, vs NC State in week 4.

Beasley is facing a double team from NC States LT Joe Thurney and TE David J.Grinnage, and combined Thruney/Grinnage outweigh Beasley by 322 lbs. Beasley is able to use good leverage, and upper body strength to hold the POA at the LOS, which is very impressive considering his size.

Another instance showing Beasley's impressive strength is here, where he blows by the TE attempting to block down and he blows up the pulling RG in the backfield. He didn’t show great awareness, but his pure strength and athleticism enabled him to wreak havoc in the backfield and make an impact on the play 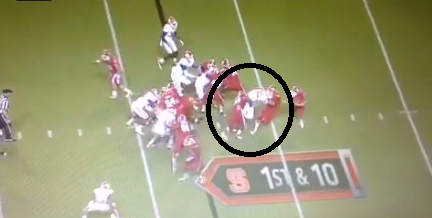 While he does flash impressive skills vs the run at times, he also has a lot of struggles against the run as well, which is expected at his size.

Here, you see Beasley taking on a block from the LT on the bottom of the screen. Beasley is attempting to not only absorb the block, but also fill the open alley to prevent a TD.

Beasley not only doesn’t posses more than above average-average length, but he also struggles to use the length he does have when taking on run blocks. Above you can see him work on the inside shoulder of the LT so he can attempt to fill, but he does not use his length to create any separation/space for himself, and he lets the LT into his frame.

#77 is the LT that attempted to block Beasley, and did successfully. He is able to get into Beasley’s frame, and overpower him. Beasley is easily moved by the LT due to his own momentum, combined with the LT’s overwhelming size/strength. Beasley simply does not have have the size to be able to take OL head on, especially in space, and must be more creative in how he uses his length/athleticism to beat blocks.

Here, Beasley lets the TE into his frame and loses leverage off the snap. The TE is able to move him laterally, opening the running lane and giving the pulling Guard more room to work with. Beasley’s aforementioned lack of great length is yet again a factor.

Here Beasley once again struggles taking on a block while on the move. Instead of shooting his hands to create separation he takes on the block with his shoulders turned to the LOS, losing leverage, which is something he just can’t afford to do at his size. 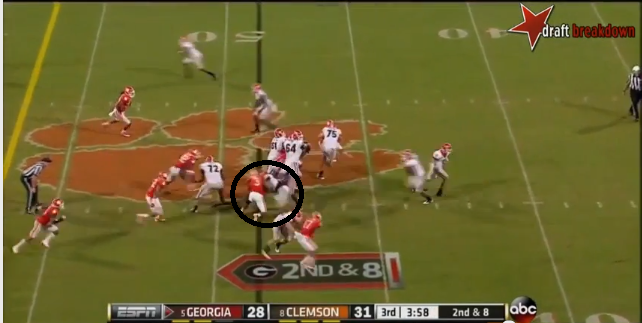 Beasley is stood up by the blocking FB on the same play, and is moved 4-5 yds off the ball by the time the RB is near him. He is put on skates, and is completely unaware what his going on around him. 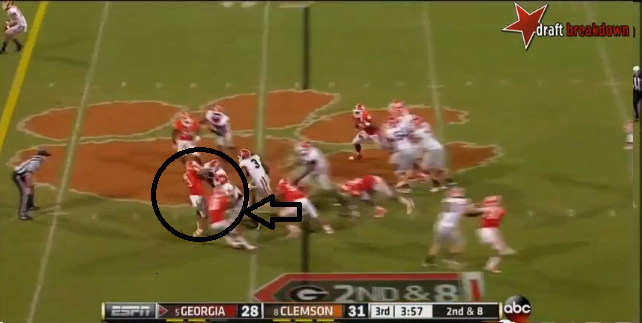 While Beasley is put at a disadvantage when it comes to defending the run at times due to lack of natural length/size, he does not have nearly as many issues when he’s rushing the passer.

Here, Beasley does a good job of shooting his hands to the LT’s chest, winning the leverage battle, and converting speed to power to force the LT off balance. 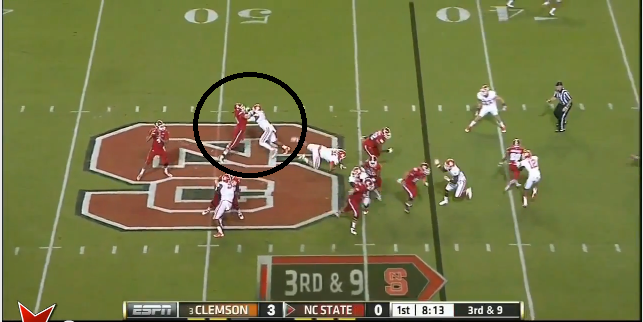 Beasley continues to use his leverage/strength to work his way inside of the LT, where he is now given a clearer lane to the QB. 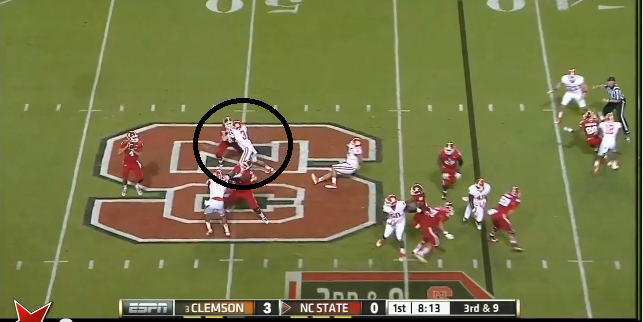 Finally he sheds the LT and is able to pressure the QB into a poor throw. 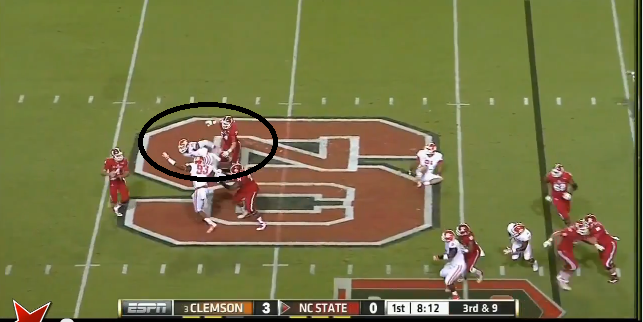 Here, Beasley fails to beat the LT off the ball with his speed rush. 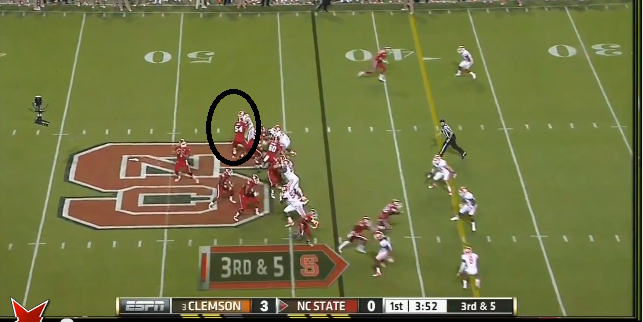 In this type of situation, he must use a counter move to disengage, or use his length/hands to give himself space. He does neither. NFL LT’s are not going to as inferior athletically as most CFB LT’s are compared to Beasley, so he must learn to use counter moves/length/hand usage to give himself more room to attack the edge.

Here is Beasley lined up out wide of the OT, similar to the Leo in the Jaguars defensive scheme.. 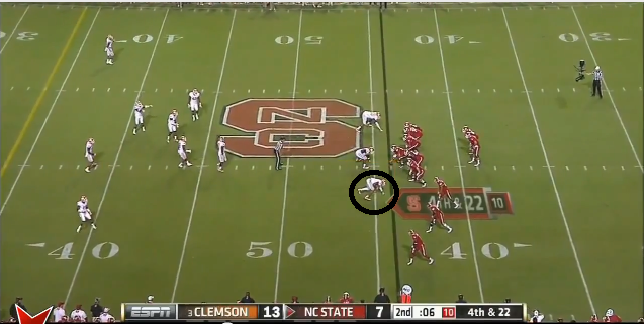 Beasley has a tremendous first step and does a very good job of anticipating the snap.

Beasley does a terrific job of using his speed of the edge + hand usage to free himself and force the LT off balance. 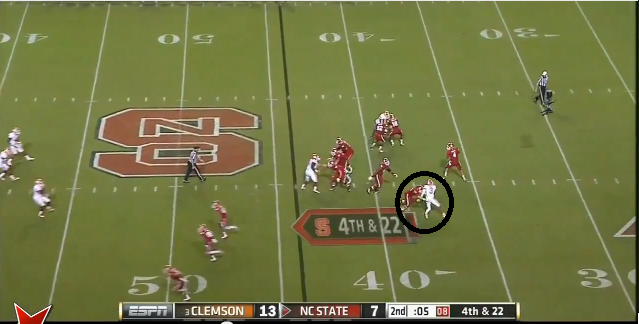 Here Beasley shows flexible hips (He’s not Andre Branch!!!!!) and pinches down on the edge to force the QB to move up in the pocket. If this was not a 3 man rush, it likely would’ve resulted in a sack. 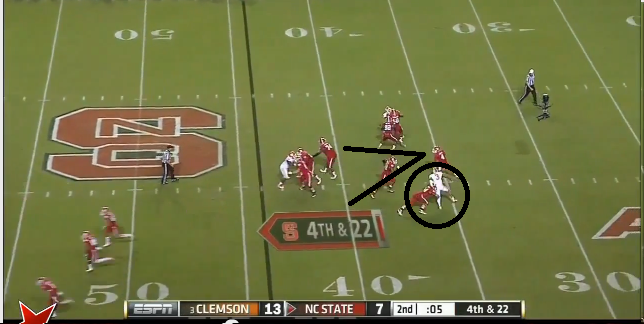 Here is Beasly lining up on the outside shoulder of the LT. 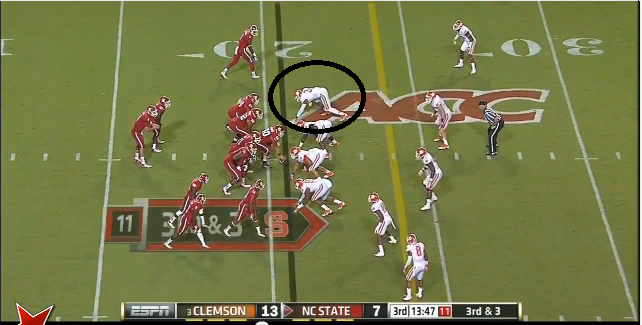 Beasley takes 1 jab step to the outside and keeps his head fixed on the LT’s outside shoulder, setting up an inside move.

Beasley once again flashes his flexible hips, great lateral quickness, and good Change Of Direction skills as he rushes hard inside.

Beasley is tripped up by the RB who was left back to block, but is flexible enough to bend while he loses his balance, and wraps up QB’s legs for the sack. 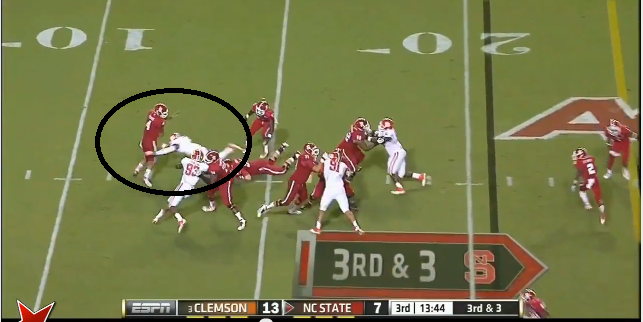 Here, Beasley does a tremendous job of getting under the LT’s pads to win the leverage battle, force him off balance. 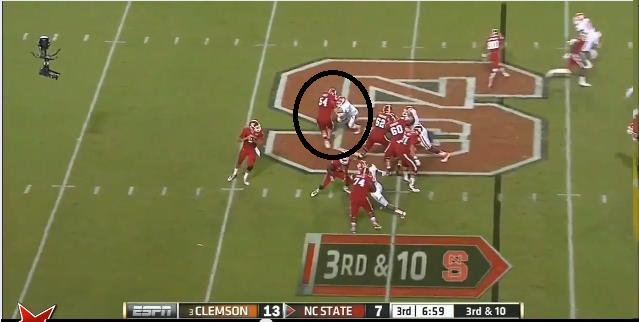 He converts speed to power really well to bullrush the LT into the QB’s lap, wraps up for the sack.

Lastly, I must include this snapshot in here as well. HE. HAS. HIPS. He’s no Andre Branch people.

Beasley is nowhere near a finished product, but he has shown enough this season, and in 2012, to catch scouts eyes. The potential he has is astounding, and he’d be a terrific Leo fit due to how well he wins in space. Expect his name to be a popular one whenever he declares.

Credit to the great people at Draftbreakdown.com who made this article, and almost all of my work, possible.