The Jacksonville Jaguars are back from their long West Coast trip and ready to take on their AFC South rival, the Indianapolis Colts. Big Cat Country has everything you need to know about the game and where the party will be at before the game. Also, BCC has the breakdown on how the Jaguars will use their newest weapon: Tim Tebow.

Share All sharing options for: Colts vs. Jaguars 2013: THE BCC PREVIEW EXTRAVAGANZA 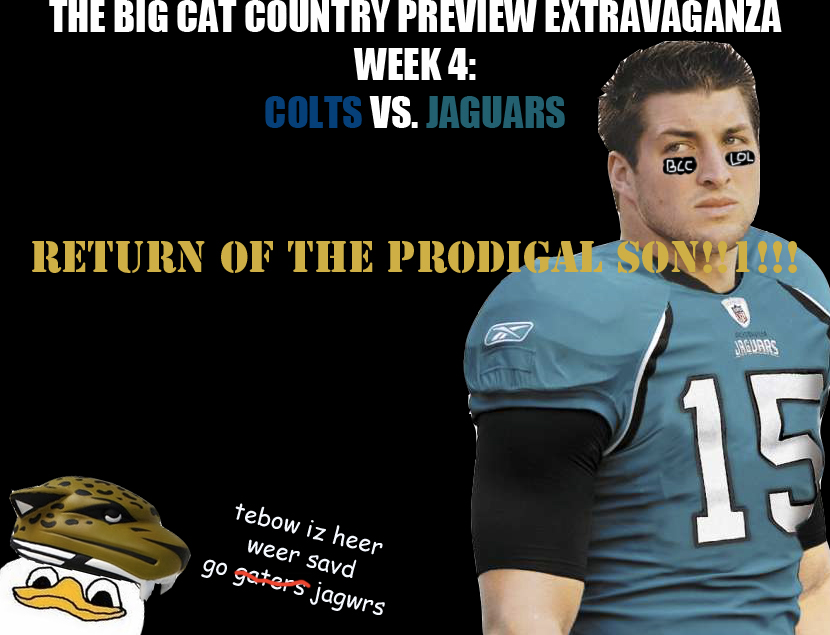 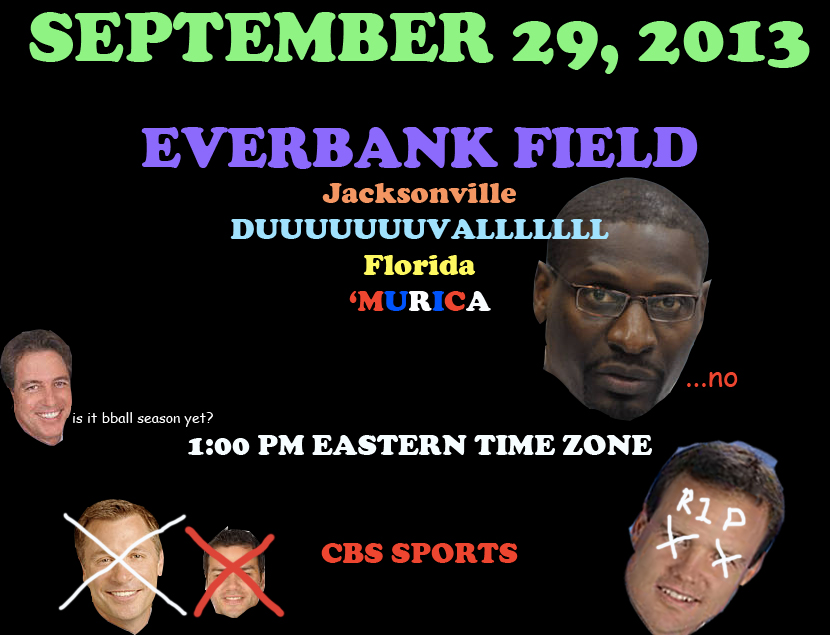 The wait is finally over. Much to the dismay of many fans in the Jacksonville area, the Jaguars signed often-criticized NFL pocket passer Tim Tebow this Wednesday and announced that he would start this Sunday. Tebow's signing marks an intense turn in philosophy for the Jaguars front office. When asked why the Jaguars signed Tebow, Owner Shad Khan looked deadpan into our phones and said, "Why not?" Stoic.

By all accounts, the Jaguars had an amazing day of practice yesterday. A majority of the offensive line issues were fixed during a 25 minute huddle shortly after Tebow began taking snaps with the first team. After explaining how the loaves and fishes story can translate to blocking, Tebow repeated his famous speech from the University of Florida. Mike Brewster was asked about Tebow after the practice. "Awesome" said Brewster as he drove by, not wanting to get interviewed.

The smile of Maurice Jones-Drew's face was toothy to say the least. Jones had just heard a hilarious joke. This doesn't really have anything to do with Tebow but it was nice to see him smile again.

The Colts, led by Peyton Manning, are off to their best start this year. Peyton, filling in for Denver on Monday Night Football, threw for 7 touchdowns and no interceptions. Marshall Faulk will be out this week so look for rookie Trent Richardson to get a few snaps.

Score prediction: 18-18. This game will be a tie. No question about it.

CAST OF THE ONE TRUE CHARACTER

An Ode to a Saviour, by special BCC guest writer: King James

Oh beautiful Timothy, thou art wondrous in thine being;

A mount upon a cliff upon a rock of righteousness.

Weren't thou not the saviour of the Alligators?

Weren't thou not the hope of the Panthers?

Now thy majesty inhabits the towne of thine birthright; the citycenter of thine faithful supporters.

From the earth you extendeth thy arm towards the heavens,

Thine hand releaseth the pigskin and it soars beyond the hills of Callahan through the forests of Tennessee and beneath the cover 2 zone and lands gracefully into the soft hands of your worker.

Whenst the evils of the Jaguars front office thwarted thine plans on serving your people ye proclaimed from the highest mount "FOR THIS IS MY CITY. I AM THE ONE. I SHALL NOT BE MOVED!"

The towers fell, the brigadiers quivered, the Khan cried out to you saying "I am thine humble servant, Master. Lead me as you lead others, will me as you will others!"

The people need you;

ALL SHALL EXCLAIM IN ONE VOICE "HE IS WHO WE SO DESIRE!"

All shall see thine character.

All shall sing a new song: "Tis So Sweet to Trust In Tebow"

OH SAVIOUR! My only Saviour.

WHAT TO WATCH FOR (BESIDES TEBOW BUT ALSO TEBOW)

The Jacksonville Jaguars went ahead and did it, so now it's time to not waste the signing. Free Tebow and free him good. Jump passes and all those other things that he did with the Gators en route to a Heisman Trophy and two National Championships. Let Tim Tebow be Tim Tebow. Want to know why it didn't work in New York and New England? Easy. They held him back.

Don't make Tebow do what he's not built to do. Let him improvise, run people over and lead a rushing charge that we all know the Indianapolis Colts will be unable to start.

With the addition of Tebow, it's already a given that EverBank Field will be full. And I'm talking reeeal full. What's going to make that even crazier? Beer.

Can you imagine The Swamp with 80,000 people receiving free beer? It'd be downright crazy. I can only imagine the debut of everyone's favorite Florida quarterback in his hometown will resemble that amount of craziness even without free beer. Pace yourselves, everybody.

On that note...#FreeJorts might be a good idea too. 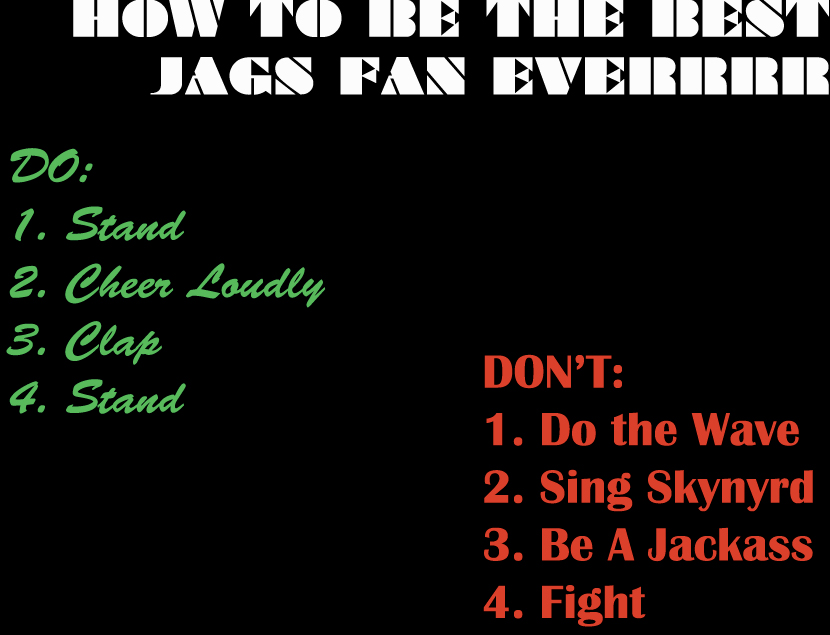 So Gilbert right here is modeling some teal yoga pants whilst tailgating. Not sure, but Gilbert may have 'JUICY' emblazoned over both of his buttcheeks with rhinestones.

Besides being moisture-wicking, these pants are 'form-fitting' and provide adequate support because... because... your butt needs support(?).

While incredibly impractical due to their lack of pockets, these pants allow you to move in a manner in which you'd look graceful and stuff and not totally douchey because what makes you even say that bro HOUSE MUSIC!

Unlike the jumper from the first home game, it takes a bit of panache to pull these off because walking around shirtless at a tailgate is one thing, but wearing yoga pants whilst doing so is an entirely different endeavor AVICII LEVELSSSS!

Also, BRO, DO YOU EVEN LIFT, GILBERT BRO? LOOKS LIKE YOU SKIPPED LEG DAY.

2. THEM COACHIZ DON' NO HOW TO USE TEBOW DA RAIGHT WAY! THEYS THINK THEY SO SMART WATCHIN FEELM ALL DAY LAHK BATS INA CAVE!

5. WILL MUSCHAMP SURE LOST A LOTTA WEIGHT DOWN ON DAT THERE SAHDLYN, BLESS HIZ HEARDT. HE DON'T EBEM LOOK THAT ANGRY!

6. LEX AND TERRY GOT CANCELED? SHOOTDAMN 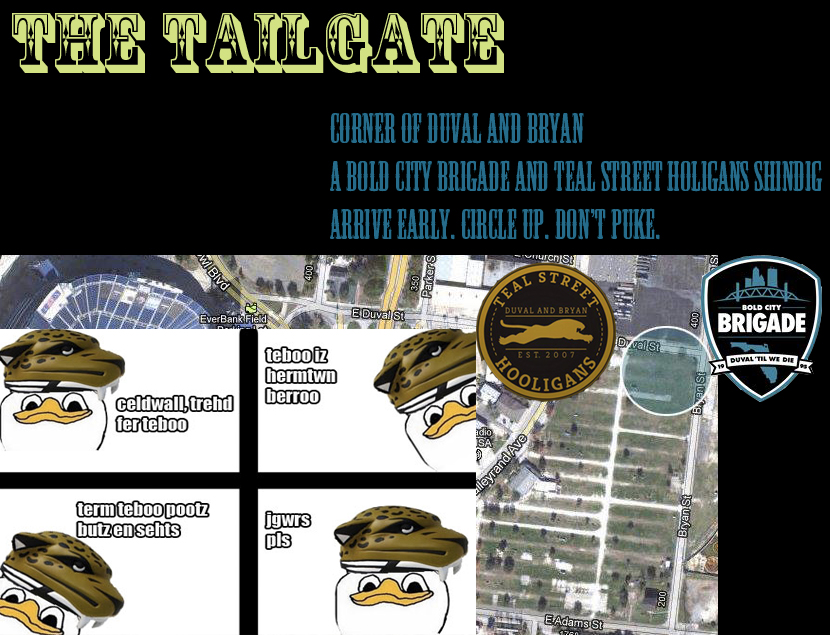 This is obviously satire.

Colts vs. Jaguars: Everything you need to know